Lies and the Lying Feminists Who Tell Them: the latest from Christina Hoff Sommers | Bitch Media

Lies and the Lying Feminists Who Tell Them: the latest from Christina Hoff Sommers

“Feminist misinformation is pervasive,” Christina Hoff Sommers writes in today’s Chronicle of Higher Education.“Persistent Myths in Feminist Scholarship” is the latest from the author of Who Stole Feminism: How Women Have Betrayed Women and The War on Boys: How Misguided Feminisim is Harming our Young Men, adding to her legacy of anti-feminist feminism and raising a stink over the contemporary feminist movement in academia.

Sommers criticizes (not for the first time) errors in the women’s studies books Domestic Violence Law and The Penguin Atlas of Women in the World, both well-known and acclaimed texts in women’s studies. Sommers does make the point that “One reason that feminist scholarship contains hard-to-kill falsehoods is that reasonable, evidence-backed criticism is regarded as a personal attack.” But rather than explaining this claim with more substantial and researched evidence, she only continues to cite specific, and at this point over-used, examples (which frankly do border on personal attacks) from her past books, lectures, and articles.

It’s certainly a problem that errors exist in textbooks—feminist or not—and I have to agree, “Students deserve better. So do women victimized by violence.” But as Heart at Women’s Space rightfully points out:

Sommers might have some shred of credibility if she ever took a look at any of the glaring errors to be found about women, women’s issues, women’s history in a gigantic number and array of revered and honored college medical texts, legal texts, psychology texts, science texts and history texts. But she is, again, oblivious to these and worse than that, doesn’t acknowledge the way they oil the patriarchal machine and keep it functioning, the way that it would take an avalanche of college texts making exaggerated feminist claims to begin to make a dent in the way the system favors and benefits men.

(And this was written in January in response to Sommers’ lecture “What’s Wrong and What’s Right With Contemporary Feminism,” a portion which is reposted on Feminist Law Professors). Heart’s response is just as fitting and accurate to the recent Chronicle piece as it was to the lecture.

Similarly, Laura Flanders’s criticisms of Sommers on FAIR (Fairness & Accuracy in Reporting), written in 1994, are equally valid years later: “[Who Stole Feminism] is filled with the same kind errors, unsubstantiated charges and citations of ‘advocacy research’ that she claims to find in the work of the feminists she takes to task.” In the Chronicle article, Sommers cites other female professors’ work (specifically Christine Rosen, Noretta Koertge, and Daphne Patai). Just who am I supposed to believe in academia anyway?

Bitch readers might remember the Insider/Outsider issue’s article “I Can’t Believe it’s Not Feminism” by Julie Craig, a Who’s Who for anti-feminist “feminists” which featured both Sommers and Daphne Patai (mentioned above–it’s not surprising she passed Sommers’s test for a credible source). Craig touched on Sommers co-optation of liberal vs. radical feminists debate into “equality vs. gender feminists,” and how women’s studies have always been “a particular bee in Sommers’s bonnet”:

[Her] shortsighted analysis ignores the diversity of women’s studies faculties and the existence of other critics of classroom radicalism, and her generalizations do not paint an accurate picture of feminist education any more than they adhere honestly to the realities of feminist philosophy.

Sommers hasn’t changed her tune in the seven years since, and “Persistent Myths” continues to recycle her claims leveled against women’s studies. She actually asks “Are there serious scholars in women’s studies?” It turns out that yes, there are, as Hoffman cites THREE women’s studies professors who are “models of academic excellence and integrity” but claims they are “exceptions to the rule.”

I have some brief criticisms of my own on Hoffman’s three-point conclusion on “Persistent Myths.”

1) False assertions, hyperbole, and crying wolf undermine the credibility and effectiveness of feminism. The United States, and the world, would greatly benefit from an intellectually responsible, reality-based women’s movement.

My first inclination was to concede–this seems like a valid statement, give it a green checkmark. But taken in context of Sommers’s work, it’s merely a feminist cloak over a more conservative viewpoint. It’s impossible to argue that the feminist movement shouldn’t be “intellectually responsible” and “reality-based”–it’s undebatable that we should be guided by integrity and righteousness. But this statement represents Sommers’ view of feminism as a monolith, and discounts the critical diversity within a sprawling multi-generational, transnational, and all-around multi-faceted movement.

2) Over the years, the feminist fictions have made their way into public policy….President Obama recently issued an executive order establishing a White House Council on Women and Girls. … He and Congress are also poised to use the celebrated Title IX gender-equity law to counter discrimination not only in college athletics but also in college math and science programs, where, it is alleged, women face a “chilly climate.” The president and members of Congress can cite decades of women’s-studies scholarship that presents women as the have-nots of our society. Never mind that this is largely no longer true. Nearly every fact that could be marshaled to justify the formation of the White House Council on Women and Girls or the new focus of Title IX application was shaped by scholarly merchants of hype.

Feminism inspiring national policy and wide-sweeping change? Not on Sommers’s watch! I think she’s actually advocating against the White House Council on Women and Girls, seeing as gender inequity is no longer an issue. From Hillary Clinton’s bid to presidency to recent CNN articles, I’m sick to death (as I’m sure most of you are) of the post-feminist world myth. Though I suppose if you’re one to defend Larry Summers, you would think Title IX is a relic from the past.

3) Finally, as a philosophy professor of almost 20 years, and as someone who respects rationality, objective scholarship, and intellectual integrity, I find it altogether unacceptable for distinguished university professors and prestigious publishers to disseminate falsehoods. It is offensive in itself, even without considering the harmful consequences. Obduracy in the face of reasonable criticism may be inevitable in some realms, such as partisan politics, but in academe it is an abuse of the privileges of professorship.

Now that’s just pretentious. And I have to go look up “obduracy.”

Sommers quotes Joel Best as saying that a bad statistic is “harder to kill than a vampire,” and it’s hard not to see anti-feminists in the same, bloodsucking, undying sense.

So…what is the telos of Christina Hoff Summers' work? In other words, what is the goal of her scholarship? What does she hope to accomplish? If she is a champion of rationality and an opponent of falsehood, why not take it on more broadly? Why just within feminism? I have to admit I don't read much of her work from source, so I'm always left with these types of questions after I read about the types of arguments she makes.

I posit that her work reflects a way in which female philosophers are ghettoized to critiques of other female academics, and more specifically confined to critiques of feminism (i.e., ladies’ work). You know where she would find a really great set of tools to speak back to that ghettoization? Feminism, oddly enough.

It's really a study how generalized these attacks on Sommers are. Did anyone associated with this article or the FAIR piece actually read her book? The substance of this rebuttal seems to be - she doesn't respect the glorious movement enough. I suggest, in the interest of fairness, you give readers a chance to peruse Sommers devastating rebuttal to FAIR's nitpicking. False statistics, such as Sommers points out, really are disturbing. They deserve a thoughtful response. Here's Sommers' response. 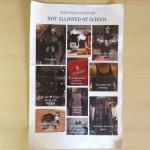 by Sarah Mirk
Policing the length of shorts and skirts takes girls out of class. But Portland Public Schools just passed a student-written dress code they hope will be a model for the nation.