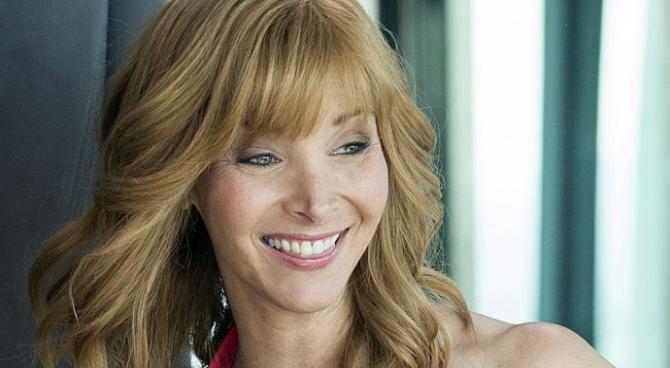 Television has changed a lot since 2005. For one, social media and online streaming have changed the way TV is made and consumed, allowing underrated shows to sometimes find a cult following online. That’s the case of The Comeback, the satirical HBO comedy starring Lisa Kudrow that was revived from the dead last fall nine years after it was axed. The long-overdue second season of The Comeback, which wrapped up at the end of December, shows while the industry has evolved, for women working in TV, not much has changed since 2005.

The first season of The Comeback followed “aging” actress Valerie Cherish (Lisa Kudrow) as she began dual rules on a sitcom called Room and Bored and a reality TV show about her comeback (also called The Comeback). On Room and Bored, Valerie starred as Aunt Sassie, the landlord of her niece and her host of friends. Throughout the season, Aunt Sassie’s role was changed from hip older roommate to weird old relative who lives upstairs and has the catchphrase “I don’t want to see that.” During the show’s run, Valerie tried to make the best out of what was truly an awful sitcom, but was ultimately powerless in the face of the younger stars on the show and sexist male writers. 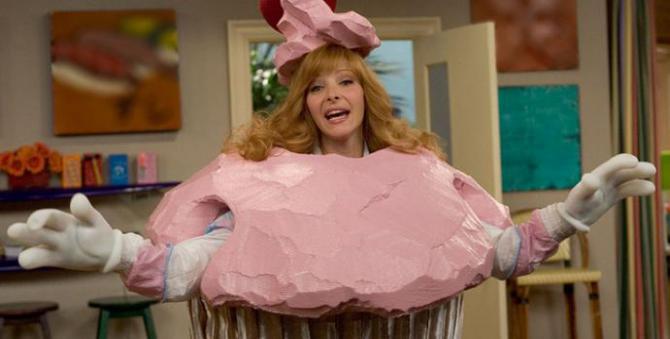 Yep, being forced to wear a giant cupcake costume isn’t humiliating at all.

In one scene, during a late night writing season, Valerie decided to bring the writers cookies. She is shocked to find the writers jokingly miming having sex with her, with one of them wearing an orange t-shirt on his head that symbolizes Valerie’s “signature” red hair. The one female writer on set sits in the corner, looking a little uncomfortable. Instead of standing up for herself, Valerie tries to laugh it off, like she’s a “cool girl” who doesn’t mind being made fun of by the boy’s club. On one hand, it is easy to view Valerie as a pawn being manipulated by the very industry she so desperately wants to be in. At the same time, the show clearly begs the question of whether Valerie would still have a job if she stood up for herself.

The second season of The Comeback found Valerie unemployed, but still optimistic that she will find the perfect role and rise to stardom. Following the late 2000s success of everyday reality shows like Jersey Show, Valerie reenlists a crew to film her life with the hopes of getting a show on HBO, aka her comeback comeback. Instead, Valerie ends up being cast in a dramedy about Paulie G. (Lance Barber), arguably the most sexist of the screenwriters of Room and Bored. The “fictional” show follows Mitch, a TV writer (played by Seth Rogen as Seth Rogen), as he spirals into drug addition while writing for a sitcom. In the show, the constant berating of an aging female actress forces this “innocent” writer to begin using drugs. 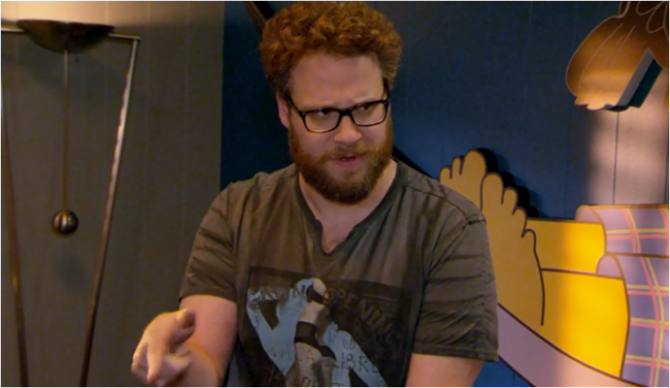 With slight name and plot changes, the show, aptly titled Seeing Red, is a thinly veiled, though very meta, retelling of the first season of The Comeback, but now through the perspective of the male screenwriter (whose perspective, of course, is underrepresented in television). Valerie is understandably upset over the show, but is finagled into auditioning for Seeing Red and ends up playing pretty much herself.

Valerie was being taken advantage of in Room and Bored and in Seeing Red she is stuck playing the worst possible caricature of herself.  She is characterized as both an annoying spinster who caused Mitch’s drug problem and as a sexual object to fulfill his daydream fantasies. In one scene, Valerie wears a green screen suit in order to portray a monster destroying Paulie G.’s inner child. While Valerie tries to distant herself from the character by adopting a different voice, Paulie G. responds, “You’re the monster Val,” as if there is no separation between Valerie and her horrible characters.

And this is the most frustrating, if not enlightening, part of The Comeback. It is easy to yell through the TV screen at Valerie when she allows herself to time and time again be manipulated by writers, producers, and the media. In one episode, while interviewing with a roundtable of bloggers, Valerie defends Seeing Red and says, “I just think there are so many parts for women in TV right now, and it’s just wonderful.” It should of course be noted that like Seeing Red, The Comeback is on HBO. While this line highlights Valerie’s naivety, it is also a not so ambiguous jab at the network (Game of Thrones, anyone?).

Of course, the point is that Valerie is a proponent of the very system that makes roles like Aunt Sassie. But viewing Valerie as merely a Hollywood pawn undermines her as both an actress and a woman. Sure, Valerie is on a show that portrays her as an over-sexualized, aging monster, but she knows how, and when, to fight her own battles. On Room and Bored, she constantly berated the writers about giving her more lines and consequently giving Aunt Sallie more of a voice. The fact that a women standing up for herself is what turned Paulie G. into a crack addict is pretty far-fetched, and if so, he should just go join all the other men’s rights activists complaining about equality hurting their fragile egos.

During the filming of the reality show, Valerie continues to constantly stand up for herself. While the documentation of Valerie’s everyday life seems a little vain, it also allows her to take back the control that she doesn’t have on Room and Bored or Seeing Red, where she’s forced to follow the direction of mostly male writers, producers, and directors. Valerie specifically enlists the same filmmaker who filmed her for her reality TV in the first season to “come back” for her HBO documentary in the second season. When Valerie does not want something to be recorded, she tells her team to stop, and they usually do. While Valerie does control what is filmed in order to portray her personal life, particularly her failing marriage, in a positive light, for a change, it’s her opportunity to shape the way people see her character.

Consequently, it says a lot about the current state of Hollywood that Seeing Red becomes both a commercial and critical success while not much is heard about Valerie’s reality show. The fact that Valerie has now had not one, but two comebacks highlights the difficulties that real-life female actresses face. Valerie could easily be a fictional Molly Ringwald, a fellow redhead criticized for her comeback in The Secret Life of the American Teenager.

There is also a little bit of Valerie in Winona Ryder, who despite receiving critical acclaim for her rule in Black Swan, played a disillusioned, aging dancer competing with younger ballerinas, not a far cry from Valerie’s Seeing Red character. Kudrow herself rose to fame with the success of the sitcom “Friends,” but after a string of insignificant roles, has now only had her own “comeback” with The Comeback.

These real-life examples just go to show that Hollywood has a real problem writing characters for women, specifically those past the age of 30. The fact that HBO, a network that is mostly white and mostly male, released a show like The Comeback proves that there can be roles for women like Valerie that fit alongside true detectives, mobsters, and dudes killing each other with swords.

Related Reading: The Comeback and the Radical Notion that Women are Human.