Thousands of people attended weekly “Moral Monday” protests at the North Carolina state capital this year, speaking up against voter ID laws, for protecting abortion access, and for decreasing income inequality. Now they have a soundtrack: a group of North Carolina artists have put together an album inspired by the protests called We Are Not For Sale.

The Moral Monday protests garnered national media attention as it gathered outside the Raleigh capitol building every Monday for eight months. While right-wing political groups have done a bang-up job over recent history of linking religion with conservative political ideals, the NAACP of North Carolina joined with local religious, feminist, and labor groups to push a different message: that legislation which limits voting rights, rejects Medicaid expansion, and threatens women’s healthcare is amoral.

The protests are now spreading to other states. This week, news came out that both Georgia and South Carolina will be holding similar protests focusing on those states’ rejection of federal Medicaid dollars, which will leave millions of poor people without healthcare coverage.

The album came about when, after attending one of the Moral Monday protests, artist Django Haskins wrote a song called “We Are Not For Sale” and posted it online. Other musicians saw the song and, soon enough, decided to form a group called North Carolina Love Music Army. Their album We Are Not For Sale: Songs of Protest came out at the end of November, with proceeds benefitting Progress NC and Planned Parenthood of Central NC.

One of the songs on the album is “My Body Politic,” a collaboration between artists Caitlin Cary and shirlette ammons. The lyrics are a clear call against the many laws rolling back access to abortion across the country:

Any attempt to control our bodies, we poised to fight it
Gone blame the system, that’s accurate
But we claim our inaction that’s activist
Our body’s not a target
Yet it’s under attack
Forward together
Never a single step back
We are the head of this body
We are the heart of this body
Your laws don’t rule this body
Ain’t nobody left for you

“It’s a simple melody, and the words are simple: a resounding rejection of political control by any political body over our physical bodies, and a sort of a battle song to holler together as we charge against immoral laws,” says Caitlin Cary.

Check out this video of “My Body Politic” below—it’s a dang catchy protest song.

The brighter side of oppressive legislation... we get some great art out of it, and the Love Army appears to be one of the great political art movements of our time. This song is a gift to me, and to my two young daughters. 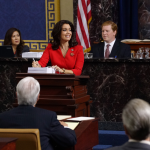 by s.e. smith
Shonda Rhimes' show goes where TV rarely dares to explore: a political and personal discussion of abortion.