"Locked Down, Locked Out" Shows How the Prison System is Rotten to Its Core | Bitch Media

“Locked Down, Locked Out” Shows How the Prison System is Rotten to Its Core 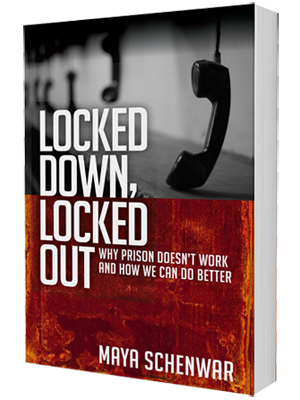 “Prison stays in the shadows because it’s built to stay in the shadows,” says Maya Schenwar, the author of Locked Down, Locked Out: How Prison Doesn’t Work and How We Can Do Better, a new book out this week that offers proactive ideas changing America’s atrocious approach to incarceration.

Reading and writing about prison issues is usually frustrating. The reality is this: people who aren’t locked up would rather not think about prison. When media does take time to talk about prison issues, people often become numb to the numbers. You can beat people over the head with graphs and charts that show how the way we imprison people is hurting the country more than it’s helping, but statistics don’t conjure up empathy. It feels like a stalemate: clearly there are problems, but there’s not much momentum to change the status quo.

Locked Down, Locked Out breaks through this disinterest in a couple pointed ways. The first is that talks about prison through a personal story. Schenwar, a journalist who is the editor-in-chief of Truthout, frames the book around the way her family deals with the arrest of her sister. In most stories about jail, the incarcerated person at the center of the story is innocent or different than the “bad inmates” in some way. But Schenwar’s story feels honest because her sister is not that way—her family acknowledges that she has drug problems and even at one point feels safer knowing she’s in prison than running around on her own.

The family’s attempts to help the sister turn her life around illustrate many of the small failings of the prison system. Just visiting a family member in prison turns out to be a monumental task: her sister is housed in a prison hours away, visiting hours are inconvenient, the wait to get in to see her is hours long, the cost of making phone calls is exorbitant. Why are visiting family members berated by prison staff? Why aren’t they even allowed to bring a book to read in the waiting room? From bottom to top, prisons are run in a way that seals off incarcerated people from society and keeps them invisible.

Even once someone is released, they’re part of a system that often locks them out of a future: difficulty getting housing, healthcare, education, and a job lands many people (including Schenwar’s sister) back in prison again and again. “Unless you’re Piper Kerman, it’s very hard to get out of prison,” said Schenwar, when I talked to her a few weeks before the book debuts. The year she spent researching the book was not a happy one. “I expected this year to be this really exciting time of discovery and it was, but I was also really sad a lot of the time,” she said. In addition to her sister’s story, the book is filled with personal anecdotes from in-person interviews with social justice advocates, conversations with families of incarcerated people, and letters from people in prison. It’s easy to see why the research would make Schenwar feel grim. “Absence makes the heart grow colder, not fonder,” Marcos Gray, an Illinois prisoner writes to her. A man in Louisiana’s Angola prison describes incarceration as being “held outside of time itself… a sort of stasis, akin to being trapped in amber.” “What does the feeling of abandonment do to people?” wonders Schenwar, in her book. And what does it do to the rest of society that we abandon thousands of people a year? Schenwar writes:

“Prison’s role in society, the logic goes, is to toss away the bad eggs, so that they can’t poison us—so we don’t even have to see them. With those eggs cleared, we seamlessly close up the gaps and carry on, clean and whole. The surprise pops up when the broken seems are revealed—the way incarceration rips open new holes in the social fabric of families and communities outside, severing intricate networks strung together in ways that are observable only upon their breaking. Instead of eggs, we are tossing away people’s mothers, fathers, daughters, songs, brothers, sisters, partners, friends.”

These stories add up to the second major point the book makes well: that prison affects everyone in America, not just the people who are locked up. It’s a recent development that prison has become an issue that media actually covers. Stories about solitary confinement, inhumanely long waiting times before trials, and immigrant detention centers have all been front-page news at major outlets in the past year. But as specific abuses get attention, says Schenwar, it’s important to focus on the reality that fixing a few egregious things about our prison system will fix not the whole thing. As thousands of people get up in arms about the arrest of one person at a protest, for example, the reality that over 30,000 Americans are arrested every day can seem way too big to comprehend.

“The system is rotten to its core; the foundation is violent and unjust,” said Schenwar. “We’re not looking for cracks in the wall but wondering, ‘What would an entirely different house look like?’” That mindset makes writing about solutions to prison a very difficult task, but the second half of Locked Down, Locked Out does it well. Several chapters highlight the work people are doing right now to chip away at the status quo. From working to abolish solitary confinement to reducing the cost of phone calls in prison, the focus on proactive solutions feels oddly uplifting.  People across the country are actually finding ways to slowly unravel what seems to be an impossibly knotty problem.

Related Reading: How Many Women Are In Prison For Defending Themselves Against Domestic Violence?

Sarah Mirk is Bitch Media’s online editor. She has a pretty cool Black and Pink pen pal, too.