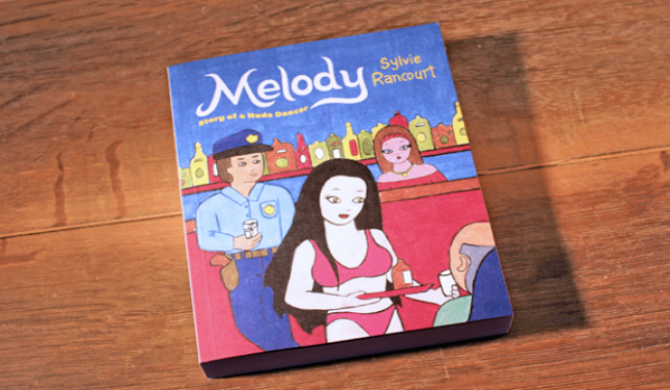 In the mid-1980s, Sylvie Rancourt worked as a dancer in a strip club in downtown Montreal. In her downtime, she drew comics about her life.

At the time, autobiographical comics were not common. This is before the days when you could walk into any Barnes and Noble and find a long shelf of personal nonfiction comics. Rancourt was drawing about her life in her own raw style and she was doing it almost entirely on her own. This summer, her unique and engaging work is finally getting the attention it deserves: Drawn & Quarterly published a 350-page collection of her comics, Melody: Story of a Nude Dancer.

In Rancourt’s stories, written originally in French and drawn in a bold black-and-white style that reminds me of Persepolis author Marjane Satrapi, her alter ego Melody deals with the ups-and-downs of being a young woman trying to get by without a lot of money or life experience to her name. She grapples with penny-pinching customers, a ne’er-do-well boyfriend, and the eternal question of what she should do with her life. The writing feels honest and personal. Though Melody gets vulnerable about her problems, the stories have an upbeat, comedic tone to them, always ending on a high note. 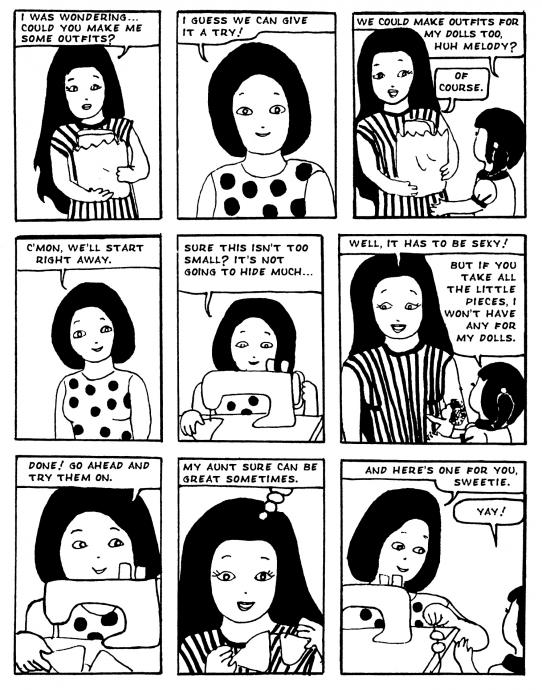 Rancourt hand-drew the comics, then printed up several hundreds copies and sold them “table to table” in the clubs where she worked. Eventually, she created six magazine-size collections of the comics and asked Canadian cartoonist Jacques Boivin to draw full-color covers. The magazine-size comics were picked up for distribution and were sold on newsstands across Quebec. At the time, comics legend Chris Ware encountered Melody in Chicago indie comics shop Quimby’s Bookstore and was so taken by the art that he remembered Melody for years even though he couldn’t read the French text. Ware wrote the introduction to this new English-language collection. “Finally getting to read the story after all these years was an eye-opening experience because the book is even smarter, more interesting, and more sophisticated than I’d ever guessed,” he writes. In the introduction, Ware notes that Melody is reported to be the first-ever autobiographical Canadian comic.

Rancourt was ahead of her time in another way: Her treatment of sex work is refreshingly progressive. Rancourt presents life in the strip club without shame or judgment, instead reveling in the humor of the job and bemoaning the daily downsides of greedy bosses and needy customers. Rancourt doesn’t shy away from drawing naked bodies and intimate moments in these stories. Nipples, genitalia, and sex are all rendered with no sense that they’re scandalous—the drawings are a simple reflection of real life and, in real life, people get naked. Melody and her coworkers clearly love their bodies, but at the end of the day, they’re all onstage because they need to make a buck—just like any other job. 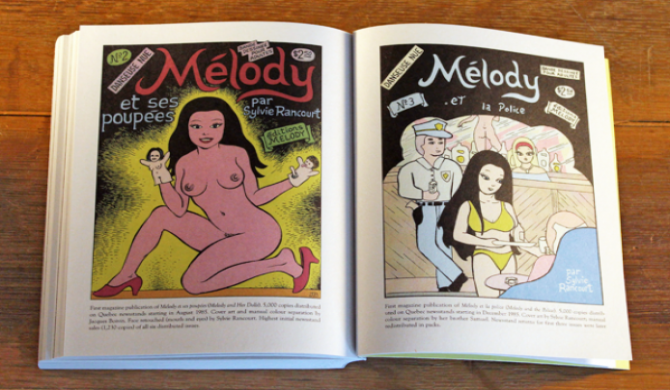 Her comfortable attitude certainly drew many readers to the comics. But it also garnered her some pushback. In the early ‘90s, according to writer Rick Trembles, Family Circle magazine dismissed Melody as  “pornography in the guise of cartoons.” Shortly after this statement was published, Jacques Boivin told Trembles, four employees of small Toronto comic book shop Planet Earth were charged with “possession and sales of obscene materials,” following a complaint about Melody. The owner of the store was unable to appeal the charges and closed down. Rancourt herself stopped writing and drawing Melody after six issues. The boxes of comics returned unsold by newsstands started to pile up in her apartment and, she told Ware, the floors started to crack under their weight. “I woke up in the night and I could hear the creaking. I could not go back to sleep, so I decided to stop,” she said. After 10 years as a dancer, Rancourt moved to a farm, where she has since focused on painting and raising her four kids with her husband.

Reflecting on the effort it took to bring Melody into my hands, I’m not going to take for granted that I can read this wonderful collection thirty years after the stories were first drawn—and that comics shops can shelve them without having to worry that selling sex-positive autobiographical comics will get them shut down. Praise for Rancourt’s work is decades late. Here’s to hoping that she finally gets the acclaim and international readership she’s due.

Related Reading: Recognize That Sex Work is Work — A Conversation With Melissa Gira-Grant.