Lookism: OK If It's at the Hands of a Multinational Corporation | Bitch Media

Lookism: OK If It's at the Hands of a Multinational Corporation 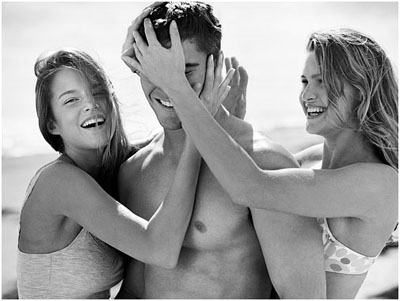 Mary Elizabeth Williams doesn't want to be sold pants by an ugly person. In her recent article for Salon, Williams maintains that the appearance-centered hiring practices and employee regulations of retail giants American Apparel and Abercrombie & Fitch are just, you know, logical and unproblematic corporate tactics to uphold and brands' image. They're not lookist, they're not racist, and they're not sexist. Based on the evidence, though, we can't give her analysis that much credit. What Williams, a staff writer at Salon, is critiquing is a slew of what she calls "self-righteously naive" Gawker stories on the practices of both companies. In June, Gawker posted internal documents wherein American Apparel executives clearly outlined how the employee's clothing, jewelry, hair, eyebrows, facial hair, and makeup should look. Since then, Gawker has routinely posted the allegations of lookism by employees, not to mention a number of solid examples of blatant racism and sexism against both current employees and applicants. On Monday, Gawker posted a note from a district manager of Abercrombie and Fitch-owned Ruehl that touched on seemingly similarly strict hiring and employee regulations, or, in the managers' words:


The Standard of the people we hire is THE most important part of the job. We must always audit our schedule to assure we have the best looking & best styled associates working at all times. There is NO reason we accept excuses for who we are hiring.

Clearly, to both companies, their employees' appearance is a crucial aspect of their brand. And, just as clearly, this has to do with the bottom line of multinational corporations, which don't operate with the same ethics many would hope they could expect. In that way, Mary Elizabeth Williams' critique makes sense. In her own words, "the fact remains that for certain jobs, attractiveness is part of the job description." Realistically, yes, of course it is. But does that mean any critique of this business practice is invalid? Just because it's a standard among many a multinational corporation, a standard that's not likely to go away any time soon, we should just suck it up and accept the fact that that's just the way the world works? In different ways, both retail outfits appeal to and strive for the business of All-American upper-middle-class and, certainly, white young people. They want to hire people that fit that mold. No one too fat, no one too brown, no one too ugly, no one too non-gender-conforming. To Williams, this isn't a problem; the mold of what an ideal employee looks like is not problematic because it fits in with their brand image. Yet, if their brand image specifically weeds out applicants based on their race, size, ability, gender identity and appearance, even if this isn't said in so many words, that goes beyond being simply a "brand image" and towards, well, discrimination. Indeed, there are a number of documented cases, dating before the recent Gawker stories, that expose lookist practices that are about a whole lot more than just, well, lookism:

By Williams' terms, then, it seems that discrimination is A-OK as long as the discrimination comes at the hand of a multinational corporation. Williams snarks, "Wait—you want people who look good in your clothes to sell them? Oh, the injustice! All the plain people will have to work at Radio Shack!" Well, sure, Mary Elizabeth Williams, but in a culture where "beautiful" is considered thin, white, Christian, able-bodied and cisgendered, there is something unjust about lookist hiring and employee policies.

Unfortunately, I work for a company that has a strict appearance policy. I work for David's Bridal, and we are required to wear makeup and have our hair styled appropriately, our nails manicured and if we are wearing open-toed shoes, a pedicure. To say the least, it's annoying. But that's it. We have people of all ethnicities, shapes and sizes working at my store (interestingly enough, at the last store I worked at, everyone who worked there was white).

I think having a strict dress code is fine, but you just can't infringe on someone's religious rights, and you can't do what A&F did to the woman with the prosthetic arm. If customers don't like it, that's their own discriminatory problem. Oh and to find out AA makes its employees wear the clothing is barf. When I worked at Nordstrom, in the Brass Plum department (aka teen girls), there were a few times where we were required to wear some shirt the company picked out and of course, being overweight, they never fit me right. And, we could wear jeans, but only jeans that were currently being sold there. Of course I was never told this, and was sent home to change because I was wearing jeans that weren't currently being sold there (but the brand was, which just didn't make sense to me).

The crux of Williams' argument seems to be, "Let them eat cake!" It's easy to dismiss the blatant discriminatory practices as "lookism" if you at least have the "raw materials" = being white, able bodied, slim enough to wear the biggest size and you have drank the kool-aid, which tells you as long as you have the "raw materials" you can glue, powder, diet and spray tan your way into the ideal beauty standard.

I've worked in retail and for much of that time I've been extremely chubby. There are some stores that have blatantly discriminated against me both as a consumer and as an applicant.

The potential employer never got a chance to see me sell the shit out of their merch (I can sell sand on the beach. Super Size it!) because they were far too concerned that I didn't <em>look</em> like a person who matched their own idea of someone who could benefit their company's bottom line.

In the case of these companies, it seems like we are fighting an uphill battle because for the most part, folks who complain about their marketing or hiring practices are dismissed as "haters".

I can wear the top size at BOTH retailers and I would never consider shopping at either place. I guess if I'm dying to look like an off duty dance instructor (which is often the case) I'll go to the Danskin outlet and get my leotard and shiny tights on!
"In real life as in Grand Opera, Arias only make hopeless situations worse." - Kurt Vonnegut Jr.

Great post! Thanks for compiling all of these instances of lookism.

I have to say that I actually am very surprised that American Apparel is noted for doing this. One of the things I always liked about the specific store locations I have gone too (somewhat often I hate to admit) is the diversity in the employees. If anything, I thought they were purposefully hiring people with different looks - many people of color, different shapes, some gender ambiguous, many not straight, and most with unique not "stereotypically pretty" features. The locations I refer to are in an urban area, and so urban dwellers are the demographic they target. They seem to hire a sampling of people that would represent the eclectic mix of the people nearby who would shop there. I wonder if maybe some stores just don't implement certain rules after hiring? Where if sales remain high, district managers will leave individual stores alone? I have seen many things on the no-no list in the internal documents on the link - visible tattoos, piercings, converse, flip flops, and looks that are "off-brand" of their old stuff.

Such a bummer. While the majority of their clothes are insane ("off duty dance instructor" as another commenter wrote puts it well), they have some classic staples and some items I cannot find anywhere else to fit my odd proportions. Maybe it's finally time for me to learn to do more complex things with my sewing machine and make custom fit clothing...