Love and Afrofeminism: Is the Self-Care Movement Individualist or Revolutionary? | Bitch Media

Love and Afrofeminism: Is the Self-Care Movement Individualist or Revolutionary?

My first two posts focused on Love for Others (i.e., relationships), so this week, I wanted to focus on Love for Self. Here we go… [Trigger warning for discussion of suicide] Hi, My name is Spectra, and I'm a recovering first daughter of an African family. Many of you may not know what this means, but if there are any Africans (or better yet, Nigerians) reading this: You are not alone. For the rest of you, let me explain. My first name, Adaora, in Igbo (a Nigerian language) means “Daughter of the People.” The root, “Ada” (pronounced, “Ah-Dah”) always refers to the first daughter of the family. So, when one meets other Adas (Adaobi, Adaeze, Adaaku, etc.), you instantly know they, too, are the first daughters in their families, and therefore share your plight. Being the first daughter of an African family comes with many rewards: constant praise just for being the first girl, early leadership training due to your parents believing (for the mere fact that you were born first) that you can handle anything, doting Aunties, Grandmothers, and community members the instant they hear your name, and first dibs at every aspect of family life, including the stew pot, Christmas presents, and parenting mistakes. Now that you know this, you're ready for the good part. My name is particularly interesting; the second root word, “Ora” (pronounced “Ore-Rah”), translates to “community.” Thus, Adaora (my full name, pronounced Ah-dore-rah) suggests a permanent relationship between the daughter of a Nigerian family and her community. Adaora is the pride and joy of her people, the girl who will always lead by good example. Adaora is the child that will shoulder the responsibility of her siblings' welfare (because she is the oldest) and her community's livelihood (because she is a leader). Adaora's roles, responsibilities, and indeed, obligations to her family (to run the house), her community (to lead it and make it proud), and to herself (to be perfect, and never think of self), were decided for her at birth. Most Adas will wear this ribbon proudly, never questioning their parents' casual, yet persistent dictations of their careers, paths, and romantic lives. The mother of an Ada looks forward to the day when her daughter will finally marry, make her the proudest mother in the city/village/planet, bear children (an Ada of her own), and never once question if any of this is what Ada wants. Sound familiar? You don't have to be Nigerian to recognize the challenge of traditional gender roles—and women being pigeon-holed into caregiving. Some of us have these roles upheld through political systems or religious faiths. However, in my case, the gendered role (of caring for everyone else and sacrificing my needs, constantly, for the betterment of my family and community) happens to be dictated by my culture. Still, my Nigerian/African heritage is a very central part of my identity; our family values, community-centric approach to everything, and the strong sense of duty that comes with both of those things have guided me for as long as I can remember. Thus, even with the heightened awareness that perhaps an unusual amount of self-sacrifice came with my name, I was reluctant to deviate from this for a very long time. 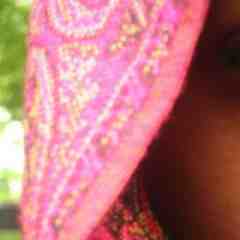 Thank you for writing this. I hope that you are able to give yourself the self-love and self-care that you need.

As a white American, I know that I cannot fully understand your experiences, nor have I shouldered the same burdens.

Still, as the oldest daughter in a family hurt by alcoholism, drug-addiction, and abuse, I have been thinking a lot about self-care lately. I tried to take responsibility for my parents and sister, and I wonder how much of this was a role I adopted vs. a role that was culturally sanctioned. Growing up in a religious environment, I sometimes applied bible teachings to my own situation, and despaired because I didn't want to "turn the other cheek" and didn't feel I had enough love to endure abuse and keep on giving.

I left my family to go to college and grad school, and I sometimes feel guilty for this. I felt guilty having more expendable money than my parents -- and for the most part, not sharing it so I could afford books, a decent apartment, and pay off my loans. But I tell myself that I had always wished my mother would have been less of a martyr, and more energized and able to care for us. I tell myself that if I take care of myself, I will not only be a healthier individual, but I will ultimately have more to offer my sister, my parents, and my community.

Self-care is literally a big challenge for me though. As a kid I could take care of my family. As an adult, I feel accomplished when I sleep, brush my teeth, wash my face, and eat 2-3 meals a day for a whole week. Has anyone else experienced this?

I help to facilitate a program for people who have attempted suicide, and self-care is one of the most important and challenging aspects of it. Many people who have attempted suicide have given everything to others and have nothing left for themselves. We say, "Give from your surplus, not from your core." This means that taking care of yourself comes first, and when caring for others is a priority, your #1 priority is still to keep yourself strong and healthy so that you can care for others the best you can.

As a person of color and an immigrant to the U.S., I really appreciate highlighting the tension and (sometimes) contradiction between self-love (care) and the caring responsibilities to one's family and community. It's an issue that many queers and feminists that I have encountered do not often get when I explain to them. That said, taking care of oneself is very important for those of us involved in various aspects of community organizing, comunity-building, community work. Thanks for writing this article.