Love in the Margins: Talking About Feminist Issues in Mainstream Romance Novels For the week around Valentine’s Day, writer Jessica Luther is writing a series of three articles about gender, race, and sexuality in romance novels. This is the first article in the series.

Romance novels are incredibly popular. Millions of people—mainly women—read them each year, generating billions of dollars in sales annually. Romance novels are the largest share of the fiction market. And the vast majority of these novels feature white, heterosexual, typically thin, not poor, educated, able-bodied protagonists.

But there is an exciting thing happening in romance these days: if you know where to look, you can find are a wide variety of novels that feature people of color, queer relationships, fat characters, and/or protagonists with blue-collar jobs. To go along with it, there are now blogs and sites dedicated to drawing attention to these more marginalized aspects of the romance genre.

One of the best blogs out there interested in “how the romance genre tells (and avoids telling) the stories of those whose lives don’t fit into the neat and tidy box labeled “glamorous” is Love In The Margins.

There are four people who blog at the site:

● Ridley is a funemployed wheelchair user in the Boston area who blogs about romance when she’s not watching hockey.

● Meoskop has been reading and reviewing romance for several decades. She hopes to never be any kind of famous, so her screen name is always subject to change.

●  Rameau is the European who has read romance ever since she stole her first Harlequin from her mother’s stash. Now she reads in two—in a pinch in three—languages and flits from one genre to another.

I talked with the Love in the Margins crew about diversity in the romance genre and their favorite reads.

JESSICA LUTHER: Why did you all start Love In The Margins last year?

Ridley: I wanted to get a group blog together with other people who are marginalized in some way and have the uncomfortable conversations about romance that we need to have.

Rameau: I asked [Ridley], “Why don’t you set up a blog yourself?” The next thing I knew I was part of an email chain trying to decide the domain name.

Beks: As an author of multicultural queer titles I found it very difficult to get my stories reviewed. Not that a title is owed a review, but I would find review site after review site that made it very clear that titles featuring queer characters/non-white characters would not be reviewed. This irked me, for obvious reasons, but it also bothered me that quality work by many other authors was being ignored just because their characters weren’t white or straight. A handful of us (everyone in this round table plus a few more) were talking about this on a particularly bad day in romance land and it seemed like it was time to do something about it, to offer a different perspective.

Meoskop: I’d been blogging and participating in other’s blogs without having a personal stake in what I was advocating. The blogs I visited all talked about the same type of books and the blogs that talked about different books failed to click. @MerrianOW made an offhand comment on Twitter about reading to reinforce our privileges. I realized the conversations I wanted to have couldn’t happen in the places I was trying to have them.

There is so much that mainstream or “default” romance does not normally cover. It’s too much to cover in a single article, it’s such an issue in the genre. But if you had to draw attention to a single issue that you wished romance readers would look at more critically in the genre, what would it be? Heteronormativity? Whiteness? Class? How poorly it handles disability?

Meoskop: It’s a toss-up for me between whiteness and class. I think in many ways they are tied together. I hesitate to define white romance as mainstream romance, but it certainly dominates the conversation in many quarters. Whiteness is something we white people collectively find very difficult to discuss. Authors of color struggle to find a foothold in our shopping baskets for reasons we often refuse to consider, but which kind of come down to what we perceive as a happy ending. Sometimes it gets a bit eugenics up in there.

Ridley: A common refrain you’ll hear in defense of the romance genre is that it’s “by women, for women” and I’m not a big fan of it because, well, which women? I don’t know of many disabled authors, for starters, and the genre does a terrible job portraying disability, especially when the heroine is the disabled character. I don’t feel like romance has my back as a disabled woman. Foz Meadows had a great post called “Your Default Narrative Settings Are Not Apolitical” that easily applies to romance. A lot of what we assume to be universally true is tied up in stereotypes.

Rameau: I really don’t understand why “by women, for women” shouldn’t cover all women of all races, sexualities, and levels of ability. I’m trying to wrap my head around how to bring trans women into this, but that’s a question I wouldn’t have even thought about a year ago. One thing no one has mentioned is the Happily together Ever After rule. What about when the characters haven’t earned their Happily Ever After? Slapdash “I love you”s are more likely to enrage me than comfort me. I’d rather have the victim of domestic abuse walk away than swallow a fairy tale of a redeemed abuser. A romance can end badly, too.

Beks: I would have to say everything, as well. I love Happily Ever Afters. I hate the idea that they belong exclusively to a certain type of white straight people. We are just now starting to see fat heroines pop up more often. In the real world all kinds of people find fulfilling relationships and I don’t see why those relationships can’t be reflected and celebrated on the page. I dream of the day where a book with a trans Afro-Desi woman who walks with the aid of braces falls in love with a genderqueer Lakota bank teller and they participate in BDSM on a budget is reviewed and purchased just a widely as the new Nora Roberts.

With new ways to publish and access literature, do you see alternatives to “default” romance growing? What do you predict for, say, the next five years in romance publishing for “non-default” romance?

Beks: Multicultural casts seem to be catching fire with the television crowd and I wouldn’t be surprised in more films followed. I think multicultural heterosexual romance is on the come up.

Rameau: Bad habits are hard to break. Marginalized romance will grow but it will take time and effort from everyone—the authors and the readers as well as the industry. I don’t know enough about the business to speculate in detail, but I want to believe that social media and interactions with different people, different kind of readers and authors, will help to spread the word and awareness. All you need is an open mind and persistence. It’s worked pretty well for me.

Ridley: I honestly don’t know. Editors seem to be proactively looking for more diverse romance in the male/female market, especially at digital-first imprints, but you also have a ton of authors successfully self-publishing. There’s a good amount of African-American/interracial/multicultural romance out there now, you just need to visit places like Romance Novels In Color or the Fans of Interracial Romance group on Goodreads to find it. I’m not holding much hope for better representations of disability until some disabled authors write it.

Meoskop: I think it’s anyone’s game in a way it hasn’t been previously, but discoverability is still critical. Market forces reach way beyond what an individual author (or blogger) can control. I can see things staying exactly the same just as easily as I can see them completely changing. All it takes is one breakout book to change the game. My concern is that we end up in these tiny pockets of preference and fail to explore beyond our core five or six authors.

What are your top “non-default” romances?

Rameau: I just read Suleikha Snyder’s Bollywood and the Beast and I loved her use of language as well as the story. Phyllis Bourne’s Taste for Temptation had a hero who made me drool in more ways than one. And Tali Spencer’s Thick as Thieves combines a male-male romance with fantasy and humor in a way that works for me.

Meoskop: I wish I could reread Billie Green’s To See The Daisies… First, first published in 1984. I recall Green doing interesting things with mental illness and such, but I don’t know if she’d hold up. Of course Simple Jess - who didn’t love that book? I’m currently attracted to Farrah Rochon and Jeannie Lin—I think they may deliver the wow moment at some point for me.

Beks: All of Beverly Jenkins’s historical romances. Split by Mel Bossa, a gay romance that follows the main character’s love of a family friend from elementary school into adulthood. That book tore me apart. Sword of the Guardian by Merry Shannon, a lesbian fantasy romance that features a cross-dressing acrobat. It’s pretty amazing.

Ridley: The male/female Simple Jess by Pamela Morsi features an intellectually disabled hero in an early 20th century Ozarks farming community and got disability right, I think. The Sublime and Spirited Voyage of Original Sin by Colette Moody was an incredibly fun female/female pirate romance set in the Caribbean in the 18th century. I also really liked Delaney Diamond’s The Wrong Man which had a Black businesswoman heroine with a Cuban construction worker hero. 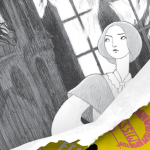 by Sarah Seltzer
The themes and tropes Jane Eyre combined so brilliantly—patriarchy and male control, female dopplegangers, and, of course, gothic houses—remain ever-present in literature and popular culture.