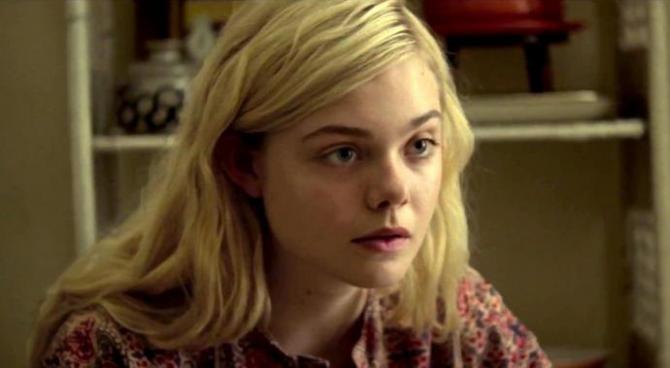 Elle Fanning stars as the bright Amy-Jo Albany, a teenager who is constantly disappointed by adults.

There are plenty of films about how the 1970s in America were a screwed-up time of bad drug trips, smoke-filled rooms, and questionable parenting. But Low Down differs from the rest of the genre in framing its story of the hazy decade from the perspective of a curious young girl.

The film opens on wide-eyed Elle Fanning as 13-year-old Amy-Jo Albany, the real-life daughter of a marginally employed jazz musician who wrote the script for the film based on her memoir Low Down: Jazz, Junk, and Other Fairytales from Childhood. In the first scene, Amy looks out the window of the fleabag hotel she and her dad call home and gasps in horror as she sees her dad suddenly surrounded by police officers and arrested. “I often thought my father was born of music,” she says in a voiceover, “some wayward melody that took the form of a man.”

Low Down ripples with the backbone of piano jazz, detailing the trials and travails of Amy’s dad in dark, sultry light. While he’s got charm and musical talent, ol’ Joe Albany (played by John Hawkes) just can’t quit shooting up heroin, carousing rockily through life while the stable women around him—Amy and her indefatigable grandmother—offer reasonable worries like, “What about your probation?” But the least interesting parts of the film are about him. Unlike the litany of movies about talented-but-troubled male musicians who just can’t catch a break, it’s Amy who’s the center of the story here. It’s refreshing to see a film focus on how a classic antihero’s drug habits and irresponsible lifestyle create emotional and financial havoc for his family.

Fanning’s portrayal of a quiet, curious, vulnerable teenage Amy is spot-on. She doesn’t say much, but Amy takes everything in: she nods her head along to her dad’s jam sessions, notes the whiskey bottles in her mom’s purse, and silently keeps tabs on the comings-and-goings of their hotel neighbors. The fearon her face is clear when her dad’s sketchy friends turn up at their hotel room and her eyes quiver with heartbreak when her relapses once again. Amy’s no angsty teen stereotype, though. In a few wonderful scenes, she bursts out with joy, racing up the staircase with her gangly limbs or breaking out in laughter while watching Night of the Living Dead on the sofa with her dad. She’s got a lovely, weird dark humor, too: on Valentine’s Day, she writes a card for her father, “Today is named for a saint who got his head chopped off for performing weddings. Ouch!”

Glenn Close is equally compelling as the resilient Gram. The long-suffering matriarch is a role that could have been reduced to a nagging trope, but this grandma is one who welcomes her granddaughter with open arms, lending her Dylan Thomas books, cooking her noodles and gravy, and quoting Charlie Chaplin. Together, the pair weather the stormy seas of Joe Albany’s addiction and frequent incarceration, but refuse to let his problems subsume their own lives. They’re both honest, creative, warm-hearted women who are frequently disappointed to find that most adults are just stumbling trough their lives, always copping a plea and just trying to land a good hustle.

The first half of the film flows along very nicely through the mundane challenges and triumphs of complicated family life. Taryn Manning and Peter Dinklage both put in good performances as Amy’s hotel room neighbors, part of the gross circus of addicts and impoverished artists who form the chain-smoking landscape of her life.  Sadly, Low Down loses this realistic thread toward the end of the film and veers regrettably into melodrama. Most of the film keeps the dialogue short and tight. But toward the final scenes, characters morph into expository monsters. In one especially unfortunate scene, Amy’s mom drunkenly harps on her every hidden fear as she sneers from a barstool—it’s an unnecessary and ugly scene that tanks the realism of the better parts of the film. Then, after unfolding slowly for nearly two hours, the movie ends suddenly, wrapping up with a voiceover and tacked-on epilogue.

It’s disappointing that Low Down unspools toward the end, since the first half is filled with great characters and a smart script. Like Amy’s character herself, the film is astute in some ways and overwhelmingly awkward in others.

Sarah Mirk is Bitch Media’s online editor. She loves most films about the seedy sides of LA.