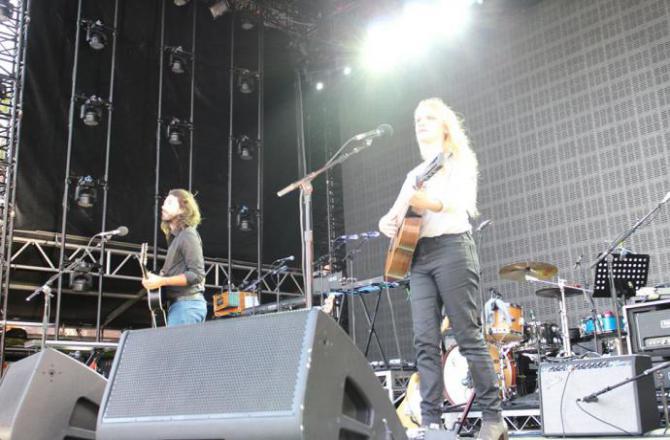 On one of the hottest days of the summer, I plugged in my headphones and turned on Luluc’s new album Passerby. It was 90 degrees in my office and the air was stagnant, but as the first song kiceds in, I felt like I was drinking rosé on a porch swing, a cool breeze wafting through the foliage over my head.

Unlike a lot of other indie albums coming out this summer, Passerby is not washed-out, reverb-overloaded tunes. Instead, Passerby is calm and mellow, an album I’ll certainly return to when I need a retreat.

It has been six long years since Australians duo Luluc (pronounced Loo-LUKE) came out with their first album, Dear Hamlyn, but Zoë Randell and Steve Hassett show that taking things a little slow can be a good thing, reaping wonderful results. The new album, released last week on SupPop, was co-produced by The National’s Aaron Dessner and Nick Drake’s former producer, Joe Boyd. Though the album’s powerhouse production team might draw some listeners, the band’s hushed, minimalist music recalls the style of their producers while remaining unique.

The opening track, “Small Window” is gauzy and austere with just enough reverb to lull the listener into a trance. The composition of this track is straightforward and the production does not distract from the Randall asking “What of you from my small window?” as she paints a vivid picture of someone flying in a plane over Chicago contemplating distance and separation. This track is pretty representative of the themes discussed on Passerby: love, time, patience, and place are tinged with melancholy and the regret that comes with aging. Randall and Hassett are gifted at constructing rich landscapes which their listeners can be a part of. The closer, “Star” is a beautiful mix of richly layered strings that swell as Randall narrates her limitations and doubts. This decrescendos beautifully into a simple guitar strumming and Randall realizing that she “can see so much, much more than before,” bringing some finality and closure to the end of the album, which tends to be pretty heavy on melancholy and lack of resolution.

Luluc gets more experimental with their sound on a couple of tracks while continuing to be subtle and uniquely themselves.  The middle of the album is marked by intertwining guitar picking, soft vocals by Randall, and intriguing lyrics, which has caused some critics to draw comparisons to Nick Drake. While I agree with this comparison to some extent, especially considering Boyd’s role in production, Passerby avoids being as monotonous as Nick Drake’s music. Instead, this album explores how multi-textured softness can be. The six-minute “Tangled Heart” marks the middle of the album and serves as the apex that showcases Luluc’s stylistic breadth. This song feels substantial and carries more sonic weight than the other tracks, with soft horns and syncopated drums reaching for higher volume and consistent rhythm towards the end.  “Tangled Heart” is bracing and louder than their other tracks, but it maintains Luluc’s knack for simple lyrics. Luluc is definitely not a one-trick pony of a band and they are not afraid to dip their toes into new territory. “Early Night” starts with measured snares snapping and ambient guitar, and humming bass. Randall sings, “Sometimes I don’t see what’s right in front of me, yet I keep moving faster trying to find the key… you elude me.” Luluc isn’t a band that likes to waste words as they get at the heart of loss, nor do they compromise their style when trying out new sounds in their songwriting.

I will admit that you may need to listen to Passerby a few times through to feel its heft, however you’ll be glad you did. After six years, Luluc has made an album that explores time and patience. Passeryby is an introspective musical effort that is multifaceted and downright pretty to listen to—if you can spare the time to listen to the details. When it’s this hot out, who doesn’t mind a little time to kick back and let the little details wash over you like a breeze?

Miriam W. Karraker is Bitch’s current development and outreach intern, a student at Lewis & Clark College, a poet, and a non-fiction writer.

by Katie Presley
A mix of some of the best music we saw at SXSW music festival in Austin this year.