As you may recall from previous seasons of Bitch’s Mad Men coverage, instead of a linear recap of just what happened on last night’s episode we (Andi, Annalee, and Kelsey) each pick a theme or two and dig a little deeper into the world of SC&P. Andi was on a plane during last night’s episode “Time Zones”—hopefully snuggling with Neve Campbell!—but she’ll be back next week with her thoughts, and maybe a new bottle of sleeping pills to pass around.

Now hop in this sexy convertible (passenger side please) and let’s get to it! 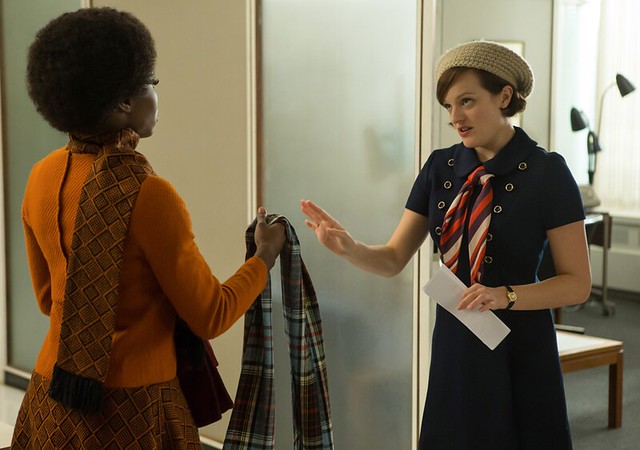 Shirley no—you don’t need a scarf. Your look is PERFECTION as is.

The first third or so of “Time Zones” felt like the dawning of a new era. Freddie Rumsen practically busted down the fourth wall to tell us this was “the beginning of something,” and every shot offered a new character (Shirley! You are a vision!) or a familiar one in a new setting (Roger! WHAT IS HAPPENING?). Lou—a bizarro Mr. Rogers if there ever was one—has stepped in for Don. Megan has a new life in a new city in a new house, and she’s not the only one: Pete Campbell has gone full Californian. 1969 is a whole new world!

Except really, it isn’t. Take Joan, for example. She’s handling accounts like a boss and putting weaselly Coke-drinking MBAs in their place, but when it comes time to actually discuss the Butler Footwear business every man she interacts with, from Ken to that marketing professor, treats her like an amateur secretary. It was no mistake that our first look at Joan this episode was a lecherous pan from the ground up while she walked up the stairs; she may be all business, but those around her still think of her sex appeal first and her professional assets second (if at all). And Peggy isn’t faring much better. After all the hard work she’s put in and the great ideas she’s brought to SC&P, Lou (who I know we don’t really know but who I already hate with the fire of the Los Angeles sun) dismisses her like a little girl—the same way Don did eight years ago.

And speaking of Don! He started things out this episode looking fresh to death in the shotgun seat(!) of a convertible next to his bangin’ wife, but as soon as they got back to Megan’s place it was clear things haven’t improved much for these two, despite their status as Megan’s hilarious agent’s “favorite couple.” In a role reversal of sorts, Megan drank too much and had to be carried to bed—Willa Paskin even suggests Megan’s bender may have been a strategy to avoid intimacy—and the next night their conversation and their subsequent make out sesh were filled with tension and painful silences. This caused Don to go into full Unhappily Married Draper mode, seeking comfort (emotional this time) from a foxy brunette who is not his wife. Hello Neve Campbell! Goodbye New Don! What did you make of their exchange, anyway? To me it felt like like a microcosm of the episode itself—it started out sparkling and sexy, but once the sun went down everyone was sad and tired and full of regrets. Sigh. We can’t all spread our husband’s ashes at Pebble Beach; sometimes we have to settle for Tom Sawyer’s Island.

If you need further proof that our Mad Men and Women are reverting back to their old selves, look no further than Roger Sterling. He’s shaken things up more than anyone else, going from a somewhat stable married life to a swinging den iniquity, free love, and Schlitz; but when he comes home from brunch with Margaret he just wants to hang up his three-piece suit and go to bed. You can give an old dog LSD and a midlife crisis, but you can’t make him like the new tricks.

Oh, and don’t let that sweater on Pete Campbell fool you. He’s still sleazing all over any women unlucky enough to cross his path—run while you can Bonnie Whiteside!—and doing whatever he can to impress Don. That said, I laughed out loud when I saw him in his California getup. Glad to know you “love the vibrations,” Peter.

Freddie Rumsen! Did you recognize that Accutron pitch as pure Draper, or were you surprised to learn Don is the Cyrano to Freddie’s Christian?

OK, I know we’re supposed to let that whole Megan-is-Sharon-Tate conspiracy go, but as Tom and Lorenzo pointed out in their recap, Megan is practically quoting lines from Helter Skelter! Is Matthew Weiner trolling us?

Did you hear that “Bob Benson was on the line” for Ken? Looks like we’re in for some more short shorts this season! I’m looking forward to seeing him, along with Sally and Betty, who were also conspicuously absent this week. 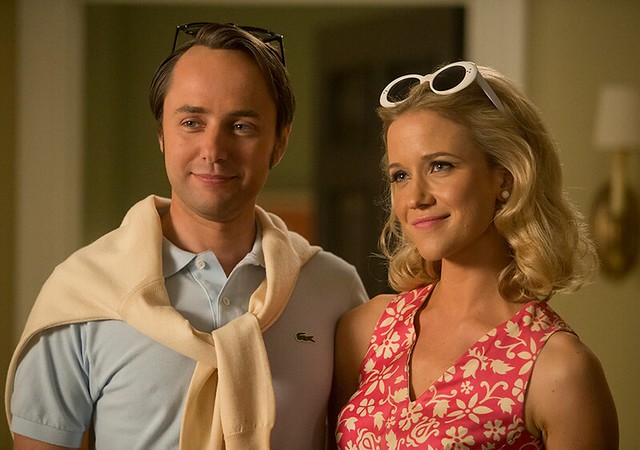 “Blame Madison Avenue for that”

For a season opener, Mad Men’s “Time Zones” was such a bummer! Where we can normally get excited tracking what’s changed between seasons (offices have been reassigned, hemlines are generally shorter), it was hard last night to find much to take delight in (let alone “lasting delight”). Much like Don’s usual luck with airplane neighbors, most of our Mad friends seem destined to have their expectations romanticized and then crushed.

Blame it on the January NYC weather (and possibly seasonal affective disorder), but the offices of SC&P are thick with malaise. Ken is the new Pete, complete with corner office and temper tantrums. Peggy is, well, the new Peggy—like Kelsey said, it’s as if her ascension to power in Season 6 had never happened (way to tease us with that closing shot of her, all full of pants suit glory, in Don’s office last season, Weiner & Co.!). And let’s not start on how the bros are treating Joanie.

Where Ken, once the very image of work/life balance, is swimming in too much responsibility (and too little depth perception), Joan and Pegs would love to have more on their plates. Our ladies’ continued aspirations for workplace success only make the sting of underestimation hurt all the more. Joan’s weathering of condescension from a client, a professor, and Ken all in one episode, plus Peggy’s tearful collapse at home by herself after a trying day at work could basically serve as a Newsweek “Can Women REALLY Have It All?” cover. I hope that this is merely setting the stage for an amazing comeback, because I’m feeling my own fantasies of Peggy’s and Joan’s fortunes destroyed before my very eyes.

Amongst these Debbie Downers, the shining beacon of hope, the vision of adaptation and change, all come in the form of one Mr. Pete Campbell (Suicide Watch who?). Even though he is literally living in the pits, Pete is upbeat to the point of hilarity. He’s tan enough for both he and Ted, and seems to be having a blast! It’s as if Trudy’s reassurance of his freedom at the end of last season actually meant something to him. Possibly having his life completely fall apart, leaving him without hopes or dreams, has made Pete the least disappointed one in the bunch. Unlike Don, who continues to dwell over who and what he can be, Pete went to California free of expectations for himself. For as much as Neve Campbell insists that unrealistic advertisements are the root of unhappiness, California is proving to be nothing but sunshine and blond women for SC&P’s former bitchface.

Glad to see that Stan’s beard is still here, though given that only two months have passed in Mad Men time, I guess my fears of its disappearance were a bit much.

Maybe part of the reason why this week’s episode was such a sadfest was because of the absence of two of the most quickly developing characters, Sally and Bob Benson. There’s so much more to figure out about these two, I almost wish Weiner wouldn’t waste time reiterating to me that yes, once again, Don is having issues this season (though, given that this is the beginning of the end of Mad Men, I’LL TAKE WHAT I CAN GET!).

Inappropriate office behavior: We hate to say it because Lou is such an asshole, but it might be Peggy this week. She should try a different angle with the Accutron thing, right?

Related Reading: An Ode to My Four Favorite Women on Mad Men.

Pete's outfit was most def one of the most talked about things from this week, but I feel like I'm interpreting it totally different than everyone else. Everyone sees it as this emblem of him going full California and "vibrations," but I see Pete dressing like the East Coast WASP that he is, and wearing preppy leisure wear (as opposed to suits) since that's more okay in Cali. But his entire look screams East Coast Establishment to me, only what they wear on their off time, as opposed to normal 3 piece suit business attire.

I've been almost as excited about your recaps coming back as I have been about Mad Men itself!

My one point of divergence with what you've got here is the way I viewed the scene between Joan and the professor. I think they both brought some bias to the table, and I think they were both delighted to discover that they were wrong. She thought he was a lecherous old perf wanting to trade info for sex, and he thought she was a secretarial type with limited knowledge of (or access to) the agency's inner workings. I'm hoping we get to see this relationship progress, and maybe see this fellow become a mentor for Joan in some way.

Regarding Freddy playing Cyrano with Don, I totally knew. I didn't know how, but I knew those were Draper words coming out of his mouth. And you could see Peggy grabbing at them like they were the first oxygen she'd had access to in 2 months. And then Lou crapped on her, and she cried. I wish she and Don had known they both needed hugs right then.

Am I the only one who felt like the episode was full of weird doppelgängers?
- Bonnie Whiteside, A.K.A. Jessy Schram, Brittany Snow doppelgänger
- Lou Avery, A.K.A. Allan Havey, doppelgänger for the evil mayor from Buffy
- Peggy, <a href="http://hookedonhouses.net/wp-content/uploads/2009/06/mary-tyler-moore-op...änger for sassy Mary Tyler Moore?</a>

Good call on the doppelgängers! Although I thought Bonnie Whiteside was Anna Camp at first, which confused me because she already had a small role in season four.

I definitely see your point about Joan and the professor; it was nice to see each of them be pleasantly surprised by the other. It would be great for that relationship to develop because—especially with Don out of the SC&P picture—Joan deserves some mentors in her life who don't want to have sex with her (looking at you Roger). That said, those are the exact sort of real-life-esque interactions Mad Men gives us a glimpse of before moving on forever.

I know it's unlikely but I want Peggy to throw her beret in the air in triumph during the series finale. She's gonna make it after all!