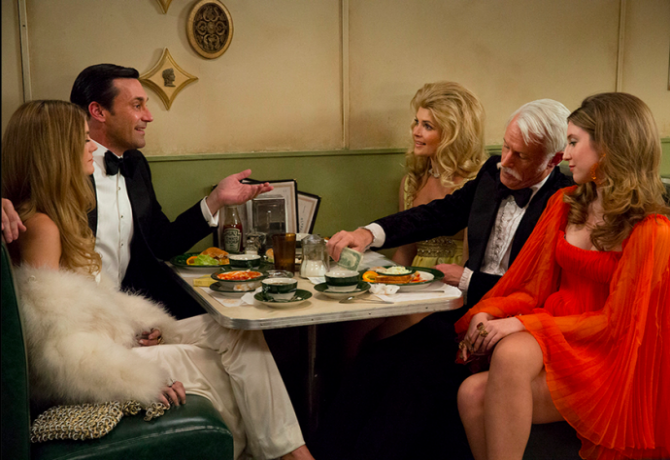 Mad Men fans Kelsey Wallace and Annalee Schafranek each have their own perspective on this week’s show. Catch up on their past Mad Men articles here.

The gang is back and the changes in facial hair are as surprising as ever!

The first episode in the last half of Mad Men’s final season (appropriately titled “Severance”) had our pals reminiscing on what might have been. Ken’s mourns his abandoned writing career (Pete’s right—how great would Dave Algonquin look on the back of a book jacket?!), Peggy’s reminded of her lack of a partner in life, and Don’s haunted by his ghosts of girlfriends past. Like Peggy Lee asks us in the opening and closing of the episode, “Is that all there is?”

Like many a 9-to-5-er, Ken suddenly feels the drain of working in an unfulfilling career, especially when his wife Alex Mack points out the similarities between himself and his father-in-law. Remember the days when his piece in Atlantic Monthly seemed like the beginning of great things? Ken’s sure as hell thinking back on happier times, wondering what could have happened if he had lived life like a Pinterest board and never given up on his daydreams. However, rather than take the opportunity of being fired to pursue those life passions, in this episode he opts to screw over Pete and Roger, which could be his greatest wish fulfillment of all (who could blame him?).

Thanks to the ass hats at McCann, our girl Pegs once again worries that she isn’t woman enough for a dating life, with her career successes stacked up as marks AGAINST her. On her blind date with Stevie, we see Peggy come to a crossroads: She can either be annoyed by her date’s passive acceptance when served the wrong dish, and effectively squash any potential for the evening in the process, or she can smile and sweetly offer to trade dishes. Peggy sees the options she’s dismissed or avoided in the past, and chooses instead to seize them in the present. Pragmatic, skeptical Peggy would never agree to fly to Paris with some new beau after a first date. But fun-loving and spontaneous Peggy at least entertains the thought—that is, until she realizes her passport is at the office.

With Laura, Maxine, and Trisha all calling, it appears as if Don loves the single life again. But when a waitress with a familiar face refills his coffee (someone who I believe we are supposed to think looks like Rachel Menken Katz, but struck me more like a Midge doppelganger), Don becomes obsessed with the life he could have had with one of Mad Men’s most beloved Draper mistresses. When Dream Rachel says, “I’m supposed to tell you you missed your flight,” is she really telling Don that he’s running out of opportunities for reinvention? As we sadly learn, any chances of reconnection with Rachel (rest in peace) are gone. Are his chances to change his life gone as well?

Last season’s Don was certainly wondering this, telling Peggy in “The Strategy” that he worries his life means nothing and that he has no one. It’s hard to make genuine connections when you’re trying to outrun your history, and we’ve all known that Dick Whitman’s long con wouldn’t be without its drawbacks. But what will Don do with these realizations in these last remaining episodes? 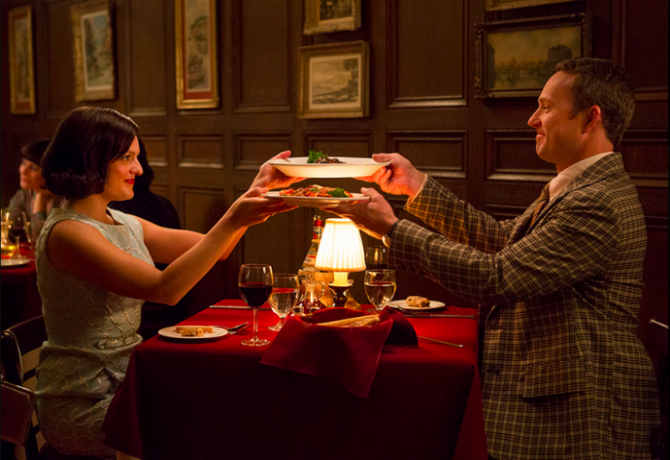 Based on the Nixon speech, less than a year has passed since the moon landing. In such a short time, both Roger and Ted decided those moustaches would be a good look?

Bold prediction for the season:

This is more wishful thinking than informed guesses (because really, who could guess what Weiner & Co. have up their sleeves), but I’m still holding out for us to see Sal one last time! 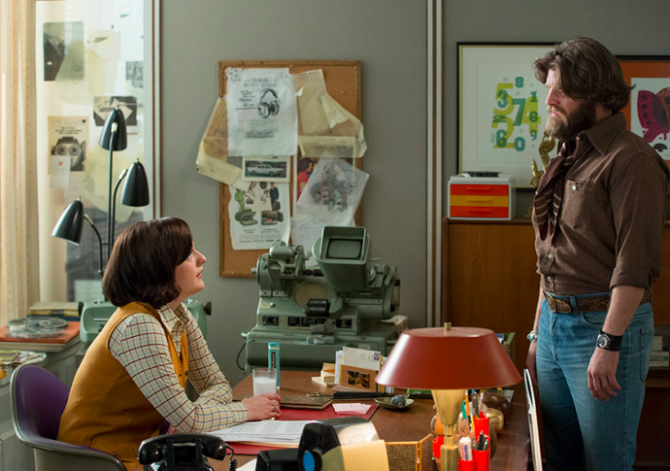 Our Mad Men spent this episode dwelling on what might have been and it’s no surprise since after 11 years and seven seasons, they’re right back where they started. Don Draper is selling furs and schmoozing models; Roger Sterling is cracking wise while juggling two age-inappropriate women; Pete Campbell is privileged and whining about it; Joan Holloway-Harris bites her tongue as men ogle her body, then takes it out mean-girl style on Peggy; Kenny Cosgrove is an adman once more; and Peggy Olson is in the office when she should be elsewhere (like in Paris with Brian Krakow!). In fact, some of the shots in “Severance” were direct callbacks to previous seasons—Don and Roger in the diner booth, a sexy young woman cleaning red wine off the carpet, Don making out with a Rachel Menken-esque woman in an alley—the list goes on. Is Mad Men trying to tell us that nothing ever really changes, or is Matthew Weiner just stuck on the same nostalgia carousel as his characters?

Most likely it’s both. The times may be a changin’ but people rarely do, especially not at Sterling Cooper & Partners. It’s now April of 1970 and the hemlines, facial hair, and ascot ties have been updated accordingly (Hellooo Stan!). On the surface, it looks like a lot has changed since we left off with the moon landing of 1969, but over the course of the episode we see familiar faces make familiar choices. Same shit, different decade.

For most characters, this stasis feels inevitable. Sure, he’s married a couple of women and given up his secret identity, but we never thought Don would really change, did we? Same goes for Roger, whose heart attack, divorce, and fondness for LSD served only to cement the person he was already. We could say the same for Pete: You can take the bitchface out of New York, but he’ll be back eventually. For Joan, Peggy, and Ken though, this return to old habits hits a little harder. As unlikely as it is for people to truly change, to really shake things up and tell off the bosses, go to Paris at a moment’s notice, or move to a farm to write a novel, we want to see these three beat the odds. I’d like to think it might happen before the season ends, but I’m not holding my breath.

Take that elevator scene between Joan and Peggy, for example. It’s been 11 years in the Mad Men universe and these two have been through the wringer together, but after an infuriating meeting with the frat bros of Delta Delta McCann where both women were demeaned and Joan was downright harassed, they turn on each other. Peggy tells Joan she was “asking for it” with the way she dresses, and Joan implies that Peggy is just jealous because she isn’t pretty enough. Sound familiar? As Peggy might say if she ever takes that Paris trip, plus ça change, plus c’est la même chose, especially on Mad Men.

So hop on that carousel folks—the ride ain’t over yet. 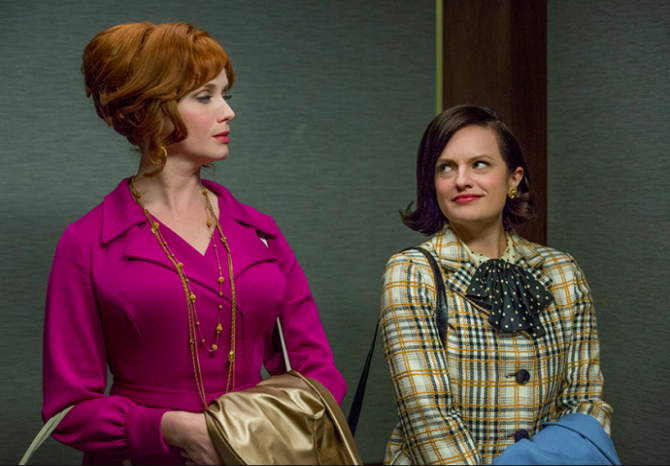 Please embrace feminism and each other now, thanks.

It’s obvious that that McCann Erickson money drove a wedge between the employees who got some (Don, Joan, Roger, Pete) and those who didn’t (Peggy, Ken, Harry). Two characters got called out for their wealth this week and I bet there’s more to come.

I’m with Elisabeth Moss: Mad Men has given us many exciting ‘90s guest stars, but Brian Krakow might just be the best yet!

Bold prediction for the season:

Even though they didn’t appear this week, I’m expecting big things for Betty and especially Sally, one of the few Mad Men characters who seems truly capable of change. Weiner, don’t fail me now!

Related Reading: How Mad Men is a Call to Arms.

I'm so excited that the recap is here already-- the icing on my Mad Men cake!

I really think the new waitress is supposed to evoke either Midge or all of Don's past loves. I kept thinking how much she looks like Rosemarie DeWitt, but it took me forever to remember that Rosemarie DeWitt *IS* Midge. Duh.

Honestly, I think this show can do no wrong. I just love it so. I gotta re-watch the pilot.

Waiting eagerly for the "New Business" recap! Love your writing!