Few people embody the tough questions raised by the advertising industry like George Lois. A brilliant innovator who is responsible for countless iconic (and offensive) ad campaigns and Esquire covers, Lois is both frustrating and inspiring. Which makes him perfect, of course, for this week’s Mad World discussion. 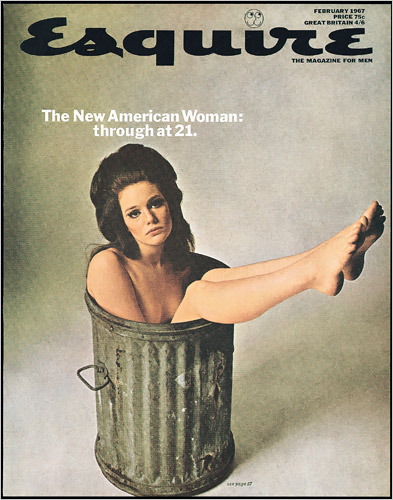 Yep, Lois did this.

A full biography of Lois can be found here, but to sum it up this guy has had a major impact on advertising and popular culture in the US for the past five decades. The “I want my MTV” campaign? His idea. Getting celebrities to appear in advertisements? Yeah, he made that popular. Heck, he even revolutionized oil changes with his Jiffy Lube ads. Pushing the envelope when it comes to advertising (as well as PR, television, fashion, and America’s consumption habits) has been this guy’s bag since before most of us were born. However, with great power comes great responsibility, and Lois hasn’t always used his for the benefit of womankind.

For example, Lois goes back and forth on some of his most recognizable “girlie” Esquire covers, from hey-this-was-fine-back-then-and-women-liked-it-too to this-paved-the-way-for-women’s-rights-so-please-thank-me, in a recent interview with Jezebel’s Irin. The thing is, whether you like his covers or his ad campaigns or the man himself or you don’t, he really has played a role in the evolution of the pop cultural representations of women. Whether he is a friend or a foe is a little murky.

Lois (whose name I first heard in an episode of This American Life, though I’d been seeing his work for years) is tricky for me to pin down because, for all of his seeming pigheadedness, he does seem to put a lot of thought into his work. He’s a crackerjack ad exec, and many of his campaigns contain levels of creativity and humor that are lacking in other advertisements. This is a good thing, and it’s clear that Lois has an uncanny ability to give people what they don’t even know they want (similarly to Mad Men’s Don Draper, the creation of whom Lois inspired). The bad thing is that what people secretly want, apparently, is often to see women reduced to stereotypes.

Did you hear him sounding baffled as to why NOW was upset about his typewriter campaign? He doesn’t understand their concerns because he was trying to sell typewriters, not advance representations of women in the media. It’s frustrating that he doesn’t see that he could do both.

Lois doesn’t seem to get (or care much about) the controversy behind some of his work. He told Irin of the trash can cover,

Lois is out to have a good time (or create the illusion of a good time with his work), and to give other people the chance to get in on it. He doesn’t understand why women would be upset about a trash can when they could be living it up with his wife and her friends at the beauty parlor. This is the same sentiment expressed by those who tell feminists to “lighten up” or tell media literacy scholars to “stop being so critical.” It’s difficult to yuk it up when you’re being marginalized, even if the joke is funny.

Of course, Lois is also a smart cookie, and he has used his smarts to deconstruct beauty myths and challenge gender norms, just as he has used them to the opposite effect. Like Don Draper (though Lois hates the comparison) he is a moral free agent. At least when it comes to feminism and representations of women he appears to be.

I must admit, though, the excitement Lois still has for the ad industry at age 78 is kind of inspiring. I recently saw the film Art & Copy, and the interviews with Lois were my favorite part. Check him out in the trailer (he’s the salty bald guy):

So what exactly do we make of George Lois? Should he be celebrated by feminist media literati (that is what I’m calling us now, btw) because he has raised the creative bar and done some downright iconic work (some of which, to be fair, has raised awareness for women’s issues)? Should he be chastised because of the ways he’s influenced the ad world and helped to shape a cultural landscape where women are expected to fulfill men’s fantasies? Do advertising executives/creatives even have a responsibility to think about social issues in their work? Or should we just be frustrated because Lois doesn’t seem to get what all the fuss is about?

His musings on power are really interesting. "Oh yeah, that's great, yeah sure."
Seeing this enthusiasm for advertising rather than the reliance on sex to sell is refreshing. While Lois certainly used sex to push product and the envelope, the robotic instinct to do this wasn't ingrained in his sense of advertising, it was something 'new' and 'provocative' to explore - more commendable than Axe ads.