The Huffington Post regularly uses women’s bodies as an internet marketing strategy to entice viewers and generate ad revenue. Linkbait (n.): sensationalized and unrelated images and headlines used to draw viewers into other content on a website, it is often used to generate ad revenue

Anita Sarkeesian is a feminist media literacy advocate, pop culture critic and fair use proponent. She maintains an ongoing web series of video commentaries from a fangirl/feminist/anti-oppression perspective at her website www.FeministFrequency.com.

Excellent points, thank you for pointing that out, and so very eloquently.

BRAVO! I am thrilled to finally see the Huff exposed for what it is: a shameless exploiter of women's bodies for the purpose of selling clicks, despite it's female liberal front. I'd love to see this site girl-cotted.

This is fantastic. I have often wondered about this issue. I feel a level of unease while perusing Huffpo, beyond the scary comment sections, though I couldn't articulate as gender specific fuckery until this post.

to all the other comments...I mean, I like, knew that about HuffPo? You know? As almost an after thought? But seeing all those images collected together really drove home the point. Coupled with the FAIR report....yughks (yikes + ugh). Thanks Anita!

Everything you just said is so right on and doesn't get said enough. Keep talking. I am sharing this video with as many people as possible. Any media outlet that discriminates against women is anything but progressive, and its time the charade is exposed. Thank you. I will spread the word as well.

I am so sorry I haven't put it up yet, I will get it up ASAP tomorrow.

So sorry I took so long getting this up, transcript is here: http://www.feministfrequency.com/2010/08/the-huffington-posts-sexist-lin...

This argument is a bit overstated.

What about context? The sex club/ground zero "mosque" article underscored the hypocrisy of the protesters: a sex club in the area not a problem for them. And then, yes, HuffPo took advantage of the sexy image.

I was actually most concerned about the small percentage of content from female writers: this is a problem all over the web and Ariana should work to do more about it.

Finally, I just have to say: if HuffPo were as earnestly feminist as you'd like, it wouldn't be the financial powerhouse it is. The money is important and a site like this is walking a fine line.

Just because you see a potential financial angle to HuffPo's use of sexist images doesn't mean that we should refrain from critiquing them. Same goes for their lack of female contributors. Are you saying that because these things (sexism, offensive content) are prevalent on the Internet that we should just accept them and get over it? No dice.

Also, you're preaching to the wrong choir if you're trying to make a case that a website should forsake feminism for cold, hard cash. (You know, because we're a feminist website.)

You’re mis-stating my position! I’ll say it again: it’s good that bitch and your blogger critique HuffPo but your arguments are somewhat overstated and lack essential context.

HuffPo’s mission is clearly to be a progressive, yet powerful and financially successful online presence. To be so powerful and successful, it needs to make some tradeoffs. That is a choice Huffington has made which has led to great success but also—of course—deserves to be critiqued.

If you want to fairly critique HuffPo, you need to consider the context a little more carefully. For example, the sex club/ground zero "mosque" article was specifically illustrating the irony of the protesters’ position. The offending pic here was of a woman’s foot in a platform shoe—suggestive but not wild.

Also, the dearth of female political bloggers on the web is not purely an issue of sexism, although that is naturally a factor. Fewer women write political stuff online. In fact, there was a big discussion about this last year in progressive blogs.

HuffPo has many faults: it uses sex to lure viewers, it exploits women’s and (to a lesser extent) men’s images, it links to trashy Brit tabloids, it features some lame bloggers, etc. However, it might not look so evil if you give it a fairer, more in-depth analysis.

I'm sorry, but Anita's critique is spot-on AND fair. If you truly believe
- that using isolated parts of a woman's body--even her shoes! her shoes!--is not sexist
-that if an argument is progressive then it's totally okay to use objectification of women to draw attention to it
-and that "there aren't a lot of female political bloggers" somehow justifies a 23% female staff

then you have some more feminism 101 reading to do, friend.

I don't believe you should overstate and/or misrepresent the positions of someone who disagrees with you.

Actually the original WSJ blog article about the strip club near the proposed Islamic community center did not include an image of a woman's body at all. It included only an image of a neon sign. Which means HuffPo actively went out of their way to find a series of stock photos of faceless pole dancers to splash across their home page for the day.

Besides that detail, even the original blog post by Andrew Grossman on WSJ is a stupid and ridiculous article that has little to do with the issue or the racist trumped up "controversy". My guess is that Mr. Grossman just wanted an excuse to do a story at a strip club.

I thought the interviews with the workers at the club made a pretty ironic counterpoint to the rage of the anti-mosquers. However, I agree that the pic was added by HuffPo merely to attract links.

My main point in this thread is that I thought the critique of HuffPo's sexist pics could have had more depth and nuance. I guess I naturally rebel against black/white arguments that lack specific context.

Whatever you think about the WSJ article its certainly does not rise to the level of top article of the day deserving of the entire front page of a news blog.

As for your other comments, as others have already stated clearly above...

A) In the drive to be "successful" sites like the HuffPo loose all creditability as "progressive" or "liberal" when they devolve into sexism. So the trade off for being "powerful" is that they have lost sight of their mission and become a vehicle for more of the same old sexism we see in other media.

B) The image accompanying the HuffPo ground zero post is not "suggestive" it is a classic example using images of faceless, headless and sexualized female body parts for advertising. If you don't think that is a problem try reading some Jean Kilbourne.

C) Your statement that "fewer women write political stuff online" is both wrong and also not the point. First you could expand your definition of that counts as "political" (whicj is a point the video makes). Second if progressive sites actually cared about woman's issues/rights, gender equity and working against sexism than they would find, hire and otherwise seek out female writers. Its not hard to do, they are everywhere.

D) So actually I think Anita's video is a very fair and in-depth analysis of HuffPo's sexism.

ceenik, could you explain in more detail? I'm not quite sure I understand your position.

That, and the fact that every article I've ever read from that website has needed grammar help.

Indeed, enticing readers with these images is not a good thing and can come from any political pursuasion.

While I might be a little too late here, oh well.

I think it's important to address the specific nature of the images. In this case, I find it more problematic that the women who are choosing to exploit their own bodies are not the ones offering any content. It would be drastically different if they were addressing issues themselves. There is something to be said for the seemingly stale argument, that there is no one flavor of feminism. Residing in the camp of conservative sexual interests, for the sake progressing a singular feminist voice, is limiting women to binary exploration of ideas and sexuality. While I agree with the original critique, that in this specific case, there is a blatant disregard for sexism, I don't wholly agree that using your own body is always negative.

Sexism is so prevalent people don't even realise they're being influenced.

Blatantly sexist companies are definitely harmful, but even more destructive are companies that subtly promote sexism, and food companies seem to be the worst.

Ragu got into trouble a couple of years ago when they disrespected men, and the men went on twitter and Facebook enraged and called them out. Chef Boyardee apologised and life went back to normal for Ragu.

When woman are insulted, outrage like that rarely seems to happen anymore.

This company for example, GoldSeal https://www.facebook.com/goldseal happily depicts only women in housekeeping roles like cooking, cleaning, shopping, and raising kids. There isn't a man on the entire site taking care of his family.

Women seem to love the site, and it's been online for years, but no one seems to mind that the company, which is huge, sends a 1960's message of, "A woman's place is in the home, barefoot and pregnant." 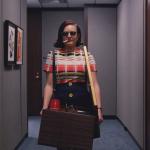 by Andi Zeisler
Excerpt from the new book “We Were Feminists Once: From Riot Grrrl to CoverGirl©, the Buying and Selling of a Political Movement,” by Andi Zeisler.