Mainstream Media is Slowly Learning That Catcalls Are Not Compliments

Students in Pennsylvania chalked their college campus with this spring. Photo by Paul Weaver, via Creative Commons.

Last week, the New York Post published an article last week with the headline “Hey, Ladies—Catcalls are Flattering! Deal With It.” The article, sadly, was not a joke. The piece provoked an immediate flurry of articles voicing the opposite point of view not only on feminist and liberal outlets and blogs, but also in outlets like Time and USA Today. I was surprised to see street harassment get so much attention in mainstream media.

Seven years ago this month, I turned in my master’s thesis on street harassment at George Washington University. Soon afterward, I found myself in the public eye for the first time when a CNN story that mentioned my thesis landed on their homepage. The headline read “Catcalling: Creepy or a Compliment?” I was dismayed they had given equal credence to the belief that the offensive behavior that all of my female friends and family members and I had experienced and hated was complimentary.

The article was followed by commenters that mostly leaned toward the “compliment” side of this debate, as did the authors of some of the blog posts I saw written in response to the article. The misinformation I saw spreading about street harassment, which was barely in the media at then, is largely what led me to launch StopStreetHarassment.org that month, write a book on the topic, and author numerous op-eds and articles explaining why this is a serious issue.

Over the past year or two, I’ve been amazed by how much the conversation about street harassment in the media has shifted, with just a few disappointing exceptions like the NY Post article, a recent piece from Fox about “letting men be men,” and an NPR segment last year titled “Catcalling: Ignore it or Enjoy It?” The numerous it’s-not-a-compliment articles in response to the NY Post piece are one example of this shift. Another piece of proof? Earlier this week, Playboy published a clever flowchart about catcalls and consent on the street. When I began speaking out on this issue, I never would have thought Playboy and I would be on the same side of the issue.

Social media has certainly helped push mainstream media in the right direction on street harassment. The growth of social media, personal, and community blogs, and more news outlets focusing on under-represented voices is allowing affected people to bring their street harassment stories forward every day. The constant outpouring of stories on all online media platforms is, I believe, what is changing the conversation so that the majority of the population no longer sees street harassment as complimentary.

But there are still ways that media can improve in its representation of street harassment. Lately, it’s stock photos that have my attention.

Based on the stock photos many outlets use to illustrate articles about street harassment, you’d think it was only white, thin, pretty women in their late teens or early 20s wearing revealing or tight clothing who face street harassment. Oh, and they’re usually on darkened streets or next to construction sites. For recent examples, see articles by Time, The Atlantic, Alternet, HuffPost Live, Shape, Bustle, and Elle. 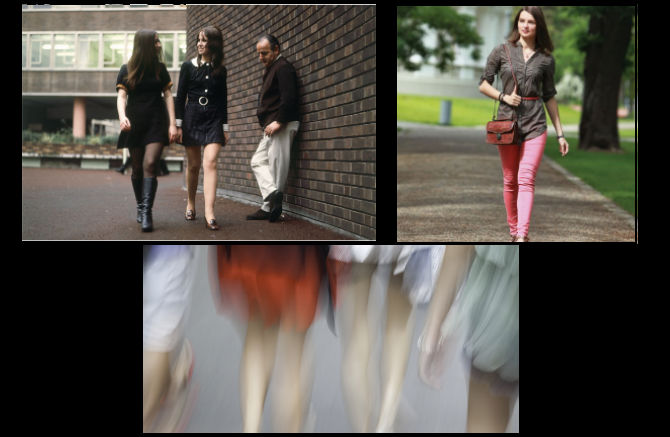 While there is no doubt that this demographic of women is harassed and assaulted—as a white woman who dealt with harassment daily while in that age group, I can personally attest to this—they are far from the only ones. From my website alone you can learn that street harassment impacts 7-year-olds, young teenage girls, middle-age women, older women, fat women, “ugly” women, women in wheelchairs, women wearing coats, women with eating disorders, gay and bisexual men, transgender individuals, African American lesbians, African American women of all sexual orientations, Asian American women, Native women, Muslim women, African American young men, Latino young men, and on and on. 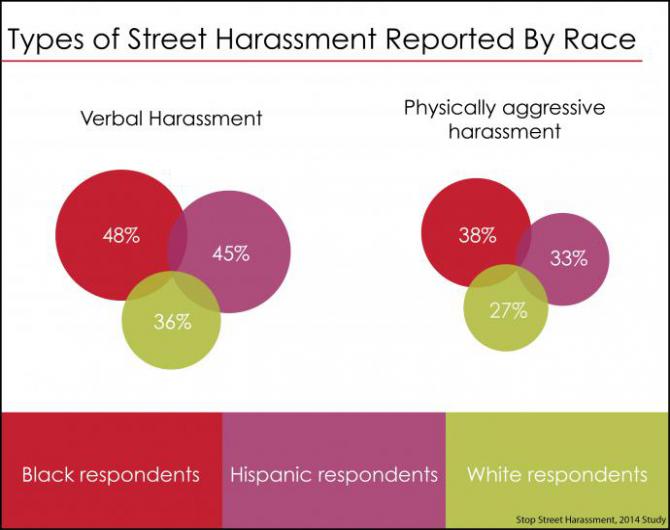 A chart from a 2014 study on street harassment shows the reality of catcalling and other harassment.

In addition to the stories people share online, we now have national data that shows the diversity of harassed persons. This spring, I worked with the public research firm GfK to conduct a nationally representative survey on street harassment. Since it was entirely funded by individual donors, we could only afford to survey 2,000 people, but it was still enough to have statistically significant and important findings, including:

With a larger sample size, I have no doubt the survey would have revealed even more facts about who is harassed. To try to address some of the limitations of the survey, I self-financed trips and conducted focus groups with college students, Native Americans, Latina immigrants, queer women of color, GBQ men, and more. They all had stories; they had all been impacted in very real ways by street harassment. (You can read summaries of the focus groups in the report appendix.)

In 800-1000 word street harassment articles it can be hard to address the nuances and complexities of the issue —and that’s where a really good stock photo could come in handy, to illustrate some of them. How much more would be revealed about this issue if a street harassment article was accompanied by a stock photo of a low-income teenage Black girl being harassed by a group of white adult men? Instead, the stock photos many outlets use work to undermine and erase the real issues of discrimination and abuses of power by portraying it as something pretty white women experience simply because they’re white and pretty.

Now that more outlets are treating street harassment seriously, we need the photos accompanying the articles to do so too by better representing harassed persons. Editors need to stop taking short cuts and using the most stereotypical images they can find. They need to dig deeper, look for more diverse photos.

Anyone who has relied on stock photos to illustrate a story knows that it can be challenging to find images with any diversity (race, weight, age, disability, etc) or that aren’t sexist. Earlier this year Sheryl Sandberg’s Lean In movement even partnered with Getty Images to create stock photos of businesswomen that are not so sexist and sexualized.  And they are better. But many other categories desperately need help, too.

In lieu of useful stock photos, I appreciate that a growing number of media outlets, choose to use images of activism with their street harassment articles, like Stop Telling Women to Smile posters and photos from International Anti-Street Harassment Week actions. I believe these kinds of photos better reflect the seriousness of the issue anyway because they show that people are upset enough by street harassment that they are taking action, and perhaps the reader should care that much, too. I’d like to see every outlet follow suit; that is one important way that media makers can continue to shift the public conversation about street harassment.

Holly Kearl is the founder of Stop Street Harassment, a consultant to UN Women, and a facilitator with The OpEd Project. 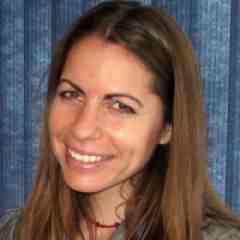 Thanks for this article. I have had some trouble when I post articles on street harassment, as many of my otherwise progressive friends don't take this as a serious issue. Some take uninvited compliments called by strangers as just that, compliments, with a response of a thank you and a feeling of appreciation. They say words are not the problem, rape and physical attacks are what should be garnering our attention, and my time would be better spent focusing on "real" problems women face. Work by activists like you are showing that there is a shift in our culture on street harassment, and continuing to publicize the problem of uninvited verbal contact will ultimately change behavior as to what is acceptable public conduct.

I am happy to see that someone is talking about this issue. This problem is very big here in Italy as well: male's way of thinking here remained that of "italian macho man", a man who "doesn't need to ask" and so on. It is very sad to see that this issue is considered non important also for some of my girl friends ...
Thank you for your job, it makes me fell less alone!

Thank you for all the work that you do and are continuing to do. Honestly, the issue at hand of the - at best - misleading nature of stock photos probably would never have occurred to me. Possibly because I to am young and white, but it makes sense - street harassment is definitely worth our attention and the media's attention, and it can only connect with people when we [visually] represent all people. Thank you for your enlightenment!