Whether they’re keeping busy as mistresses of all that is evil or simply threatening to get you and your little dog, too, bad witches in film have it rough. Hollywood’s villainous witches are often driven to cruelty by the sheer power they wield. More than that, they’re often portrayed as figures of irrational hysteria next to their cool male counterparts. But tired portyals of witches on-screen get a refreshing shock this summer: Disney’s new dark fantasy, Maleficent, succeeds in complicating the image of the bad witch.

Maleficent, a retelling of Disney’s 1959 Sleeping Beauty adaptation, is not perfect storytelling by a long shot. I found it boring for long stretches, cheesy in others, and its character motivations are more than muddled. Yet for all its many faults, Maleficent centers on a woman who is made powerful by magic, instead of corrupted by it. In the film, Maleficent remains rational and dignified as she grows into being a powerful dark fairy. Instead of possessing one simple attribute—evil—her character is complex and flawed. She’s not a figure motivated by either end of the moral spectrum, but who straddles the line between “good” and “bad,” allowing her to avoid the tropes normally assigned to her kind. In the script by Linda Woolverton, the star witch is neither a saintly bestower of goodwill nor a cackling schemer, unlike many of her cinematic sisters. All too often, witches in cinema are flat characters who are driven insane with lust for eternal youth or simply “evil” with no logical motivation. In Maleficent, we have a witch unlike many other witches of film: a woman who is not condemned by the magical material she inbabits.

Part of the problem with Hollywood witches lies in the use of evil witches not as genuine characters, but as a type. Historically, women were often accused of being witches because they transgressed societal norms, often by acting independently or by gaining power in a community. Women who do not fit into society’s ideal have also been historically perceived as hysterical and prone to overreaction, in order to belittle their opinions, their independence, their emotions, and their ideas. Films have committed that fear of female power and emotion to the screen—cautionary classic fairy tales about sorceresses incessantly pursuing knowledge and power became family films. It does not matter whether a witch is an old crone, like Yzma from the animated Emperor’s New Groove, or young and beautiful, like Eva Green’s Angelique in Tim Burton’s Dark Shadows remake, they share the same emotional space. Witches are often portrayed as less charming, less dignified, and less in control of themselves than their male counterparts. Power corrupts witches in ways that it does not does not corrupt wizards. While there are plenty of complex female witches on the good side of the fight in the Harry Potter world, compare the films’ Bellatrix Lestrange to Voldemort and you’ll see a difference in the treatment of villain types. Voldemort has logical motivations and an ability to control his power, Bellatrix is simply insane. Think of the White Witch from The Chronicles of Narnia, Nancy Downs from The Craft, and Lady Mary Van Tassel from 1999’s Sleepy Hollow, as compared with say, Jafar from Aladdin, or Loki from the Marvel Cinematic Universe, and you begin to see a vast disparity in how magical power supposedly affects each sex. The expression of power by women is far more likely to veer into madness, as though they’re not able to handle what they’ve conjured in their quest for control. 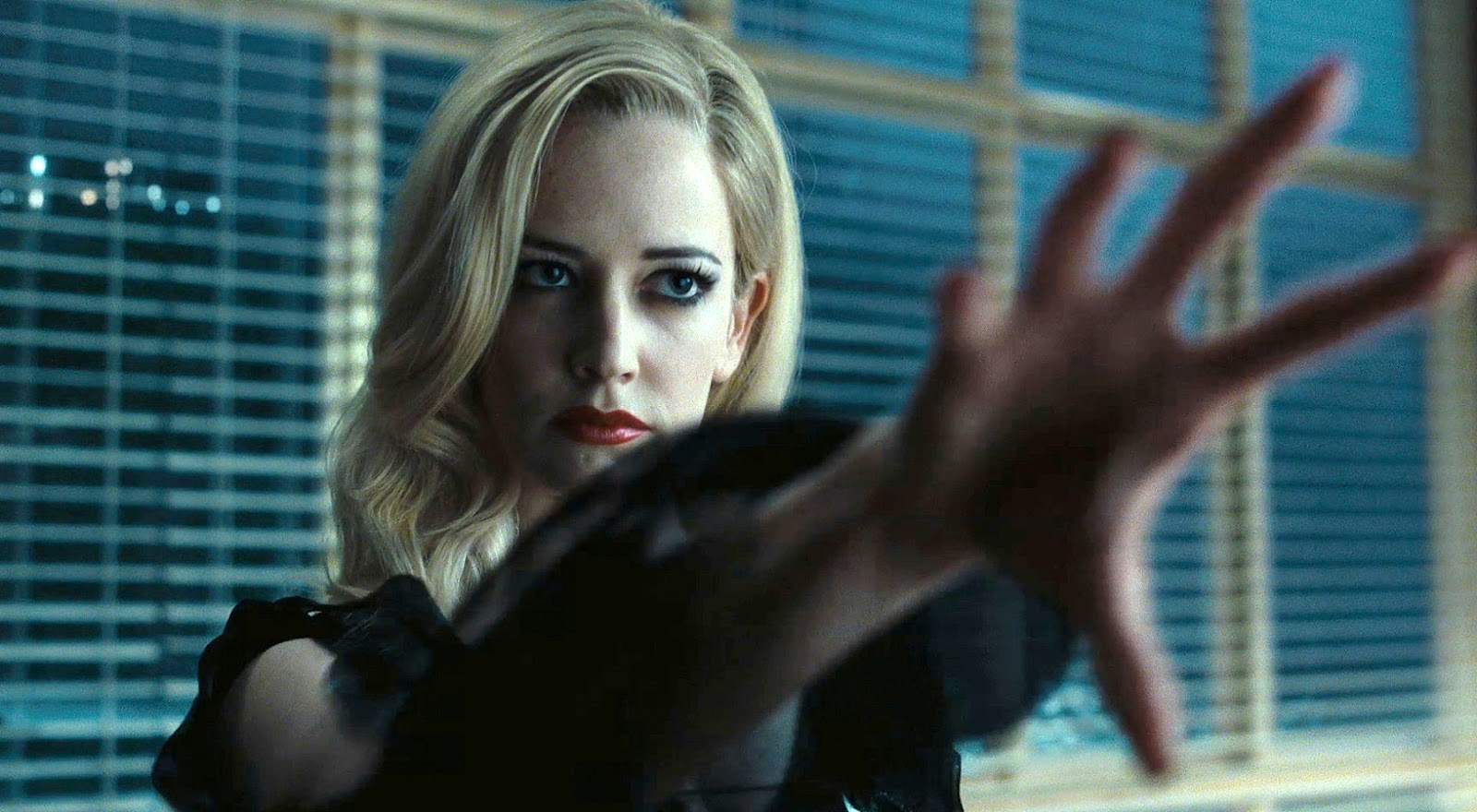 Maleficent is a more complex witch that either Harry Potter’s Bellatrix or Dark Shadows’ Angelique, above.

For many evil witches, their prime motivator is power, revenge, or youth. Typically, in the case of revenge, an evil witch will overreact, seeking vegeance on the hero for the slightest of transgressions. This overreaction shows “typical” witch irrationality, and acts as an idicator of her madness, a signal to the viewer that she is perhaps to be feared, but never to be taken seriously. In the classic Sleeping Beauty tale, Maleficent unleashes a curse on the newborn princess simply because her parents did not properly invite her to the girl’s birth celebration. Likewise, the Enchantress from Disney’s Beauty and the Beast curses an 11-year-old boy at the film’s start for his rudeness. Madam Mim, of Disney’s Sword in the Stone, meanwhile, sets off a wizard battle after threatening Wart because he trespassed on her property.

While the quest for immortality is one shared by villainous witches and wizards alike, a preoccupation with beauty and maintaining youth appears to be the providence of women alone. Male villains, even if they are long-lived or indestructible (such as Rasputin from the Hellboy series), are not portrayed with the same obsession with vanity as witches. While I couldn’t come up with a single male sorcerer preoccupied with his looks, a surfeit of female examples arose immediately: The Evil Queen from Snow White; similarly, Ravenna from Snow White and the Huntsman; Lamia from Stardust; Winifred and her sisters in Hocus Pocus; Monica Bellucci’s Mirror Queen in The Brother’s Grimm; Mother Gothel from Tangled; and more.

Due in part to Angelina Jolie’s sensitive portrayal of the title character in Maleficent, and in large part to the film’s script, the new film avoids many of these pitfalls. In the traditional Disney Sleeping Beauty story, Maleficent is a crazed villain who is seemingly evil through-and-through and rashly curses the young princess. In the new film, Maleficent’s motivations are much more deeply rooted—she’s treated instead like an actual, complete character. Choices that were written as unreasonable motivations in her previous incarnation are here real, intricate parts of her person. When she is bitterly betrayed by a former lover, starting her on the path to villanous deeds, Maleficent is icy, but never insane. The intepretation feels like a fair judgement: a commander of the powers of Hell becomes a more ambiguous individual.

Even though she’s been fleshed out with a backstory, Maleficent remains a decidedly villainous figure. But she’s not hysterical, driven mad, or given to overreaction, making her a standout in a villain genre that does not always have the fairest treatment of its female subjects. A better villain by far, after all, is one that is presented with reasonable judgment and a powerful purpose, even if it’s one only they can see. Maleficent may have its downfalls, but I’ll take it, warts and all, for the direction it dares to head. ­­

Zoe Chevat is a writer, animator, and illustrator who attended the CalArts MFA Program in Film and Animation and also contributes to The Mary Sue. Follow her on Twitter or on Tumblr.

"While I couldn’t come up with a single male sorcerer preoccupied with his looks. . ."
There is Howl from Howl's Moving Castle for the token male example.

Miyazaki's portrayals of men and women is one of the reasons why I love movies from Studio Ghibli. His work is rarely stereotypical, and as such, is incredibly refreshing!

Maleficent is NOT a witch she is Fae. The irrationality of the original curse speaks to one of culture and politeness-more so than what is between her legs. Granted she did go a bit far with the death part, but also the story could as well be an allegory to variety of things as fables/tales/and such are so often. Loki (of the Marvel origin) is more a powerful alien than a wizard. Even the original Loki of Norse mythos was a god or demigod. The Enchantress in Beauty and the Beast, again about politeness, was ALSO a fairy. Granted women were more likely to be witches but that COULD have something to do with the fact they gave life and bleed monthly and maybe there was some psychological fear of menses. (I mean there is a humourous fear of it even today). Maybe the fear of the menses translated into a mistrust of women and their "power" over Life? That is discussion more for Anthropologists to take.

Point being: if you're climbing onto a soap box and brandishing a wand...willow isn't always the best material a.k.a. FACT CHECK!

<p>Another perspective... Maleficent is essentially a mother. She "adopts" Sleeping Beauty (after cursing her). She watches over her, protects her from literally falling off a cliff. And spoiler alter! Ultimately, it is her who has "true love" for her -- not her father, not the prince, and bestows the kiss, which awakens her. She is the evil--and good--in all women who struggle with being mothers versus struggle with being witches, a male designation in most literary cases. And agree with author o this piece, she is complex, she loves and fear her power and its consequences over Sleeping Beauty, perhaps as all mothers love and fear their influence.

I had a similar read on it. I find it hopeful that there are beginning to be stories like this that are driven by healing bonds between mothers and daughters as opposed to heterosexual romance. Brave also has this same theme. I also found it to be a really powerful metaphor about divorce and the damage that parents can do to children by being wrapped up in mutual conflict. In the case of Stephen, his fear of the curse prevents him from ever having a relationship with his daughter at all.

Bellatrix isn't insane because of her wizarding powers, she is insane because she has spent over a decade in solitary confinement in Azkaban. The point of Azkaban is not just removal from society, but being driven so mad that you can never reintegrate (which makes wrongful imprisonment like Sirius' so awful).