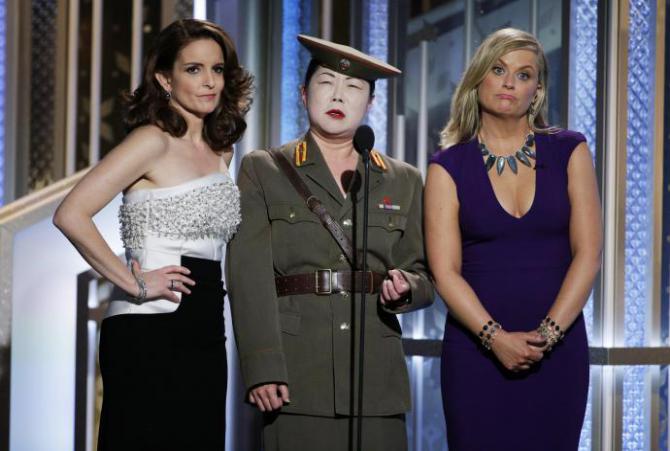 On Sunday night at the Golden Globes, I cringed when Margaret Cho appeared, dressed in an oversized North Korean Army uniform, looking stoic and completely silent at the beginning of a comedy bit spoofing The Interview. I’m not the only one: numerous viewers have questioned whether Cho’s bit was a funny critique of the despotic state or just an offensive “empty caricature.” On Monday, Cho herself jumped into the conversation and tweeted that as a person of Korean descent, with family members directly affected by the dictatorial rule, she had a right to poke fun of the regime.

My initial gut reaction saw her performance as a lazy stereotype to entertain the largely white audience at the show and at home.

In an interview with Buzzfeed following the awards show, Cho responded to the criticism, “I feel if there’s negativity, it’s other people’s judgments about what they feel that Asian-Americans are allowed to do, really.” She continued, “I think that we’re being held down by that incredible tide of invisibility that we’re constantly fighting. Whenever there is visibility, it’s shocking.”

The issue of visibility points to a bigger problem with Cho’s character in the context of the awards show: the Golden Globes is attended mostly by white people and hands out awards to mostly white people, celebrating their work in an industry that has historically marginalized people of color. The character might not have felt as awkward if there were numerous Asian American people onstage on Sunday night. Instead, the fake North Korean general was the only Asian person to appear onstage during the ceremony. Her caricature played out against the backdrop to an overwhelming number of white actors and directors who won that night.

In Amy Adam’s acceptance speech for her performance as artist Margaret Keane in Big Eyes, she pointed to all of the inspirational women in the room and how they have “such a strong voice” who spoke to her daughter. When Maggie Gyllenhaal won for her role in the BBC miniseries, The Honorable Woman, she said, “What I think is new is the wealth of roles for actual women in television and in film. That’s what I think is revolutionary and evolutionary and it’s what’s turning me on.”  Adams and Gyllenhaal are talking about three-dimensional characters and the strength of the women who play them. They are celebrating the “women in the room,” women who showed up as themselves and have no issues with finding other women who looked just like them onscreen.

While recognizing that Asian Americans aren’t a gigantic generic monolithic group, for a woman like myself, Cho was the only person in that room who looked like me. And there she was onstage, flanked on either side by co-hosts Tina Fey and Amy Poehler, who didn’t have to dress up as characters in order to make fun of anyone.  The stilted role left little room for nuance in Cho’s criticism of the North Korean government. Margaret Cho would have undoubtedly been funnier just being Margaret Cho at the ceremony.

Gina Rodriguez, whose parents are Puerto Rican, was the only person of color to receive an acting award, for her role as the title character in Jane the Virgin. She gave an emotional speech where she said, in part, “This award is so much bigger than myself. It represents a culture that wants to see themselves as heroes.”

It’s not so much that I need to see a hero who is Asian American, I’d just like to see her out of costume and as herself.

Related Reading: The Madame Butterfly Effect — Tracing the History of a Fetish

While I agree that the lack of diversity in the room was cringe-worthy, Cho's performance wasn't. Why is her "role" as Korean woman supposed to come before her role as comedienne? She did a bit she thought was funny and it isn't fair to expect anything else from someone in her profession. If it isn't cringe-worthy when Tina Fey does her Sarah Palin Impersonation then why is this? What's cringe-worthy is holding people to different standards based on their race.

I agree. I would rather celebrate the fact the there are THREE WOMEN on stage, doing WHAT THEY WANT, and not at Lilith Fair either, but the GOLDEN GLOBES. That's huge. It's not fair to hold celebrities to our ideas of what they should always do either. If you want to see something different, then go do it yourself.

<p>This comment has been removed because it violates our commenting policies by personally attacking the author. Keep it civil, folks!

I thought this piece was going to be on how there are groups you can't make fun of or imposed limitations on comedy, but it turned out to be about lack of diversity in Hollywood. Apologies for the prejudice.

On the topic, I found Margaret Cho's bit to be funny, and I thought she could have gone harder and farther with it. Perhaps there were other ways she could have mocked the North Korean authoritarian regime, but it doesn't make this bit less funny.

I also found it interesting that all this time, Margaret Cho's jokes were about how she wasn't viewed as American even though she was born and raised in the US. How she's still perceived as not a full American, or worse, a complete outsider. Now that she does this, suddenly people are saying how Americans like her are mocking and being insensitive to Asia. Oh the irony.

Having said all that, I liked this opinion piece. The author articulated her reasons well on why she found the bit cringe-worthy without damning opinions that don't share hers. Very hard to find nowadays, especially when it's about comedy and comics.

More power to Bitch and the author!

Oh, our reaction is a reflection of our own cultural insensitivities about what a Korean comedian should be able to get away with? They should be able to do whatever that think is funny and comedy comes first? What if Amy Pohler came out in black face? Still cool with it?

This piece needed a disclaimer stating that Margaret Cho wrote the forward to your "Bitchfest" book that is available for purchase from the shop. Suggestion: Next time you criticize someone who has done a favor for you in a public space, please consider including a disclaimer in the piece of your affiliation or association with such person(s). While reading this piece, I felt like you were being "mean girls" (Pardon the pun) saying "nasty" things about a friend behind that friend's back, even if it is in the form of intelligent, constructive criticism. Thank you.

So because there were no Asians in the audience or winning awards, you would limit Margaret's creative participation? I am hearing "Until integration has been fully achieved, act white if you dare to impose yourself onto the stage." You would rather have her being herself, which is all well and good, but the Globes hired Tina and Amy to host and not Margaret. I thought the bit was funny and appropriate and could have hit harder as well.

Relevant: 15 Latina Activists Who Inspire Me 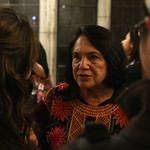 by Emilly Prado
15 women who have dedicated their lives to unwavering advocacy.