Marge Simpson is on the cover of Playboy. Yes, you read that right. | Bitch Media

Marge Simpson is on the cover of Playboy. Yes, you read that right.

So yeah, um, this is happening: 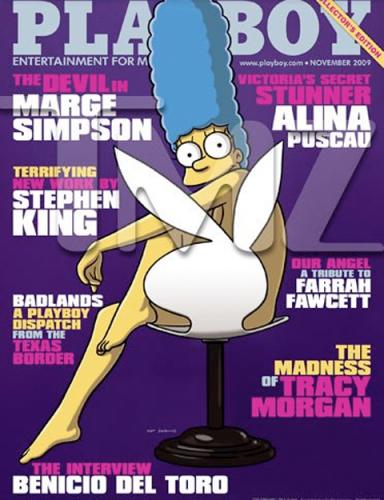 Believe your eyes, folks. Marge Simpson is on the cover of Playboy’s November Issue. W.T.F?

Apparently, this is an attempt by Playboy to attract a younger audience. You know, by putting a cartoon character on the cover of their “adult” magazine. Honestly, I don’t know what is weirdest about this. Is it:

- Playboy thinking that a cartoon character is remotely erotic/sexy to the average reader?

- The Simpsons thinking that putting their animated character on the cover of a nudey magazine is a good idea?

- That Playboy CEO Scott Flanders insists that the 3-page spread of Marge inside the magazine contains only “implied nudity”? (Thank goodness, because the real worry here was that we might see a cartoon nip slip.)

- That this all might turn out to be a wild success, proving that I am unknowingly hooked on crazy pills?

Seriously, what the hell IS this Playboy cover? And what would Lisa say if she saw her mother this way? Think of the young feminists! (OK, that sounded like a joke, but I am actually serious.)

What do you make of all this nonsense?

Playboy has run out of ideas.

Maybe my feminist credentials are about to be revoked, but I actually think it's hilarious. I'd be curious to read the article (if there is one?) that goes along with it. But then, I'm one of those who has actually read the articles in Playboy and found some of them quite good.

I don't like Playboy -- I don't think this is any weirder or more misogynist than any of their other covers. Most of their models look underage.

I also think this is hilarious. (Subscribers will have a real woman model on the cover; this is the version for "newstands".) I love how *startled* Marge looks in the picture. It's in-character for her. Ha.

And having been around the internet, there are a lot of people who find cartoon characters of various kinds sexy.

Kelsey - I'm not sure I'm clear on why exactly you take issue with this particular cover. To me, there's no difference w/ Marge Simpson being on the cover than whoever was on the cover last month or the month before.

It's bizarre, to be sure, but in a lot of ways, isn't it LESS problematic than showing a real woman?

You're right, Mandy; my post was pretty brief. Honestly, I take more issue with <i>The Simpsons</i> here than I do with <i>Playboy</i>. if only because I hold them to a higher standard. Not only are they an animated series (which, even though the show is written for adults, clearly appeals to children as well) but they fancy themselves as somewhat subversive, or at least critical of mainstream culture. A <i>Playboy</i> spread doesn't really fit that image.

Also, and I may sound like a major Puritan here, I don't like the idea of an animated character on the cover of <i>Playboy</i>. Similarly to the way Joe Camel was banned from ads because of the animation's inherent appeal to young people, I think this animated cover gives kids the wrong idea about <i>Playboy</i> and its contents.

You make a good point though, in that this cover is not necessarily more or less offensive than other covers, it just offends me in a different way.

Marge on the cover, and the CEO's name is FLANDERS?

A) Cartoon characters being eroticized is weird? Have you <i>been</i> to the Internet? If anything, <i>Playboy</i> is very late to the party. The ladies like cartoons, too (sorry for the extreme-1997-ness of some of these sites, but that just shows how far back it goes:

C)Marge Simpson in <i>Playboy</i> is still kinda icky, but not all that weird.

Yeah, The Simpsons is definitely not a kid's show. Just because it's a cartoon doesn't mean it's a children's show... I mean, Hello South Park, Family Guy, American Dad, etc? I wasn't allowed to watch it when I was a kid, it's for teenagers and adults.

And another thing.... kids are already curious about Playboy, and I don't think that this cover will spike curiosity at all. I was curious about the magazine when I was a kid, every kid is curious about things that they aren't allowed to do or see or are somehow taboo.

Speaking as someone who was ever a kid, the idea that a cartoon model on the cover of Playboy would enhance the allure of pornography for underage consumers is just shy of laughable.

Marge Simpson is not a real person, let alone an icon to young feminists. When has her portrayal on the show ever been especially feminist to begin with? When has she been portrayed as admirable, rather than just long-suffering? This is not the fall of a mighty gender warrior, even a pretend one.

When I was in sixth grade or so, which would be about 1990, a classmate brought in to school an image that he had found on a BBS and printed off. It explicitly depicted two members of the Simpsons family engaged in a sex act. (I should add here that it was really gross.) We didn't really know there was such a thing as bootleg images, so it seemed pretty official to us.

Around the same time (within a year or so), an issue of Playboy hit the stands with a cover model who was made up to resemble Jessica Rabbit from Who Framed Roger Rabbit?. It was a real person in costume.

But as an eleven-year-old boy, neither of those things held remotely the interest for me that the usual content of those magazines did. It was LESS exotic, LESS exciting to contemplate.

Also I did not think of Marge Simpson as hot. I was a kid and she was a mom.

FWIW, I once did a side-by-side comparison of Playboy and the New Yorker and found that Playboy had about double the number of articles bylined by women.

I just might buy a copy - it would be the first Playboy I would have bought in about 25 years - just for the novelty. But they are saying that it's the first cartoon character on the cover, ever. I could have sworn that Jessica from "Who Framed Roger Rabbit" was on the cover back in the day. Maybe not - might be that the dead brain cells are outnumbering the live ones today.

Relevant: New Book "Action" Is a Candid Reflection on Sexuality 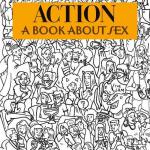 by Rachel Davies
The honest book mixes memoir with sex-ed.