New Music Overload! Here Are 20 New Feminist-Friendly Songs for May. 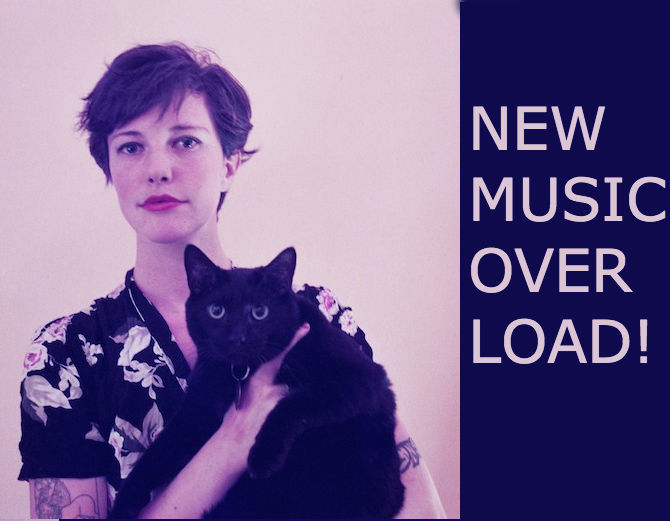 After a whirlwind of music discoveries at South by Southwest music fest last month, I’m happy dish up this month’s heaping helping of new feminist-friendly music I can’t stop listening to!

Kenyan folksinger Naomi Wachira names South African musical activist deity Miriam Makeba and American folk icon Tracy Chapman as her two biggest influences, which makes for a heck of a musical dinner party. Wachira is more mellow than Makeba and more unabashedly joyful than Chapman, and brings a border-blurring discourse to her music that is uniquely hers. “Anywhere” is a perfect example of what Wachira is setting out to do- find commonality, point out what’s beautiful everywhere. Her debut full-length album, which came out in January, was produced by Damian Jurado—which compounds its indie cred and positions it as Kind of a Big Deal.

If the movie Clueless were remade today (P.S. not as far-fetched as you might think—it turns 20 next year), this pop-rock gem would be opening credit fodder for SURE. The music is bouncy, but the lyrics are sincere, and the NYC trio doesn’t pull any punches in their expressions of youthful angst and identity. (Which, when preceded by the word “youthful,” pretty much mean the same thing.) The band’s music is great as it is, but the icing on the Wise Girl cake is that lead singer Abby Weitz is also a mega-funny writer, as in her excellent retelling of a botched audition for Karen O on diffuser.fm.

Speaking of Karen O, Her Yeahness has endorsed Berlin underground performance artist Mary Ocher, whose new album Eden plays like a missive from the deep jungle of art-pop. Her videos are like Sia’s, with a lower budget, and her voice is like Grace Slick’s, with an accent. Any artist that can freak out Karen O. is OK by me, so I’ll watch what Ocher does next with bated breath. Here’s “The Road.”

NYC folk duo Hannah and Maggie fill the crsytalline harmonies, acoustic ladyrock void left by Tegan and Sara when T&S went dancey. (NOT THAT THERE’S ANYTHING WRONG WITH THAT I LOVE YOU TEGAN AND SARA.) Put another way, if you love old Tegan and Sara, and/or the Indigo Girls, you’ll love this folksy pair and their sweet, stomping barnburners. Here’s “Home As We Know It,” which follows its singers on tour through the US.

Since I mentioned Tegan and SAra, Vancouver trio The Courtneys are on tour with fellow Canadians T&S this spring and summer. Their pop is sun-drenched and peppy, and will bounce you straight into summer. Also, if you have ever wanted a vampire teenage boyfriend, first of all, no judgment, and second of all, this is your jam.

Welp, guess we have to make a Jolene Mixtape 2.0, because 18-year-old Mary Sarah’s duet with Queen Dolly cannot be missed. Period. Her debut album of duets with country music heroes (Dolly, Willie, and Merle, Oh my!!) comes out May 13th. LE WANT.

I’ve been waiting for this album, or one like it, for a long, long time. Esme Patterson, who sings in Paper Bird and has worked as a vocalist with Anais Mitchell and Tennis, just released a rootsy country album of responses to classic songs about women, from the woman’s perspective. She walks in the footsteps of Elvis Costello’s Alison, Eleanor Rigby, and Townes Van Zandt’s Loretta, among others. On the inspiration for the album, Patterson had this to say:

“I was learning to play a Townes Van Zandt tune called ‘Loretta,’ and as I was singing the words, I got angrier, thinking how one-sided and subjective a lot of ’love songs’ are, and how a lot of women immortalized in songs might tell a different side of the story if anyone ever asked,” she says.They are archetypes from famous songs, frozen forever in black and white. I did my best to add some color and give them some humanity”

Since we just featured Jolene, here is Esme’s response to Dolly Parton’s classic tune from Jolene’s point of view, “Never Chase A Man.”

Beirut-raised, Paris-based singer Yasmine Hamdan is rewriting the script for women singing in Arabic. Her music, which has evolved from the electropop of her first group Soapkills, to the mellower, more traditionally-influenced electronica found on her first solo album, Ya Nass, which came out last month. She’s got a beautiful, distant-sounding voice, but the distance comes across as cool, not chilly. Hamdan was raised a polyglot, and makes a bold statement in choosing to sing exclusively in Arabic dialects, even on a major international release. She’s clearly not out to fulfill expectations, when she can change them altogether instead. Here is the beautiful video for “Beirut,” compiled of Super 8 tape from the 1940-70s.

Will you know that I mean it as a compliment if I say that Australian dance-pop phenom Betty Who reminds me of Sporty Spice, Katy Perry, Pink, and Robyn rolled into one? Because I mean it as one. She’s better than the sum of those parts, though. Her music is a shot of endorphins right to the chest cavity. Get ready to dance into the sunny months, y’all. Here is the chemically irresistible video for “Heartbreak Dream.”

I have a not-so-secret soft spot for performance art, and Brooklyn duo Cross (comprised of Lily Benson and Leslie Allison) strike a major sweet spot for me between feminist performance art and gently, harmony-rich experimental electronic music. This year’s new album, It’s Curtains, is 10 songs in a row of “feminist play, magic realism, and queer harmony,” according to their website. Yeah, no, I’m 100% in, after that description and listening on loop to the new album’s first single, “The Ladies Room.” See for yourself!

It’s probably been just long enough since SXSW that you’ve forgotten how obsessed I am with electro-soul-R&B pair denitia and sene., right? No? You remembered? And you are now obsessed, too? GREAT! Because they have a fabulous new song and video out. Check out “Divided,” below. SWOON.

Producer and singer Casey Dienel, who performs as White Hinterland, stripped way down to release her third album, Baby, and she’s got an intense, powerful collection of songs to show for it. Dienel moved back in with her parents to record this album, building a studio in the basement of her childhood home. The sense of solitude and the specific brand of creativity that comes from being alone in a room with sound equipment permeates Baby in stunning ways. Listen to how the title track winds down, until it’s only Dienel’s voice pulling the song to its climax. She pulls no punches, and offers exactly what she’s got inside.

“Drown With The Monster” is a shot of whiskey on an empty stomach, in the best way possible. It’s the first single from hard rock outfit White Lung’s third album, which comes out this June. Addiction, body dysmorphia, and sexual dynamics are all fodder for the Vancouver band’s lyrics. The primal, immediate catharsis inherent to the rock/punk borderlands render this listening experience therapeutic.

Stomp ‘n’ roll Austin couple Carley and Jonny Wolf are talented enough not to need gimmicks, but they have a good one: as a wedding gift, the pair received a one-string pawnshop guitar. Instead of fixing up the instrument, they decided to build a band around it. Carley plays the one-string guitar and the duo trade swampy, vintage rock vocals. Their DIY ethic will appeal to fans of Buke and Gase. Carey makes the same geographical mistake Journey does in “Don’t Stop Believin’ ”: there is no such thing as South Detroit. The city is oriented from East to West. South Detroit is Canada. The more you know!

Pop music is meant for the masses, but that doesn’t mean it has to be simple. Swedish artist Elliphant (Ellinor Olovsdotter) is a provocateur, but not in the way that term is usually applied to female singers, ie when they wear tiny clothes and writhe. Elliphant’s music is provocative because it’s got more raw energy than a lot of mainstream pop - energy created by the singer, not the production value. The video for “Revolusion” demonstrates how busy Olovsdotter’s vision is; in various highly-stylized scenes, sometimes she’s dancing, sometimes she’s glaring at the camera, sometimes some robots are breakdancing, and sometimes she’s shrink-wrapped in a deli tray. I want to see more from her, STAT.

My beloved Shook Twins, a close-harmonizing, multi- (multi- multi- multi-) instrumental band based around twins Laurie and Katelyn Shook, are back with their third album, What We Do, out May 14th. They were in Austin for SXSW last year, and I pointed out then that they are in the middle of a growth spurt, musically: growing their band, growing their already-extensive list of instruments the twins both personally play (it’s something like 12 at this point), and growing their lyrical maturity. They’ve done all of that with this album, developing into a mighty fine folk band ready for some big-time attention. Go, Shooks, go! Here’s the title track, performed live at the Loveless Cafe last October.

Merril Garbus, the mastermind behind tUnE-yArDs, is back after three years with a funky new album, the band’s third. She’s as creative and genre-bending as ever. For this album, she studied Haitian drumming, incorporated vintage arcade sound effects, and called in some large fuzzy animals. Here’s the bonkers, exuberant video for “Water Fountain.”

Boyfriend is a sex-positive, sexually ambiguous rapper from New Orleans who takes the controversial POV of a jealous lover in “Jealousy,” the latest single from her forthcoming album (keep an eye out in July). Instead of defending jealousy, though, Boyfriend explores how suffocating jealousy can be, between verses that whimper and growl in equal measure. It’s a fascinating song from a unique new voice. Listen to “Jealousy” below, and read a little more backstory in the interview she gave earlier this year to HuffPo here. C’mere, July release date!

Australian singer-songwriter Courtney Barnett is already sitting pretty in my top-10-new-songs of 2014 list, with her gentle-but-piercing indie rock. She’s got the kind of honesty and earnestness in her songs that Kate Nash had at the beginning of her career especially—it’s so refreshing, almost startling, that it makes you wonder what everyone else is singing, if it’s not the truth. Here’s the beautiful animated video for “Anonymous Club.”

What have you been listening to lately? Let me know in the comments!

The last four songs are repeats of each other, that should probably be fixed, great song selections overall though!

Thanks for catching that, Emma! It's (hopefully) fixed now.

Thanks for this list it will go nicely on my Google+ stream and on my FB page. I love it when these lists get compiled - I never get beyond 'best 5' myself ;-) Thanks so much for making this great stuff available.

Pretty much everything from Banks is golden. Here is her newest track: https://www.youtube.com/watch?v=S98Q11zhS-g