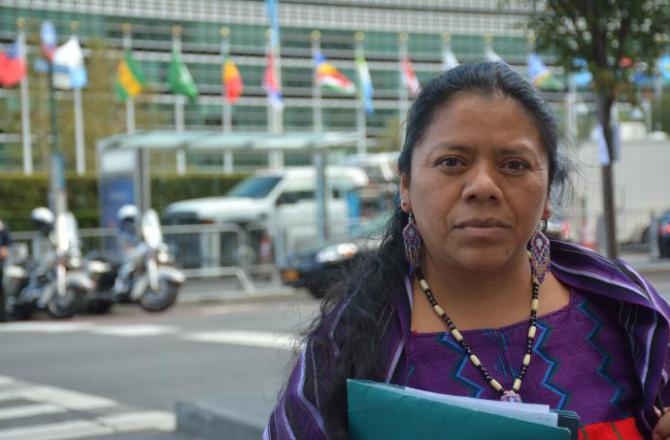 For months, indigenous women in Guatemala have been protesting against a tough foe: biotech giant Monsanto. Last month, the country’s indigenous-led social movement won a major victory when the congress voted to repeal the so-called “Monsanto Law.”

The Monsanto Law would have granted exclusive ownership rights of a few genetically modified seeds to a handful of transnational companies. Social organizations in Guatemala claimed that the new law violated the Constitution and the Mayan peoples’ right to traditional cultivation of their land in their ancestral territories. Corn is integral to the history and culture of indigenous people in Guatemala, explains human right activist and member of the Mayan Peoples Council Lolita Chávez. “Corn taught us Mayan people about community life and its diversity, because when one cultivates corn one realizes that there is a variety of crops such as herbs and medical plants depending on the corn plant as well,” says Chavez. “The corn shows us how to resist and how to relate with the surrounding world.” 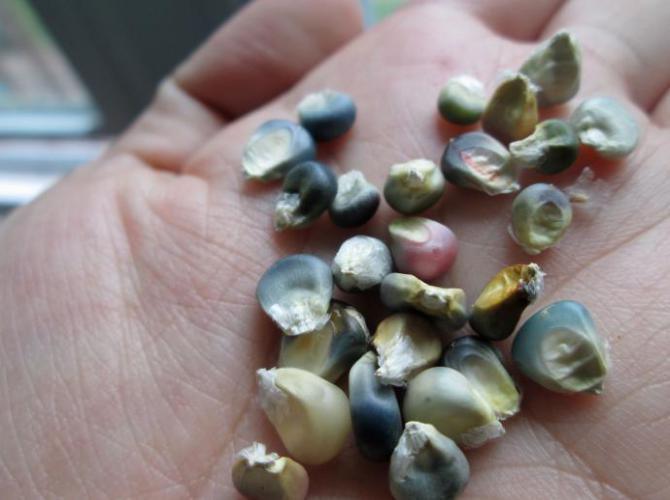 Guatemala’s government adopted the Monsanto Law last June as a provision of a 2005 US-Central American trade agreement. In granting patents to transnational seed companies considered to have “discovered” new plant varieties, the law essentially privatizes seed ownership in a country where seeds varieties have a long and diverse history.  In Guatemala, where about 70 percent of the population dedicate their life to small-scale agricultural activities, numerous groups had reasons to oppose the law. There was a great risk that the Monsanto Law would have made criminals of small farmers who have been cultivating corn and black beans for their own consumption for generations. If farmers’ seeds mixed with patented seeds from other crops as a result of pollination or wind, they would be breaking the law—unless they paid for a license from Monsanto.  Another risk expressed by ecologists was the fear that the costs for the patented seeds would have caused an increase in prices, worsening a food crisis for those families who could not afford to buy a license to seeds. Academics and Mayan peoples also feared that the law would have intensified already existing fierce social conflicts between local Mayan communities and transnational companies. The National Alliance for Biodiversity Protection summed it up in July, noting that the law is unconstitutional because it prioritizes the rights of companies over people who have freely used seeds for generations. “It’s a direct attack on the traditional knowledge, biodiversity, life, culture, rural economy and worldview of Peoples, and food sovereignty,” the Alliance wrote in a statement.

There are many Mayan women at the front line of the resistance to the neoliberal politics that attract foreign investments into high risk projects in Mayan communities. Nobel Peace Prize winner and Guatemalan indigenous woman Rigoberta Menchú explained the larger perspective when I sat down with her in her home in February this year:

”Inequality as well as racism is widely spread and deeply rooted. The private sector fear the Mayans and think that if our country develop in a direction in which all citizens are included  the indigenous people will demand their rights and manage the natural assets. Therefore we have a system aiming at oppressing the Mayans.”

When Congress convened on September 4, Mayan people were waiting outside the Congress and Constitutional Court, demanding a complete cancellation of the law—something very rarely seen in Guatemala. Protesters took over the streets for 10 days, marching through Guatemala’s capitol. They did not march in vain. After some battles between the presidential Patriotic Party and the Renewed Democratic Liberty Party, the Congress finally decided not to review the legislation, but to cancel it entirely.

It is impossible to predict how this controversy might unfold, but the reality in Guatemala today is one marked by an ongoing conflict between the government and the Mayan people, who constitute over half of the population. Lolita Chávez hopes this victory is just the beginning of more political power for indigenous people in Guatemala. ”We have just taken the first step on a long journey in our struggle to conquer the sovereignty of the people in Guatemala,” she says.

Christin Sandberg is a Swedish journalist based in Guatemala who follows feminism, human rights, and indigenous grassroots movements.

nonsense - no such thing as Monsanto 's law. Ignorant people remain ignorant . Seed diversity is not in danger from Monsanto. That seed they are holding is useless unless bred into vaguely modern lines (nothing to do with GM)

See the colored kernels potent natural toxins bred out of modern corn - feed that to animals and your chicken is blue skinned.

http://rt.com/usa/monsanto-bill-blunt-agriculture-006/
Monsanto Protection Act, in the US

http://www.globalresearch.ca/guatemala-rejects-u-s-trade-law-protecting-...
Illegal and punishable by imprisonment if farmers do the following
*Possess or exchange protected seed varieties without authorization.
*Possess the harvest or save seeds for future use.
*Use the product of “varieties essentially derived from the protected variety.” Meaning even unintentionally via contamination.

I hope you can read and understand

If Monsanto's patented seeds become the basis of agricultural production in a given country, then yes, seed diversity could be endangered.
If Monsanto corn production squeezes out heirloom/native crop production, then native corn crops, and their seeds, may fall into disuse and gradually die out.
Further, if Monsanto seeds are hearty enough to drift into other non-Monsanto fields and take over, then such crops are endangered.
And further, if Monsanto can sue independent farmers for inadvertent cultivation of Monsanto crops (ie when seeds drift into farmer's non-Monsanto crop fields), independent farmers may not be able to afford to continue farm their own seeds (again- disuse & die-out)
Lastly, the blue seed in the photo may or may not be "useless" ( I'd certainly like to see some sources!), but the Mayan farmers surely aren't fighting to protect only one kind of native seed. AND they'd have NO reason to cultivate or fight for seeds they can't eat or feed to their animals

The fact that your comment strays so much from reality makes me wonder if you are an alien from another planet or just some right wing nut job with a 2 year old's grasp at the problems we are facing in this world.

EDUCATE YOURSELF! Knowledge may be scary but it is powerful. Try and get yourself some.

Monsanto is evil and will stop at nothing to control the world food supply while poisoning people and lining their pockets in the process. Country after country has blocked Monsanto coming in and taking over. The USA is corrupt enough to let them rule our food with genetically modified garbage to the point they are suing small-time, local farmers over winds carrying their patented seeds (a PATENT on SEEDS--crazy!) to their farms. If these farmers use Monsanto's patented product, then save a single seed, they can--and are--sued for INTELLECTUAL PROPERTY THEFT. Sickening. So beyond happy to see these indigenous women fighting a company that the US wouldn't dare touch at this point. We are behind the times!