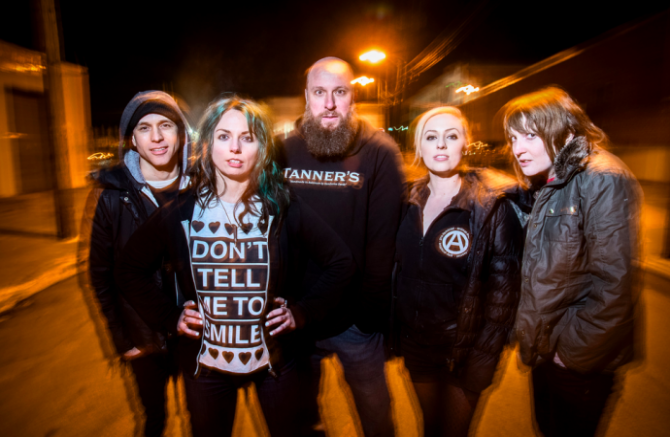 Shawna Potter sits in her bedroom in Baltimore, noting that this room is the coldest in her apartment. Potter fronts feminist hardcore band War on Women, which played on a big bill the night before alongside Municipal Waste, Torche, Old Lines, and Night Birds at the Baltimore Sound Stage. Potter’s not one to brag about a glamorous rock star lifestyle: when we meet up in the afternoon, she’s still unabashedly tired from the gig.

War on Women released their eponymous album on Bridge Nine Records on Tuesday, February 9, following up on their 2012 EP release Improvised Weapons. The co-ed group of five musicians—comprised of Potter on vocals, guitarists Brooks Harlan and Nancy Hornburg, bassist Suzanne Werner, and drummer Evan Tanner—play heavy metal riffs that hook listeners with their striking attention to details and melodies.

The band name struck Potter as “really fucking punk.” “I’m not going to dance around the fact that there is a war on women. I’m not implying it. I’m telling you,” she pronounces.

Throughout the 11-song album War on Women, Potter verbalizes her opinions as bluntly as punk did in its heyday. But Potter is quick to differentiate herself and her band’s musical leanings from either old-school punk or riot grrrl. War on Women recently toured with the heavy, anarchistic group Propagandhi. She cites her own musical influences of thrash and her love of early Metallica.

“I mean, me and Nancy listen to Rihanna,” she also says with a little laugh. “But I don’t know if that comes across in a guitar line!”

As the primary lyricist, Potter writes from both personal experiences and by synthesizing events happening around her, channeling her roots growing up in Houston and attending high school in Nashville. “It doesn’t necessarily have to happen to me exactly, but it’s like, I’m telling a story to get to the essence of the truth of how people are actually affected by gender-based violence, and then filtering it through my own thoughts and then having a take on it,” she says.

Potter has also spent the past four years running the Baltimore chapter of Hollaback!, a non-profit dedicated to raising awareness about street harassment and offering victims nonviolent tools to combat it and cope with it. While she’s moving out of her current volunteer role to a more advisory board position due to upcoming War on Women commitments, she gushes about the positive experiences she’s had working with the organization. “It’s made me learn the language of activism, so that I can talk about gender-based violence accurately.”

Tracks on the new LP range from the 78-second speed-punk burst of “YouTube Comments” to the six-minute “Diana La Cazadora,” which address the immigration rights of Mexican women in Juarez, Mexico through Spanish spoken-word. But most songs fall between the two-to-three-minute range and call out American society on its politics, as well as social and gender inequalities. Titles range from “Roe V. World,” a global scope on the famous abortion case of Roe vs. Wade in 1973, to the blunt, questioning “Pro-Life?”

“We’re stilling singing about the same issues and the same ones still resonate,” says Potter.

Rape is one of those subjects, and War on Women tackles it almost immediately on the record. In the second track called “Say It,” War on Women attacks the unfair dualities for women surrounding the context of rape. Potter asks situational questions like, “What if I was 30 or 12?” and “What if I had one drink?” But then, she turns her barrage of questioning from the first person to the second person, asking, “If the victim is your daughter would that complicate anything?” As the raging, repetitive chords transition into the chorus, Potter mandates, screams, “Say it! Say it! I was raped!”

Part of what makes War on Woman so powerful comes through their aggressive and motivated deliverances of this material. Potter recalls performances for people who had never seen women shred on guitars before, as well as compliments from men who didn’t add the sexist phrase, “for a girl” after congratulating them. They’re small victories, but they illustrate the work that still needs to be done and the impact that such a feminist hardcore band can make.

“All we can do is be a good band,” says Potter. “And then any fucked up ideas about women in music that people have will hopefully go away.”

Punk fans rejoice! Hilary made this feminist hardcore mixtape to accompany this article.

Feminist Hardcore and Punk from BitchTapes on 8tracks Radio.

Hilary Saunders writes things. She’s an un-ironic believer that rock and roll can save the world. Follow her on Twitter @Hilary_Saunders.