Meet the Awesome League of Female Magic: The Gathering Players 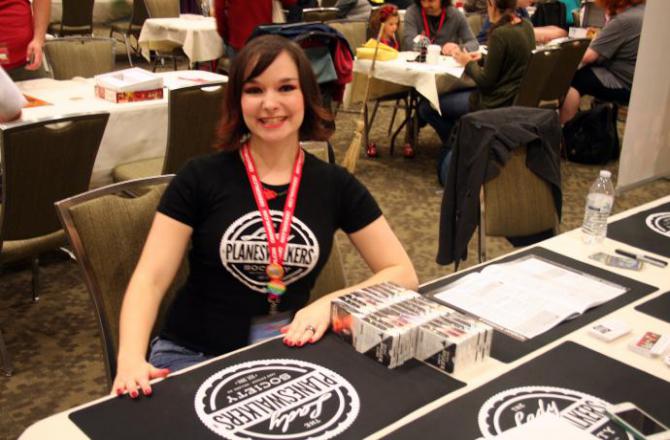 Tifa Robles at the gaming tables where she and others teach women how to play Magic: The Gathering.

This past week at Geek Girl Con in Seattle, I met other women who had seen every episode of The X-Files, played every Legend of Zelda game, read every issue of Batgirl, and, sadly, who had experienced similar frustrations with harassment and gatekeeping in the geek community. Many different subsets of geek culture are well known for trying to keep women out through various “gate keeping” techniques such as testing women fans on their knowledge of their particular fandom or game or accusing them of faking interest to get attention from men. The community surrounding Magic: The Gathering is no exception.  Magic: The Gathering is a collectible trading card game published by Wizards of the Coast, the same company responsible for Dungeons and Dragons. Over the last twenty or so years, Magic has gained significant popularity and become a staple of nerd culture. Magic: The Gathering is played in a competitive tournament setting, casually at kitchen tables, while waiting in line at cons, and everything in between. Magic tournaments are not often a welcoming space for women despite the efforts of many within the community so, naturally, Magic horror stories were a popular topic of discussion at Geek Girl Con.

I work at a popular board game store in Portland, Oregon and part of my job is running Magic tournaments. Hardly a day at work goes by where I do not get asked “So… do you actually play Magic?” or I get an offer from someone to teach me the game—sometimes even after I have given them card recommendations. During the very first week on the job, a customer asked me if I “needed an Advil for my period” because he realized he had annoyed me. Since this was my first experience with such sexist behavior at the store, I just stopped and stared at him in disbelief for a second before asking why he thought that was an appropriate comment. Gamers filled the bottom floor of the Seattle convention center for Geek Girl Con this month.

Running tournaments is tough: you have to understand the game’s complicated rules very well and make calls in tricky situations that are always going to leave at least one player unhappy. When I ran my first tournament, I learned the true extent of many Magic players’ disbelief that women know and understand the game. I found out from a coworker that while I was away from the counter for a moment, a player came up to ask if I really knew what I was doing. Another incident occurred during my first ruling: while I was giving the ruling and explaining the rules around it, one of the players in question started verifying my ruling using his phone. Use of phones is against tournament rules but I felt uncomfortable calling him out because I was worried about being seen as a jerk. The fact that I even had to worry about being seen as mean for enforcing the rules of the game—as the event runner!—is indicative of a larger problem within the community. There are constantly small moments like this: players ignored me when turning in their match results preferring instead to hand them to a male coworker who was uninvolved with the tournament, for example. These kinds of slights add up.

At Geek Girl Con, I spoke with Tifa Robles, founder of the Lady Planeswalkers Society, a group for women Magic players. Robles plays Magic competitively and worked for Wizards of the Coast on the Magic: the Gathering branding team. She has experienced the same things I have in the Magic scene, from being asked by guys if she actually knew how to play the game to men standing behind her playing backseat Magic—telling her what plays to make despite her extensive knowledge. Robles founded the Lady Planeswalkers Society in 2011 after some of her friends said that they were interested in learning to play Magic but they did not want to learn from their significant others and game stores were too unwelcoming or intimidating. The initial reception of the group by the Magic community at large was “really mixed,” says Robles. Some players were supportive, others said that it was “adorable” but that the group would ultimately fail. Some women told Robles that they thought the Lady Planeswalkers Society was not necessary and only contributed to the popular notion that women are not competitive by nature and cannot succeed in the competitive environments of Magic tournaments and events. Robles is concerned about her reputation as well as the group’s—she does not want to be viewed as someone who imagines sexist behavior where it does not exist or as someone who is creating a hostile environment, but what she’s doing is creating a group that will help everyone in the Magic community by teaching players who might otherwise never play the game. 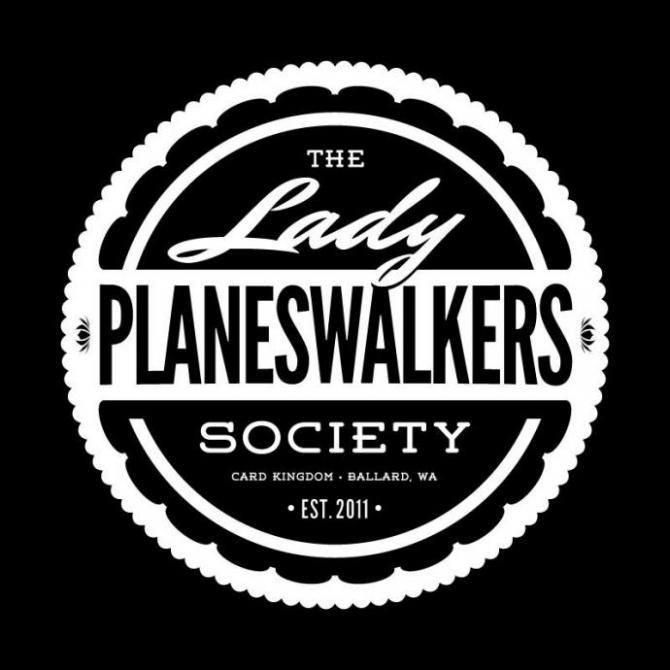 A lot of work goes into ensuring that the Lady Planeswalkers Society remains a safe space for everyone. Robles mentioned that when the group first started she used to take every potential member aside and explain the group’s intention and goals and then allow them to decide if they were willing to be a part of the group’s mission and act respectfully.  While it’s focused on and run by women, men are allowed to play with the group.

Liza Dadoly is writer and person of many talents. She last put together a psychobilly mixtape for Bitch. Photos by Sarah Mirk.

I am so sorry that dudes can be such jerks. I hope you keep playing and having fun. I just moved to portland what is the best FNM around PDX?