Meghan McCain posted the cleavage shot that launched a thousand tweets last night with this twitpic of her reading an Andy Warhol biography:

The photo, which she captioned with the line, my “spontaneous” night in is my Andy Warhol biography and takeout….I’m getting old caused a major freakout among her devoted Twitter followers and their pervy friends, with cries of “boobs!” and “slut!” and “boobs!” echoing throughout the Twitterverse. (Yes, I said Twitterverse. It’s a thing now.) So what’s a Blogette blogger to do?

This story, which we will call CleavageGate, is getting a few different reactions. They are:

1. McCain was just hanging out in her apartment in a tank top reading. So what if she posted a photo of it? Leave her alone!

Regardless of which camp you’re in, Meghan McCain herself is upset and has posted the following series of Tweets on the topic since CleavageGate broke last night around 8:00 pm:

so I took a fun picture not thinking anything about what I was wearing but apparently anything other than a pantsuit I am a slut, this is why I have been considering deleting my twitter account, what once was fun now just seems like a vessel for harassment

when I am alone in my apartment, I wear tank tops and sweat pants, I had no idea this makes me a “slut”, I can’t even tell you how hurt I am

ok I am getting the fuck off twitter, promise not to delete my account until I sleep on it, thank you for the nice words supporters

I do want to apologize to anyone that was offended by my twitpic, I have clearly made a huge mistake and am sorry 2 those that are offended.

Now, there is no way for us to know McCain’s real motives here. Maybe she was struggling with a bout of low self-esteem and felt like posting a sexy picture of herself online. Maybe she thought no one would care. Maybe she thought her bookworm friends out there would think it was cute. Regardless of the reasons behind the photo, it is NOT OKAY for people to call her a slut! When will the slut-shaming end? ENOUGH ALREADY! After all, the headline on Mediaite’s coverage of CleavageGate reads, “Will Meghan McCain’s Cleavage Cause Her to Leave Twitter?” No, you jerkstores! The slut-shaming as a result of her cleavage is what might cause her to leave Twitter! Somehow I doubt her actual cleavage has the agency to delete her account.

Of course, McCain is one savvy new media sister, so it’s tough to buy her argument that she was just taking a “fun picture not thinking anything.” She has over 60,000 followers on Twitter, and many of them are members of the GOP (not a boob-pic friendly crowd, that lot) so the reaction to CleavageGate shouldn’t come as that much of a shock here. Maybe the problem is that McCain aligns herself with the Republican Party (though methinks that if she were a democratic she’d still hear about how slutty she is from someone), but even so Twitter really can be a vessel of harassment, especially for a young woman with lots of influential followers. Which sucks. And even if it shouldn’t come as a shock that some people chose to react in a nasty way to this photo, that doesn’t mean it’s okay for so many anonymous creepos to call McCain a “boobtastic whore” and try to make her feel like shit about herself. Even allegedly “unbiased” news media like NY Daily News are saying things like “Initially, McCain tried to straight-talk her way out … Finally, she chose to just apologize, as if she has something to be sorry for.

The Twitterverse is a weird place, and lots of strange occurrences abound inside its virtual borders. Without the emphasis Twitter (and other new media) places on sharing everything that’s happening as it’s happening, whether you’re appearing on a talk show or eating takeout in your pajamas, McCain wouldn’t have felt compelled to share this pic in the first place. But our media landscape is what it is, and I didn’t hear anyone calling Tom DeLay a slut during this ass-shaking performance last week:

McCain is considering deleting her Twitter account because of all the nasty comments she’s received, and that is a damn shame. Though her posting of that photo might show her to be annoying, or to have bad taste in pajamas or books or Twitter etiquette, it doesn’t make her a slut. It’s just a photo, after all. And they’re just breasts. Get over it.

I agree--slut-shaming is totally inappropriate, but I was just surprised by McCain's surprise! How could she not expect THAT reaction to THAT photo? Makes me wonder if it was just publicity.

I know this will probably sound biased because of my Meghan McCain column in the Consumed issue but I think she honestly just made a mistake. She's only 24 which really is still quite young. You know how it is, you take a picture and you don't really look at it before you click send. I also don't think she had any idea how large her cleavage would appear or how bad the picture would look. My guess is that she just made a really big mistake and this is a hard lesson learned: You have to be careful of what you wear when you're in the public eye and when you're photographed.

...that 'slut' is a derogatory term deemed necessary for anyone prettier or more popular than you. To me, calling someone else a slut with no grounds whatsoever just shows me how insecure the name-caller is.

I would not have heard about any of this, had it not been for this article. By reporting on such absolute nonsense, you are participating in the ridiculous media hype surrounding this non-issue.

With all due respect, "Anonymous," I consider slut-shaming to be more than a "non-issue," and I do not consider a conversation on our current media culture to be "nonsense." Sorry if you feel otherwise.

slut-shaming (and the extreme gender bias surrounding it) is absolutely an issue that a feminist-response-to-media-and-culture-magazine *should* be reporting on. this story gives a (famous) name and face to what happens to millions of women all over the world. thanks, kelsey!
~tabitha~

FACT: Tank tops are also so informal that you don't necessarily go around thinking about how they portray your boobal regions. In fact, some of us are generally unaware enough of our boobal regions to not always be thinking about how they look to other folks. I've had photos or videos in which my Regions played an unexpectedly prominent role, as (I imagine) has anyone with Regions. But I'm not thinking about what they look like or whether they're OMGSOSEXYHOT at all times. Because they're just a part of my body.

I think about the lived experience of being in my body, and don't usually have a 100% correct idea of what that body looks like to people outside of it. I don't even know how images of me resonate with other people; I only know how they look to me, the person who lives in the body being portrayed. I genuinely do think that, when you're doing something as spontaneous as posting a photo to Twitter, and you're used to living in your specific body, you DON'T necessarily think about how people are going to eroticize or objectify or objectify-with-a-delightful-"how-dare-you-make-us-objectify-you"-twist those images. Which is why this whole thing makes me so irritated. There's an expectation that women are always thinking about how their bodies do look or should look to outsiders, and that when they slip up in either direction - shamefully un-hot, shamefully hot, whatever - they're open to judgment. Because HOW DARE YOU be at home and take a photo of yourself holding a book and not take every inch of your body and clothing into account with the same attention to detail and message that would be used when planning a spread for "Vogue?" HOW DARE YOU, really.

She posted a great response today on her Daily Beast blog (saying it's the last time she'll address "this non-scandal"). It's pretty awesome. The title says it all: <a href="http://www.thedailybeast.com/blogs-and-stories/2009-10-15/dont-call-me-a... call me a slut." </a>

From her article that you linked to:

"For years I have struggled to accept the fact that the way I look in a tank top comes off more 'sexual' than a flat-chested woman. And once again I was reassured by the media that someone with my cup size should always be covered up. Or what, I’ll be seen as a slut? It’s pathetic we can come so far in so many ways, but when Rep. Aaron Schock or Rep. Jeff Flake post pictures of themselves without their suits on—and their shirts, for that matter—they are proclaimed 'hotties.' But put me in a tank top and I am suddenly an embarrassment to the Republican Party and women everywhere. The double standard is infuriating."

I really don't have anything to add to this. Stick it to the man, Meghan!

Relevant: The Pleasure Dome: You Can Say Yes to Pornography and Accountability 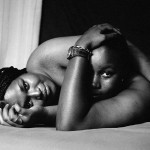