As a bit of a contrapositive to our weekly Adventures in Feministory, I have to include these 19th-century British political cartoons by John Leech that The Sexist linked to today. 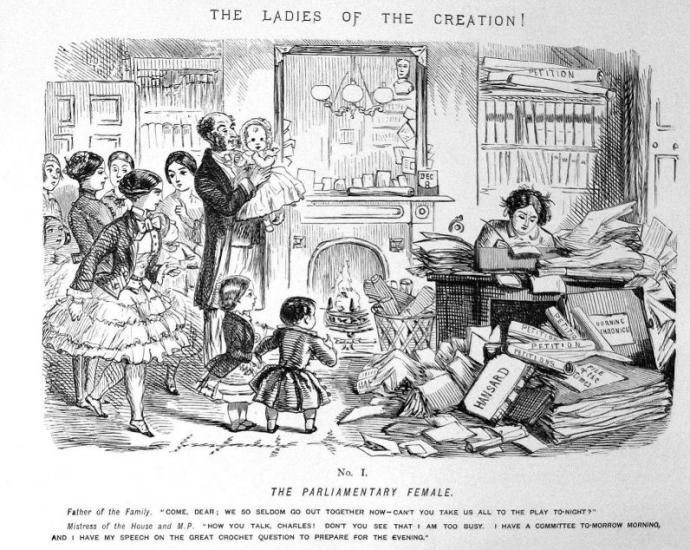 Father of the family: Come dear, we so seldom go out together now - can't you take us all to the play tonight?
Mistress of the house and M.P.: How you talk, Charles! Don't you see that I am too busy. I have a committee tomorrow morning and I have my speech on the great crochet question to prepare for the evening.

You can view hundreds of Leech's cartoons at an online archive, but the ones listed under "feminism" are the most entertaining. With "The Ladies of the Creation," Leech depicts the dystopic future of upper-class white women gaining rights - like wearing pants! (What's next? Female police officers?!)

Leech's cartoons seem so antiquated that they're almost awesome. Take for instance the descriptor "Strong-minded lady," or the dialogue in the following panel for a female coach-driver: "You are a very saucy, impudent young woman!" 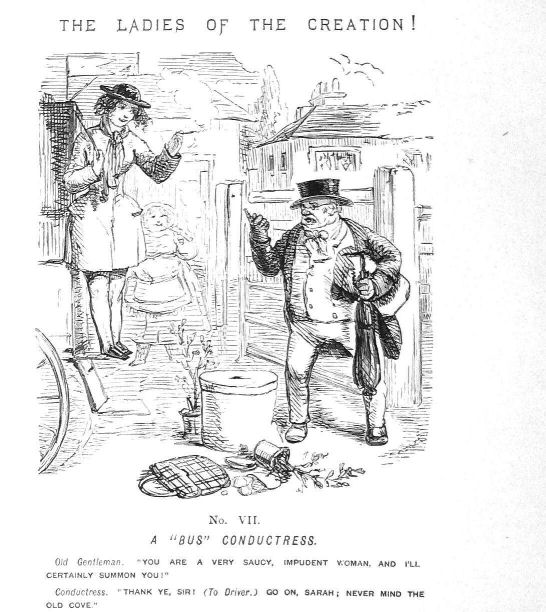 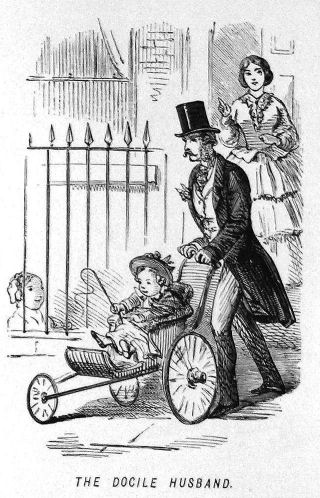 Leech's cartoons depict just a privileged sliver of the era's population, focusing on upper-class, white wife-husband relations and bloomer-sporting while slavery, indigenous displacement and colonization around the globe, unlivable urban environments, indentured servitude, and voting rights were also pretty major issues for women at the time. (You can browse "servants" and "social class," and while some of the olde-tyme humore is over my head, I'm pretty sure Leech is not expressing any progressive ideas.) And while it is fun to laugh now, let's not forget all the AskMen.com's out there still insisting that it's the natural order of things for men be the breadwinners and women go shopping.

Now how do I go about joining this awesome band.... 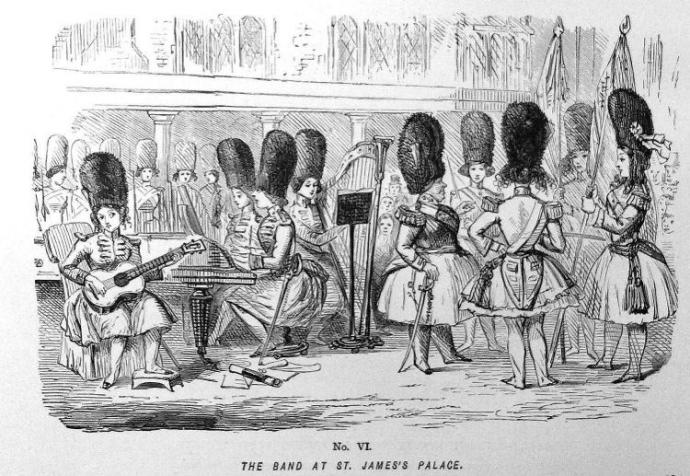 Women are always too busy working on answering The Great Crochet Question to take their families to the play. It's funny because it's true!

But seriously. These remind me of Married to the Sea [ www.marriedtothesea.com ] except authentic and unintentionally funny.

Aside: Any ideas what the Great Crochet Question could be? I'm flummoxed.

The girls in the "Parliamentary Female" one could sure teach modern girls a thing or two about how to look dashing. Menswear from the waist up, miniskirt from the waist down. Love it!

Father of the Family: But you are ALWAYS crocheting.

Mother of the House: Better that I do my hooking from home, than out on the street.

Evidently this guy hated women, especially in bloomers. While this is humorous now, it was sarcastic back in 1841, where despotic upper-class white men, either aristocratic or "self made" enjoyed exploiting women and treating them as second best.
Of course, they covered it all up elegantly by courteous gentlemanly gestures and polite talk. This period was overwhelmingly prudish and hypocritical at the same time. Thinking of it, how could they accept women in bloomers if covering the tables' legs was the norm?

I find it interesting how these cartoons were seen as humorous in the 19th century but today it is perfectly common to see a woman in a parliamentary position of government, or a gentleman taking his child for a walk in a carriage. These cartoons are almost ironic today because these things have happened against the artists (I'm sure at the time) beliefs. One could only imagine what the artist would have said should he have been able to see the future. Women have come a very long way from this fanciful image, it shows that we feminists are heading in the right direction.

Thank you for introducing me to this collection of cartoons!

Standing in the check-out line at the thrift store I observed the Mennonite family ahead of me.

The bearded patriarch, a male in his 40s?, was accompanied by a couple younguns' and several females, from granny aged to young teen.

They were Mennonites, not Amish, with our area having both sects present but since Mennonites own and drive cars/trucks we see them in this locally larger town/small city.

I noted the younger lady who I guess was in her late teens or perhaps early 20s.

She posses a, to me, incredibly cute face with an obviously lithe luscious
body despite being hidden in many ways by a non-tight intended-to-cover, full-length dress.

"Love" at first site? Well, "love" is so difficult to define!!! What IS love? There is no pointing at "love" as one can a physical object and proclaim that is a kitty cat, there's a chair, here is an Old Coot looking at a girl young enough to be his daughter with lustful thoughts that include marriage and fornication and possibly making babies but knowing that rationality and reality require him to merely take a few brief glances and appreciate such incredible cuteness and hope the incredibly cute young gal meets a decent young man and settles down to a wonderful long life with plenty of good luck and bountiful joy.

Yeah, something akin to that.

But, then, while purposely averting my gaze from the precious princess that drew my gaze as a super-powerful magnet draws small iron filings, our eyes met for a brief moment and she smiled at me, looked downwards, then looked back and another even larger smile appeared.

I smiled a small smile in return then averted my gaze.

So much was conveyed in that brief meeting of eyes!!!!

Did I actually detect interest in her gaze? With decades of life experience I have become rather proficient in deciphering body language and facial gestures; even having obtained one of my degrees in the subject of interpersonal communications.

Real-life experience and ample real experience. Upon that I believe my conclusion of that brief encounter has a high accuracy level.

I may have been, to her, "forbidden fruit." An outsider. Unapproachable yet a possible venue leading to freedom.

The Mennonite culture tends to admire its patriarchs to a certain extent and powerful males
are known to be a positive asset, with "power" being perceived in many ways, from social to physical and financial "power" along with other objective and subjective power definitions.

After an interlude of averting my gaze I "stole" another look at the LOVELY lass... one of the cutest gals I have seen in quite a spell, y'all!!!!!!!!!!!.

She turned her head from its forward-looking direction and returned her gaze to me. Again, our eyes met and the small flickers of smiles and overt apparent easily-noticed mutual interest was now obvious to me and I believe within the gal.

Not that any interest would be lasting or, even in different circumstances, lead to some May/December romance but such events DO happen, today and in the past.

It was not that many decades ago when teens were known to betroth men in their 40s and 50s and even older!!!!!!!

Well, after viewing the incredible loveliness of that gal I could understand what would compel, propel a man to desire such a beauty and betroth her.

Not that I would attempt such a deed.

So many reasons, an enormous amount, why even with the best intentions on my and her part even IF they were to occur would not develop into reality and be best for all concerned.

Again, we both broke the brief gaze, our mutual smiles obvious enjoyable to both of us, our eyes sharing so much, obviously pleasing both parties.

She may have looked again but I forced myself to divert my look in other directions.

Detecting movement in my peripheral view I briefly glanced to the side and saw the Mennonite family head out the door.

Again I quickly averted my view, settling for those few brief looks of what may have been the cutest gal I ever saw. Ever. If not the single most cutest of the cute she ranks up there so high that rankings are basically meaningless.

The lovely Mennonite gal was one of them.

Age, life experience and maturity along with ample self-awareness and being firmly rooted in reality makes it easy to appreciate the pleasure the moment provided even though I KNOW the moment was limited to brief glances.

Appreciate the fleeting moment though hoping the lass has a wonderful life as she goes her way and I go mine is socially and morally acceptable.

I wonder how many of the daffy dames, the brainwashed broads so typical of the female that I perceive as brainless tumors infesting USA society whose behaviors, attitudes and actions have led me to ascertain I am basically better off in most ways without a females involved in my life and that allowing a female to enter my domain could be an actual danger to me!!!!!!

From financial danger to other hazards, from false accusations to general \ illogical and irrational behaviors and actions performed by USA females I believe that for me and perhaps even the majority of males that a life lived without females is the logical life to lead; what with what our society has evolved (devolved?) into.

Oh!!!!!!!! Past experience has shown me the "feminists" and those believing "modern females" are oh so wonderful would sure commence spewing their knee-jerk rhetoric by now, labeling me with the same old TRITE babblings tossed out with obviously no actual rational thought!!!!

"You are obviously gay!!!!" the non-thinking emotion-laden hussies will spew/write.

Sorry, girls. My thought-out rational beliefs to shun YOU are not based upon a desire for males.

Go grab a fur faced feline for companionship. You will not get your talons upon me. Nor many other males according to what I have read. You "modern" females simply possess too many negative traits to overcome the too few positive attributes that sloooowly ooze out of your materialistic self-centered psyches.

Toss out your knee-jerk rhetoric devoid, typically, of self-created thoughts.

Spew and babble and gurgle that relentless drivel that has grown so tiresome and merely proves to me how accurate my conclusions about USA females are in general.

No, not EVERY single female. Surely there are a minute amount of females who have, for whatever reason(s) evaded the socialization/acculturation that has created today's "modern" sub-par undesirable to-be-avoided female.

However, finding one of those "rare breeds" is difficult and, sadly, the apparently normal female today can quickly convert into the mentally-diseased harpy tomorrow, thus ruining yet another man's life.

No thanks. Females are simply too dangerous and USA society has "empowered" through many various mechanisms females to the point that a sane male has but one route to safety in life................

shun all females to the greatest extent possible.

I suggest/advise that females desiring/needing companionship but unable to find it do themselves a favor... adopt a kitty from the local animal shelter.