I was back in Minneapolis this weekend for the National Conference for Media Reform, an event organized by the folks at Free Press, a nonpartisan group focused on media reform and policy.

I’ve had conflicted feelings about the conference since it started in 2003. Actually, back when it first started, I wasn’t so much conflicted as just pissed off. A lot of us were pissed.  I was living in Madison then, which was the site chosen for the first conference. Many of us were part of a vibrant and active independent/grassroots media community that included, among many other projects and efforts, a radical community newspaper, an active Indymedia center, and a long-running community radio station. What pissed us off is that although the conference was to be held in Madison, none of us local independent media creators/media justice organizers were included in the planning. Actually, we weren’t even alerted that the conference organizing was taking place. It was beyond ridiculous; it was offensive. How could an event focused on media reform blatantly ignore the folks who were a critical part of that work, even if our focus was different?

What made the situation more frustrating to me is that at the time, I was in somewhat regular contact with two of the founders of Free Press – Bob McChesney and John Nichols. I’d turned to Bob for assistance in designing an independent study course on media criticism (I was taking courses at the University of Wisconsin-Madison, where he’d taught years earlier but was allegedly ousted for being too radical; he now teaches at the University of Illinois at Champaign-Urbana), and he kindly provided some much-needed guidance and mentorship. He’d also allowed us at the Madison Insurgent to reprint some of his articles on media conglomeration. John had kindly assisted those of us involved in the unionizing effort at Whole Foods by writing op-eds for the local paper, and helping us get the word out about our struggles.

In other words, the founders/organizers of the conference were well aware that there were active local independent media projects, yet didn’t make a single effort at reaching out to any of us. In fact some of us tried to reach out to them, but our calls and emails were not returned. It was infuriating, to put it mildly.

In response, a radical contingent of Madison independent media producers/media justice activists organized a shadow conference that, from all accounts was very successful (I was unable to make it because by the time the conference came around, I’d already moved to Oakland).

Two years later, the conference moved to St. Louis, and it was clear that efforts were at least being made to be more inclusive. For one thing, Free Press offered scholarships to those of us who otherwise wouldn’t be able to attend. I was grateful for the opportunity the scholarship provided, to meet lots of folks doing great grassroots work, and reconnect with old allies/comrades. But my overwhelming reaction (and the one of countless other radical media folks I talked to) was one of frustration at the extent to which media reformers still didn’t seem to notice (let alone value) those of us creating media, and/or those of us who incorporate a media justice ethic into our work. It was frightening to see how many people think policy and lobbying is the only way to effect change. It was frightening to see the absence of challenging deeply systemic power structures. It didn’t feel like movement-building. It felt like a lot of disconnected policy talk, a lot of strategizing about organizing through the usual channels (without an examination of the structures that produce and replicate systems of oppression), and a painful absence of creativity and misunderstanding (or outright refusal to consider?) democracy and media justice.

So I knew what I was getting into this year, but wanted to give it another shot. And overall, I’m glad I did. Over 3,000 people attended. Again I thank Free Press for offering scholarships to those of us who otherwise wouldn’t be able to attend. I met many new folks, learned about some exciting organizing going on, reconnected with people working on some incredible projects (like the Center for Media Justice, the Prometheus Radio Project, Youth Outlook, and People’s Production House), and at the end of one long day, was even lucky enough to visit two of my favorite Minneapolis night spots (The Brass Rail and The Saloon), where I got some much-needed kindness by a loving contingent of Minnesota Nice homos and fags (thanks, all of you, for being as sweet as you always have been).

But. When I registered and opened this year’s conference packet, I read the welcome letter, the opening line of which is, “We are here because the media’s failure to inform and represent our communities poses one of the greatest threats to our democracy.”

Our “democracy”? Call me nitpicky, but my definition of democracy means that people actually have power. Moreover, or more specific to this conference, considering the ongoing criticisms of media justice activists and media producers that they don’t feel included, it seems all the more strange to use such loaded language.

I missed last year’s conference in Memphis, but I talked to a number of folks who said they felt things had actually regressed this year, and they were openly questioning whether they would continue to return.

It also replicates the same cult of personality/power that we as progressives/radicals claim to resist. With all due respect, how many times do we need to put folks like Amy Goodman, Bill Moyers, Phil Donahue, and now Dan Rather on a platform? I understand the need to lure folks in, but if that’s what it takes, we have more work to do, most notably in the areas of listening to other people’s stories and opening up doors and spaces.

I’m still on the fence about my future involvement, but I do want to end on a positive note, because I experienced many inspiring and refueling moments over the weekend. Things like:

I also attended both this conference, as well as the first one in Madison. I was there as a blogger this time, so I suppose I was looking at the whole process much more critically this time around. In any case, I was thinking the same thing about well...everything you wrote. This conference has sort of lost its...point? It's the same presenters (the big names, anyway) saying the same things to the same people. And yet, for the most part, nothing is changing. Very frustrating.

I'm not sure if I can stand to listen to John Nichols say the same things once AGAIN in a few years. And yet, he continues to be somewhat smug and self-righteous, though I'm not sure he's really earned that right.

<p>Funny, too, speaking of the same people saying the same things... and also thoughtless things... in Bill Moyers' keynote speech, he quoted (former Independent Press Association director) Richard Landry explaining how vibrant the independent media movement is. Apparently Bill didn't do his research (or someone did it for him?) because Richard Landry has been widely criticized for bringing down the Independent Press Association, the organization that existed to support/promote the independent publishing movement. There's nothing like praising someone who basically took countless beloved and needed independent publications under (e.g., Clamor, Punk Planet, Kitchen Sink, LiP).

Had I known there was going to be Bitch mag representation at the National Conference for Media Reform, I would have made more of a point of going. I had the opportunity to go for work and well I just downright couldn't be bothered. Partly because this past weekend was the kick off of pride in DC, partly because I love my weekends, and partly because I was afraid the conference would be first a bit boring, and second full of self-important dude-centric Democrat (with capital D) bloggers, and well, policy wonks...not to generalize of course.

All that being said, I, too, would have been going as a represntative of one of those policy changing wonky focused organizations that only occasionally supports alternative sources of media and puts money towards changing policy around media consolidation, ownership, access all that. And yes, I would have also been wearing a suit.

After just over a year at my job, I have learned much about media reform, primarily from the policy side. So I appreciate your perspective on these really important issues. I take my alternative/independent media sources for granted too often, so reminders that we must work on these issues from all sides is always good.

As for the conference (which I did not attend), it seems like any liberal (use this word purposefully) conference, or movement even, centered around a certain issue, this one wasn't as radical as some of us might have liked. It's a struggle. I find it difficult with my day job because it's folks who are doing good work, but it's within systems already set up that, you know, aren't the best. (ie racist, sexist, classist, elitist/inaccessible in so many different ways). It's the age-old social justice struggle of integration (in the system, out of the system, what is the system anyways?) that has and will continue to shape my activism. In the meantime, I will stick with my job and the work we do because, well, pay checks are awesome, but I will continue to turn to my alternative/independent media sources and journalists for snarky perspective and, of course, pertinent information.

just one more thing to share with folks from the Women's Media Center...

now, i have my own evolving relationship with folks like gloria steinem and ellie smeal, and i'm not quite the hillary clinton supporter that they wish i could have been. plus i don't konw that much about WMC, but this little video they've put together is worth a look-see. (if you aren't down with the petition signing and what not, the comments on the WMC blog are also worth reading)

maybe someone else (debbie) who's more familiar with WMC and/or other orgs like it can shed some light? were they at the NCMR?

and i've said it once, and i'll say it a million more times, chris matthews REALLY needs a time out. add tucker carlson to that list also.

and see if you can count the people of color. betcha can on one hand.

I'd seen the video and actually considered posting it on our blog, but hesitated for two reasons: first, the music between segments seemed so... ridiculous? overdone? And second, I don't know much about the Women's Media Center (I think they're quite new), but their tagline, "Making the female half of the world visible and powerful in the media" smacks of essentialism to me, which makes me skeptical of their work. And yes, considering folks like Gloria Steinem are heavily involved, I'm even more skeptical because I find much of her political analysis simplistic and offensive.

That said, I think the content of the video was great.

And I do know that the WMC offers trainings for progressive individuals/organizations that teach them to speak more articulately to the media, and I think that's a critical and valuable service.

This is Ellen from NCMR. I was reading your blog and wanted to say hello. You and those nice guys from Canada were a blast to hang with and I really wanted to keep in touch, but I didn't get your email address or anything! Shoot me an email if you have a minute! ellen.salone[at]loop.colum.edu

Relevant: The Pleasure Dome: On Nonmonogamy and Casual Sex 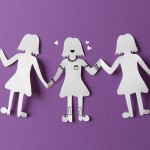 by adrienne maree brown
With time, I’ve learned that under the layers of socialization—and jealousy—there’s deeper wiring that says yes to one, or yes to two, or yes to many.