I was recently laid off from my job, which I know doesn’t make me that special. It wasn’t one I liked, it was one I had sort of grown to hate and I was already noodling around looking for another job anyway, but actually getting the axe totally threw me for a loop. I had been saving my pennies anyway on the advice of a friend who told me to save so I could quit if it got really bad, so I’m not (yet) totally in dire straits financially.

But… I am slowly going out of my mind being out of work. At first, I still got up in the mornings and showered and dressed, applied for jobs and sent the networking emails like you’re supposed to, stayed in when I wasn’t networking to save money. Meanwhile, some of my friends celebrated their “funemployment” for what seemed like forever, sleeping in and going out drinking and whatnot. Weeks later, we’re all still unemployed even though I was being all responsible, but I feel like a slobby shut-in and I sort of hate them. And obviously I hate applying for jobs and getting rejected and sitting around in my jammies all day is just deadening. What do I do? How do I get out of this rut?

I think you just described me and my life in about April 2010. I think everyone who loses their job, even the ones who call it “funemployment” and drink their way through the initial shock, hit the rut you’re talking about at some point in the process. I mean, unemployment’s not fun, it’s a little demoralizing, it’s repetitive and it rarely feels like you’ve accomplished anything at the end of a day.

In that way, it’s sort of just like a shitty job. Which, I think, might be the most healthy way to conceive of it.

If you’re unemployed, looking for employment is your job (explicitly so, in fact, if you’re receiving unemployment benefits). It’s not a fun job, it’s not one you really need a college degree for, it’s repetitive and a little sad and the sort of job you just want to leave as soon as you can possibly find a better one. Unlike doing a paid job, though, the only way to find a better job is to actually keep doing the one you don’t like, as good as you can possibly do it.

But I know that knowing there’s maybe a light at the end of the dead-end job tunnel isn’t going to cheer you up every day. I’m going to assume, for argument’s sake, that you’ve had a friend or two look over your résumé and a sample cover letter, talked to your alma mater’s career center (if you’re so inclined) and workshopped your interview skills with some friends, but it’s the day-to-day of unemployment that’s getting you down. (If you haven’t done those things, totally do those things. I can’t tell you how many typos I’ve found or have been found in my résumés that undoubtedly had a recruiter face-palming.)

So here are some things I’ve done in your situation, or my friends have done, to make the process of job-hunting and the daily grind of unemployment seem less awful.

Personally, I’m a big fan of lists. Part of this stems from my need to feel like I’ve accomplished something, especially if I’m feeling depressed or sliding into a depression – when I make a list and cross something off, I feel a sense of having done something useful. It’s also a useful way to order my time, to give myself a break and to give myself the joy of rebelling against something by procrastinating, even if it’s just procrastinating on myself. So make a list of your daily tasks (like, “Apply for 5 jobs” and “Send two networking emails”), then allow yourself breaks between tasks to do unrelated things – I reward myself with coffee in the morning, for instance, but never before I’ve accomplished one concrete task.

Make a point of leaving the house every day, even if it’s just to take a walk – but also look around your community for free things to do, like a local museum or a hiking trail or live music in a coffee shop. Yes, in a lot of places having a social life revolves around paid activities (restaurant dinners or drinking, for instance), but it’s not hard to convince even an employed friend to see a free movie screening or a local art exhibit instead of hitting the Applebee’s again.

Next up, try volunteering: especially if you have time during the days – those résumés can go out at 9 pm as easily as 9 am – you could read to children at a local library, serve meals at a soup kitchen, clean poop at an animal shelter, head to a senior center, or bag groceries at a food pantry, for instance. For one, it’s a great way to fill a résumé when there are unemployment gaps, but it’s also a great way to get out of the house, help people who need it and just generally get out from inside your own head. It’s also, notably, nominally free (less transportation costs if you can’t walk to it).

And, if you need money, don’t be afraid to try to get a steady paycheck doing something you don’t find as meaningful. It may mean reorganizing your résumé to leave off an academic credential or focusing on the menial tasks of your last few jobs, but even answering the phone at a local hair salon or going out on temp assignments will bring some money in, leave you time and emotional energy to continue your long-term employment hunt and get you out of the house and your own head. As long at the people are nice and the paycheck’s regular, it might help you stop feeling like a slobby shut-in because you literally won’t be anymore.

And, finally, keep talking yourself down every time unemployment seems like an insurmountable challenge. It’s very easy – as reflected by national statistics that show the labor market participation rate has gone down over the course of the economic downturn – to get discouraged, to blame yourself and to beat yourself up about being unemployed. But all those things will do is help you stay unemployed. You simply don’t have much control over who hires you and when, and all you can do is put your best (often written) foot forward. But learn to not take the rejection personally – like an OkCupid person who doesn’t write back or a cutie who doesn’t smile back at you from across the bar, potential employers don’t know you as a person, so they’re not making decisions about you as a person. Not getting this job or that job is no reflection on your innate value as a person, let alone as an employee.

And, so it doesn’t go without saying, make sure that your “rut” isn’t any more than just feeling a bit down. If you have trouble getting out of it, or have other symptoms, get screened for depression. Unemployment can be a trigger for some people, and you may need more help than just some suggestions of how to get out of the house. If you are using COBRA, it might be covered by your health insurance but, if not, most communities have some provisions for low- and no-cost mental health services for which you might qualify. (I hesitate to give specific suggestions here, as I don’t know your community, but Google is your friend here.) And even if neither of those is an option, untreated depression isn’t something you should suffer through without help, and getting help with it might be well worth a few dings to your emergency fund (and that help might help your job hunt as well).

Although I appreciate the extent to which Ms. Opinionated discusses how unemployment in this economy is not an individual failure, I do think there are some ways in which people (and especially left-leaning readers of this publication) might attempt to do unemployment differently. First, it's important to note that the declining rate in unemployment largely masks the extent to which people are having to take part-time jobs (thereby trading unemployment for the only marginally better under-employment), as well as obscuring many of the long-term unemployed who are dropping out of the labor market all together. Second, instead of just volunteering at an animal shelter, which of course might be fun, why not attempt to join- or heck, even start- a social movement that agitates against the conditions that led to mass unemployment in the first place. That way you might have an outlet for venting of your frustrations, be able to make some personal connections, and maybe even change the world a little bit while you're at it. Third, there are some more subversive individual options to be considered as well, like dumpster diving and free markets.

this comment is some good words. some good truths.

My unemployment was miserable for my already clinically depressed mind. I was rejected a million times when applying. Volunteering saved me, and also led me to a new career that suits me much better! 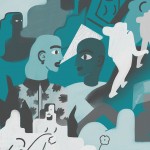 by Leah Lakshmi Piepzna-Samarasinha
Imagine if we were respected for our care labor, but also allowed to be more than our care labor.