Ok, I know this is going to sound like a trivial thing, but it really doesn’t feel like it to me. I won one of those drop-your-card-win-a-pizza contests last week, and the deal is that they’ll deliver one pizza and give me 20 percent off the rest of my order. Now, that would be great but: I don’t live in their delivery zone, and it’s only good at lunch anyway, which means I have to have it delivered to the office. I obviously feel like a terrible person hogging a pizza to myself, but there are 8 people in my office, and that’s way more people than can split one pizza. I can’t afford to buy pizzas for everyone at 20 percent off, either – and, to be honest, I’m really trying to save money and pay off some debts, so I’m too broke to look this particular gift horse in the mouth.

So, what do I do? My preference would be to just split it with the two people I’m friendly with in the office and swear them to secrecy that it’s free, but we never order pizza so people would notice. On the other hand, if I was honest, the other folks could get 20 percent off their lunches (or another pizza), but they’d probably be snippy and I know one of them would suggest that we all just split one big order (including my free pizza) and thus I’d end up paying for my free lunch. And on the third hand, both of the women who I know would be snotty have a tendency to take a ton of days off, which means I end up doing a lot of their work (which irks me to no end), but they are also the people most likely to be in the same financial situation as me because they are single moms.

Like I said, I know it sounds like a trivial thing, but I’m so tied up in knots I haven’t even called the place back yet.

Guess there really is no free lunch?

I think you have lots of company in that: women especially (but not exclusively) are taught to be pleasers, to try to make everyone happy, to be liked – often to the sublimation of their own wants and needs. And if you’re in a place where you’re tying yourself into knots trying to figure out how to make everyone in your office – let alone the rest of your life – happy, then you’re already way far down the path to substituting everyone else’s feelings for your own needs and wants.

Not that making other people happy isn’t good, or that sharing the pizza wealth might not make you more happy than eating pizza for three meals straight. If sharing a free pizza with your friends at the office makes you happier than eating free leftovers, budgetary restraints or not, than share it with your friends. If sharing the discount makes you the happiest despite the remarks, offer to let them use it. But currently, you’ve dumped eight peoples’ supposed expectations on this particular pie, and it’s weighing it down – and, let’s be frank, if you do this over a pizza, you do this over everything.

So, take a step back, and stop yourself from trying to figure our what the “appropriate” thing is, and what other people will want, and what they’ll say if they don’t get everything they could possibly ask from you. Ask yourself, in a vacuum, what you want: a small pizza party with your friends, a few free meals that won’t stress your budget, or an office-wide pizza day.

Think of it as practice for real life: the stakes here are really low (a few dollars, some office side-eye, a couple of cutting remarks, some cheese-y, sauce-y deliciousness), so no matter what you decide, you’re not out much in any direction. But it’s important practice because I’m sure you probably do the same thing when the stakes are higher, and that’s not the healthiest place for you to be.

If you really want to include your co-workers who face similar budgetary constraints, but with whom you aren’t as friendly, in your good fortune, try actually talking to them: it may be that they don’t order out, or won’t be in the office that day, or don’t care for or can’t eat pizza. You don’t have to be very specific about what you personally won, but perhaps you can say, “You know those fishbowls in take-out places where you can win a discounted office lunch? Well, I finally won one and I’m trying to coordinate a day where those who want to can use it. It’s 20 percent off and here’s the menu, so if you’re interested just let me know a couple good days next week, and I’ll pick the best one for as many people. place the order and collect the money and take care of everything.” That way, if you and your buds go in on the free pizza, there’s no obviousness to who paid what and the others get to choose to use the discount or not.

But if you’re just trying to figure out a way to please them because they’ll make a comment about it, rethink what you’re doing. People are going to make comments, they’re going to misinterpret your actions, they’re going to pick other friends or like other people more. There will be – I know, believe me – people who just do not like you, and there will be absolutely nothing you can do or say to change that, no matter how nice you are or how much out of your way you go.

That doesn’t give you carte blanche to be a jerk to those people, and it doesn’t mean that there’s no reason to be courteous and thoughtful, or that they don’t deserve apologies when you aren’t nice. But it does mean that you have to strike a better balance between being courteous and thoughtful to people with whom you aren’t close and shaping your life and decisions around everyone else’s preferences.

(And, as a side note, if your coworkers’ frequent absences mean you get stuck doing their work so often that it comes up in conversations like this as an aside, it is probably time to sit down with your boss, point out as quantitatively as possible how much extra work comes your way because of those absences and figure out a more equitable work-sharing or work-covering arrangement, or something involving a raise or comp time. It’s really easy to pick up other people’s slack, and easy for a harried supervisor to miss that you’re doing it, but if it’s stressing you out as much as it is, it’s time to bring it up privately with her or him.)

This was totally boring.

I thought this article was a great examination of the way our society's compulsory perfectionism can cause a lot of anxiety. I definitely have been in situations like this before, and I wish I had someone tell me to stop trying to please everyone.

Your comment is precisely the kind of snide negging that the writer is worried about, but somehow I don't think anyone who reads it will take you seriously.

I want to know what pizza-girl ended up doing. 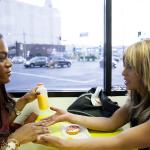