Ms. Opinionated: How Do I Win an Argument About the Wage Gap? | Bitch Media

Ms. Opinionated: How Do I Win an Argument About the Wage Gap?

I constantly find myself putting forth the argument that men get paid more for the same job as women—and although I have research, I still find that people, even women, tell me that I’m wrong and that the Census bureau takes all jobs into account and blah blah blah. I know men get paid more for the same jobs as women, even in management positions, and I’m tired of people saying that my perspective of trying to change this is unrealistic. I even had a woman say she was sorry that “I felt discriminated against.” How can I effectively get my point across that women are not treated equally without seeming like a hormonal driven woman?

Yours truly,
Annoyed at “Man”kind.

This past April, every single Republican in the Senate voted against a bill called the Paycheck Fairness Act, which would require the Department of Labor to break down collected wage data by both gender and race, require employers to have concrete reasons to value one worker over another, and keep employers from retaliating against workers who discover that they are paid less than colleagues in the same positions. By further closing the wage gap, the passage of this bill had the potential to create a huge economic stimulus. This was the third time that the Paycheck Fairness Act had been put to a Senate vote, and the third time it had failed. Simply put, the Republican senators who voted against it—which, again, was all of them—would rather see women remain second-class citizens than see a boost in the economy. 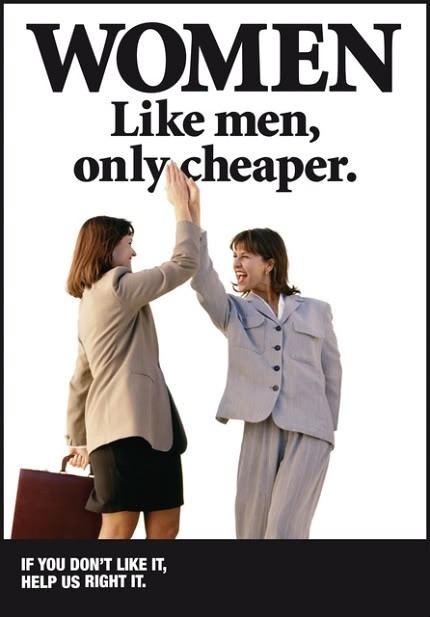 There is no question that there is a wage gap, just as there is no question that women still work more low-income jobs than men and, at the other end of the scale, lag behind in promotions in high-paying jobs. Furthermore, there is plenty of data available to disprove the most commonly held positions of your average wage-gap denier—that men enter more high-paying positions than women do, and that women want more flexibility in the workplace (you know, because babies!) and therefore the wages they lose in the process are their own business, not the government’s. If you find yourself regularly tongue-tied by arguing that there absolutely, positively is a gendered wage gap, I suggest simply printing out or bookmarking collections of data like this to whip out when you feel overwhelmed and frustrated by arguing.

Here’s the thing, though: Generally, people who argue that there isn’t a wage gap, or that women never ever get treated unequally at work, are trying to make a larger point. They’re trying to argue that sexism and discrimination don’t exist, that if they do exist women shouldn’t speak up about them, or that it makes them very uncomfortable to have to discuss either of these things. The woman who told you she was sorry you felt discriminated against, for instance, may indeed be one of the rare woman who has sailed through the employment market without a hitch. She doesn’t want to talk about entrenched, institutional discrimination because she doesn’t want to admit that she’s lucky or privileged or both. In a situation like this, it might be helpful to take a breath and say something like, “You know, I’m glad your experience in the workplace has been so positive, and that you’ve never experienced discrimination. But your personal experience doesn’t negate a much larger problem, and it’s awfully arrogant to suggest that it does.” And then open up your graphs and ask sweetly if she’d like to see them. She probably won’t. Because again, her need to tell you you’re wrong isn’t about you—it’s about her.

Arguing with anyone can be exhausting and demoralizing, but arguing with people whose worldview depends on you being wrong is especially difficult. With that in mind, here are a few tips, most of which aren’t specific to an argument about the wage gap, but rather geared toward an argument of any kind with someone with whom you fundamentally disagree on political issues.

• Sound as neutral as possible. I’m the first person to admit that this is a million times easier said than done. When you’re passionate about something, it shows, and you are clearly passionate about setting the record straight on this issue—which, as you note, carries the risk of making others see you as a “hormonal driven woman,” and carries the further risk of everything smart you have to say flying out of your head because you can’t believe you have to argue with these ding-dongs. So: Deep breaths. Lots of them. Keep your voice level and dispassionate—not patronizing, not combative. It’s not necessarily right, but we’re more likely to see the person who’s keeping their cool as the one who is correct. But you’ll also feel more in control if you keep a clear head. It may help to pretend you’re talking to an inanimate object, rather than an actual person who is pissing you off.

• Know the opposition. You’ll want to be able to shoot down wage-gap denials with facts, so if this indeed is an argument you regularly find yourself in, make sure you have both the truths and the myths down. There are great cheat sheets out there, so get familiar with them. It’s also good to be able to contextualize wage-gap denial as a key tenet of antifeminist thought more generally. (Although reliable old bag of laughs Phyllis Schlafly acknowledged that there is a wage gap when she proposed that it be made even bigger.) For instance, if your friend Miss I’m-Sorry-You-Feel-Discriminated-Against points out that one of the most vocal wage-gap deniers out there is a woman, you’ll want to be able to volley back with the fact that said woman is part of an antifeminist think tank funded by the ultraconservative Koch brothers, which—among other things—denies climate change, opposes affirmative action, Title IX, and the Violence Against Women act.

• Understand that arguing may not be the best use of your time. However important this issue is to you, there are plenty of people who, for whatever reason, are never going to believe that such a thing as a gendered wage gap is real and deserves their attention. They want to argue with you not because they’re open to having their minds changed, but because they want to see you get all flustered and feel smug about how “emotional” you get. (See point one.) You are not required to spend your time trying to convince others of something they’re dead set against accepting. The entire culture of American politics is becoming one of people just shouting past each other, and nobody learning anything because it’s all so jerky and frustrating. So while sometimes it may feel fantastic to come to an argument fully prepared and then crush your opponent, it’s not your job to do so. The next time someone starts to argue with you in bad faith, feel free to simply turn the question back on them and say, “I could show you a bunch of evidence that a gendered wage gap does exist, but I’m curious: Why are you so invested in the idea that it doesn’t?”

thank you so much for this article...you have no idea how many arguments i have with morons who pretend opression and wage gaps do not exist...i need to learn to apprear can and dispassionate, because usually i get so angry...