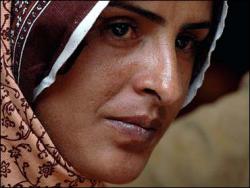 Many of you have heard of Mukhtar Mai, a Pakistani woman who was
gang raped in 2002 as revenge for an honor crime, an act that was
authorized by her village elders.  Mukhtar spoke out about the crime and
prosecuted her attackers - and won.  That is, until an appeals
court overturned the convictions.  Mukhtar has been waging a legal battle
in Pakistan in the years since, and, as a result, her safety has been
constantly in jeopardy.  Despite that, she started the Mukhtar Mai
Women’s Welfare Organization to help support and education Pakistani
women and girls, and has been an outspoken advocate for women’s
rights.

Her story was included in the 2006 documentary Land, Gold and Women.  Now her story will be the subject of a feature film, too.  However, she still hasn’t gotten justice in her legal battle.

Variety reports that Jay Roach (suprisingly enough, the very same Jay Roach who produced Borat, Meet the Parents and Austin Powers) and Jennifer Perini are producing a big screen adaptation of Mukhtar’s story.  In addition to the really great news that this film is being made, it looks like Katia Lund will be writing and directing it.  Katia Lund was the co-director of 2002’s City of God (and was snubbed for an Academy Award nomination as co-director that year).  This film will likely only show up on a few screens across the country, but it’s very exciting news that it’s in development (and being covered in Variety).

Yet, we’re still waiting for Mukhtar to get the justice she deserves.  On Friday, Vital Voices posted an update on Mukhtar, and noted that her case may finally be heard by the Pakistan Supreme Court in the coming days.  Mukhtar held a press conference on Friday about the pressure she’s receiving from the government to withdraw her charges.  Vital Voices has a call to action about this, and is looking for folks to write the Pakistani Ambassador to the United States in support of a fair trial.

We will soon have an opportunity to support a woman writer and filmmaker with a very important film, but right now we can support Mukhtar Mai.

I don't know if there is justice for a heinous act like that. Poor lady - but way to keep on going.

The story of this woman is worth being watched and heard for hundred times. She's one of those who proved that one woman can change the world.
And of course, I can't stop admire Mai when I found that she became a kind of Rosa Parks of Pakistan.
"First there was just my home. Now I have to deal with the whole world"
"I do feel that if I stop now or step back it will harm a lot of women. Mai said. "So, I have to keep going and keep helping others."