We've already established that we're fans of Little Jackie 'round these parts, but we've never singled the Brooklyn duo out for adoration. Remember how excited we all (er…I hope it wasn't just me…) were when Jay-Z informed the planet that “ladies is pimps, too”? Imagine an entire album of lyrics like that, but better, sung by a lady, surrounded on all sides by a slinky R&B voice and bouncy, brassy soul instrumentation, and you're imagining something pretty close to Made4TV, the 2011 (and, sadly, most recent) album by singer and songwriter Imani Coppola and producer Adam Pallin. Now, to gently break it to Jay that there's a new sheriff in brushing-shoulders-off-town? The description of Coppola's writing process and inspiration provided on Little Jackie's bandcamp page is a perfect introduction to her style as a songwriter:

If one listens closely to the lyrics of Little Jackie, one can almost feel Imani Coppola scribbling desperately in the dark at 4 a.m., awoken if she ever slept at all, to put the stirrings of her soul to paper, to capture the bitter mix of anger and hope and humor one feels when contemplating the challenges of life and, especially, love. Put to Adam Pallin's whimsical programmed tracks, the life-is-hell lyrics sound light and positive. Maybe it will be OK after all. Together, the words and throwback-to-Motown instrumentals juxtapose to offer a joyful cathartic release of the evil that lurks, the kind of evil good music can cure, if only for 3:33.

I'm not gonna say anyone is wrong, here, but part of what I love about Little Jackie's lyrics is that they themselves aren't all heartbreak and hurtin'–it's not only the doo-wop-laced backing tracks keeping Made4TV from being a Winehouse-ian paean to self-destruction and a worldview through tinted windows. There's internal conflict, sure–to go out and risk falling for someone shitty at a club, OR to stay home and masturbate?–but there's also a deep-seated sense of self-awareness and respect (I know about myself that I need at least two dozen simultaneous boyfriends to be satisfied, and I think that's GREAT!). Coppola writes about having fun, having sex, getting into love, getting out of love, and taking care of herself every step of the way.

She comes by getting hard knocks and moving forward honestly: Little Jackie is actually Coppola's second musical project, as she had a brief stint with MTV-flavored fame in 1997 with a solo album and successful pop single, “Legacy of a Cowgirl.” Her label dropped her shortly after, though, and she spent the next decade releasing albums independently before Little Jackie's first album, 2008's The Stoop.

There isn't a song on Made4TV I don't recommend heartily, but “Independently Mine” seems to explain most clearly Coppola's mindset in returning to mainstream-ish music with Little Jackie:

It's always good news when an artist burned by their 15 minutes of fame decides to cobble their own path in the same industry, and Little Jackie gets one million bonus points for using sex-positivity, healthy body image, and feminism as building blocks on the way. Check out the official video to “31 Flavors,” the song mentioned earlier re: several dozen lovers, below, and let us know what you think in the comments!

Love it! It's cheeky and fun, and that voice! Definitely going to give their other tracks a listen.

What a rich voice! Clever lyricism and a buttery sound to go with. Love it! 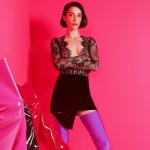