Music Matters: Your Department of New Rock and Sweeping Declarations

The big exciting announcement in music this week was supposedly that iTunes now has the Beatles catalogue. Well, in news that may shock some of you–I was A. unaware that they didn’t already, as I’d never looked for it, and B. unconcerned, as I don’t actually like the Beatles.

Now, I know that someone’s stopped right there and gone to write me a comment detailing the many ways in which I am Horribly Wrong to not like the Beatles. So let me clarify a few things, because there’s little I hate more in pop culture discussions than people trying to talk me into liking things that I just don’t.

I understand that the Beatles are incredibly important to the history of rock ‘n’ roll. Hell, Ringo produced T. Rex, without whom I would not be who I am! (That was a joke. Partly.) But I never get the urge to sit down and listen to the Beatles. I am an Elvis/Stones girl, and yes I know that the Beatles had far better gender politics (well, sorta) than Elvis or Mick Jagger. But the heart wants what the heart wants.

My taste in rock runs toward the hard, loud, grinding and fast, or deep and spooky, or country-tinged. My dad raised me on Elvis, and I came of musical age as hair metal and Guns’N’Roses were ceding the stage to grunge—and of course, riot grrrl was happening.

I commented to a friend, on the occasion of discovering that there was an entire issue of Rolling Stone dedicated to the top 100 Beatles songs, that I wished Baby Boomers would back off already. My snark was that the Beatles have been declared the best band ever simply because the generation that grew up on them is the biggest one ever, and continues to be the one in control of the music industry. (And certainly Jann Wenner is still ruling Rolling Stone with an iron grip.)

I went on to joke that we should declare a band of our generation The Best Band In The World, or at least Better Than The Beatles.

It took me about two seconds to suggest Sleater-Kinney.

Sleater-Kinney were bigger than riot grrrl, bigger than punk rock or indie rock. “I Wanna Be Your Joey Ramone” was a declaration of intent, an audacious claim to an equal footing with male icons that they more than delivered on. Each record kicked down another barrier around what they could do. After The Woods it must have seemed like there were no walls left for them to kick down, so they stood there for a second looking around and then took a break.

I’ve already written about Corin Tucker’s new record and her live show, and the biggest music news of MY week is that there is now video of Janet Weiss and Carrie Brownstein’s new band Wild Flag, with two other rock icons, Mary Timony of Helium and Rebecca Cole of the Minders. (The next person who calls them 90s icons gets smacked. No, for real.)

(Via Pitchfork. Sorry no lyrics yet.)

“Racehorse” is fierce and ragged-edged, reminding me a bit of what I love about Alison Mosshart as much as what I love about Sleater-Kinney or Helium. It’s going to take me several more times through these songs, live and (next spring/summer/NOT SOON ENOUGH) recorded, to develop a relationship with them as intense and nuanced as they deserve. I’ll no doubt spend the rest of today rolling them over and over in my head, listening, taking a break, returning to them off and on, finding the best ways to talk about them.

I know I haven’t given them their due here, but I do plan on writing about them in ridiculous depth when the record hits. I don’t like to drown the new band in discussion of the old, I really don’t, and especially when Mary Timony and Rebecca Cole are musicians as worthy of my time, effort, thought, and words as Carrie and Janet (and Corin).

In fact, maybe that’s a good place to wind up, here, noting that instead of being thrilled by the Beatles, the world’s most ubiquitous band, a band I think of as part of the ether and a band that ended long before I was born, being one click away from download at any time, I am thrilled that there’s something new to look forward to from living, breathing, growing musicians whose past work has meant something deep to me and who will continue, no doubt, to shape my future.

I think the Beatles are/were better as indivdual artists than a collective...I think Lennon--though most memorable--may be a tad overrated...Harrison and Ringo are good enough...but it is McCartney who has some gem singles that should garner more attention than any of the Beatles' minor and mediocre hits...

Anyways, solid post as usual...nice to hear a different prospective in regards to music once in awhile...

Please keep covering Wild Flag! I got to see them at the Portland show and they were incredible--buncha rad women with a great sound. I'm looking forward to their first release and hoping they make many more after that!

Point taken, and there's something to be said for going against the established wisdom. I sympathize with not liking what you're supposed to like (I repeatedly wonder, to my liberal friends' astonishment, how anyone with functioning ears can like Bruce Springsteen). But it's unfortunate that the singer in the video above of "Beast of Burden" is so flat. A singer out of tune is not fun to listen to, no matter how riot grrrl or genderbending she is. "Racehorse" is better, although it seems painfully repetitive - and it's so loose I wondered if they forgot what song they were playing. Hopefully the album is better. 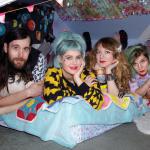