Music Matters: I Make Me So Damn Easy To Love | Bitch Media

Music Matters: I Make Me So Damn Easy To Love

Let’s start this off right, shall we?

‘Cause I LOVE Beyoncé. I love pretty much everything about Beyoncé. We need a Beyoncé—a gorgeous, talented woman whose career doesn’t consist of pushing envelopes or trying to shock us or even in trying to come up with something new. She simply makes good pop music, is stunningly beautiful, and keeps her personal life out of the spotlight. She’s probably the hardest-working woman in show business—or one of ‘em—and I love her.

So really, there’s no need for her to ask “Why don’t you love me?” But she did—and the video? It made me love her so much more.

“Why Don’t You Love Me” - Beyoncé from Beyoncé on Vimeo.

Silvana***, of course, said it when the video hit:

I’d say that the song and the video together form a radical critique of femininity, full stop. Because this is what femininity is about: making yourself appealing to men by adhering as closely possible to cultural ideals of perfect womanhood. Her lyric is not “when I am so damn easy to love,” but “when I make me so damn easy to love.” It’s effort, it’s a construct, it is something she does and not something that she is. It is performative.

Beyoncé is critiquing femininity, all right. “B.B. Homemaker”? Yep. She’s the pinup, the wife, the game show hostess. She has Bettie Page bangs or a giant upsweep, a martini and bling that’s ridiculous even by the modern standards of hip-hop videos. She washes dishes—angrily—and she does laundry, both in ridiculous heels. And the video is shot in retro-feeling soft focus, transporting us back in time. She starts the video trying to fix a car, then, shrugs, gives up, and goes back inside to make herself “beautiful” again.

Latoya Peterson wrote about the way middle-class black women (and black pinup girls) have been erased from our mental history of the fifties, the way it seemed transgressive to white critics for Beyoncé to play that role. I still think it was, but in a different way—Beyoncé claims a history that’s been erased, reminds us that the much-loved Mad Men leaves out a whole part of that time period, that this as much as anything is what segregation did: leave us unaware that this was a possibility.

But by far the most spectacular and memorable part of this video is the meltdown, the coming apart. Beyoncé’s melting makeup, the jerky movements, her costumes and the rolling up and down of stockings all deconstruct the performance that is gender, that is a pop star. She’s not only giving us a critique of femininity, she’s giving us a critique of the idea of Beyoncé. She’s showing us how easy it would be to let it all fall apart. The “you” in the song title isn’t just a lover, it’s all of us. She’s taking apart our pleasure in looking at her.

As a “curvy” (white) girl myself, I lose patience quickly with the every-few-years rediscovery that women don’t come in one shape. Since Mad Men hit, for instance, Christina Hendricks’ body has been obsessed over endlessly, as if she’s done something entirely new by having breasts and hips. And the fetishizing of Beyoncé’s body has come with a healthy dose of “Black women are allowed to have curves!” without any acknowledgment of the fact that Beyoncé too has to work to maintain her body, the muscle and trim of it.

No, this video’s not about size and body image per se—her meltdown involves booze, cigarettes, falling over, giving up on her awkward dance and household chores. In fact, this video is also remarkable among Beyoncé videos because she doesn’t really dance in it. Instead of the Beyoncé we’re used to seeing, sinuous, graceful, powerful, subverting her own lyrics with her movement in ways that would make Julia Kristeva proud, here she’s mimicking “sexy” dancing for the male gaze, an entirely different performance particularly because we are so familiar with Beyoncé’s actual dancing.

Beyoncé gets critiqued by feminists regularly for her lyrics—I’ve done it myself—but as Isabel notes, pop music is not poetry, it is a performance that you can’t simply read for the words alone. This is particularly true when the artist has given you a video performance to read as well as the vocals, and particularly now as we’re seeing the YouTube-led resurgence of the music video as an art form years after MTV gave up on actually playing music videos.

Kristeva allied “the functioning of that ‘air or song beneath the text’ with woman,” and Beyoncé’s singing and dancing have always subverted the “patriarchal” literal reading of her lyrics—it’s why there’s nothing better to grab your girls and dance to than a Beyoncé song. But in this video she lays it all out for you to see: the (de)construction of a pop star.

***I originally said that this was Sady–but I was wrong! It was Silvana, who is equally rad and deserves her credit. Sorry, ladies!

I believe Beyonce is one of our generation's greatest feminists, thank you for pointing this out! She is under-recognized as an extremely strong, smart, and independent woman. I LOVE her too!

Great analysis and great video. In addition to the aesthetic value of this video, there's also a lot here to unpack. The image of a woman in her lingerie, knowing that her eyeliner is running like crazy and not caring, hurting like the dickens and swinging around her martini, demanding to be acknowledged for what she's worth, is searing.

THIS is the image of femininity, and black femininity, I want to see. It's not simpering, but it's also not empty mouthings of "Girl power". This is personal power, and personal flaws, in a difficult personal situation. She is not representing anybody but herself in this video, and I think that's how it should be.

I have to say I was never a huge fan of Beyonce--nothing against her, of course, her musical style just wasn't to my taste. This is the first video of hers (that I've seen) that I actually really like and that seems (to me, anyway) to have something of a solid concept behind it, both in statement and artistic execution. I think its success really lies, though, in the melding of the "traditional" Beyonce video style--plenty of beauty shots, dancing, outfit changes--with the more conceptual, statement-driven aspect. It's something that might be more accessible, less "out there," than, say, a Lady Gaga video, but still resonates with a clear critique and an artistic style as well as a darker side, and a willingness to be something other than "pretty" or "desirable" on camera, that I haven't seen in a lot of Beyonce's work. 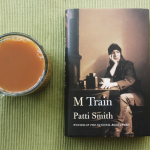 by Jess Kibler
Over many cups of coffee, the iconic poet and punk singer's new book is a meandering meditation.