I’ve written about Robyn a lot, I know. This has, as I’ve mentioned, been the Year of Robyn for me. But this video hit last week and aside from being steamy, sent me spiraling off into a train of thought that I couldn’t keep to myself.

Talking with a friend about the video and the tubes full of liquid that Robyn is wrapped in, I used the term “abstract futurism,” which is totally me being pretentious. And yet, the tone of a lot of Robyn’s songs, both on the Body Talk recordings and her previous work, evokes a world of robots and a world of love—the visual best suited was maybe already snagged by Bjork for “All Is Full Of Love.”

When I wrote about Robyn at Feministe this summer, a commenter said she was disappointed that Robyn seemed to have “jumped on the whole robotic-pop bandwagon with Lady Gaga et al.”

And then, my co-guest-blogger s.e. smith responded to my Robyn love with some Janelle Monae love. And I couldn’t top that, really—the two of them have put out what I’d call the best two records of the year (even though Robyn’s technically put out more than one herself, whatever, it’s fine). They’re both expansive pop musicians who feather their records with bits of everything that’s flown through music in the past few years, and though Monae particularly absolutely defies categorization, they have some threads in common.

And one of them is an obsession with the not-quite-human, a return over and over to images of robots, androids, cyborgs, the future in a technological sense but also a political progressivism that runs under the surface, manifesting in Robyn in lines like “We need a black pope/and she better be a woman” and a constant pop feminism that refuses to let itself be easily defined, and in Monae in “Ghettos keep a crying out to streets full of zombies/Kids are killing kids and then the kids join the army” and other lyrics that are transnational, global, pro-peace, and quietly revolutionary.

Cyborg feminism. Where have I heard that before?

I went back to Haraway recently after someone had linked me to a piece citing her in reference to Kanye West-as-cyborg. And it got me thinking about pop stars and media personalities as technologically-created bodies. For instance:

When you think of someone like Kanye West or Lady Gaga, you can’t think only of their brains and bodies. Lady Gaga in a simple dress on a tiny stage in a no-name club in Des Moines is—simply put—not Lady Gaga. Kanye West in jeans at a Starbucks is not Kanye West.

Pop stars create themselves from technology. They are no longer simply themselves, to us they are body and music and even that body must be shaped, disciplined, re-created. Gaga, of course, shows us how that’s a distortion, and some people like her and some hate her for it—the commenter at Feministe seemed to want a “natural” Robyn, but as Haraway points out, there is no natural, unmarked, uncreated body. “Cyborgs might consider more seriously the partial, fluid, sometimes aspect of sex and sexual embodiment. Gender might not be global identity after all.” There is no Robyn without her music, without the technology that creates it, without videos to interact with.

Haraway was writing as a trained biologist in response to other forms of feminism in the 1980s that she saw as problematic, and yet her work seems endlessly applicable today. Today, on election day, while I alternate between hope and despair for our politics, I’m also obsessed with a less-abstract futurism—I don’t want tubes or even jetpacks just because they’re cool, and even though I joked with Laurie Penny this morning on Twitter about leaving the planet, I don’t want to leave it behind because we’ve burned it out and used it up, or because it no longer welcomes strange beings like us.

I’m arguing with these posts that in many ways big and small, music matters, and with that argument I’m looking at factors small and large in the music itself and its presentation and the personae of the people who create it. Can I find solutions for the world in a pop song, even in a pop song that isn’t about changing the world and simply asserts “Fembots have feelings too?”

Writing is preeminently the technology of cyborgs, etched surfaces of the late twentieth century. -Haraway

Writing in the early 21st century so often takes place on the Internet (I’m preparing mental and physical notes for Thursday, when I’ve agreed to join a panel on the Death of Print Media) that I have taken a joking self-portrait that was my hand on a laptop screen, saying “This is what most of you know about me.” So many of our interactions are mediated and made possible by technology that the joke that without the Internet it’s like navigating without a limb suddenly is less hyperbolic and more factual each day. I was without an Internet connection for two days at my apartment last week and I felt completely cut off.

Because the technology now does not only shift our bodies, it subtly shifts our contact with others—it changes how we relate, how much connection we are used to and require.

And pop music, despite seismic ripples in the industry that delivers it to us, has adapted to the Internet rather well, both in medium and in message. Technology now is how we communicate. Is it also how we create change?

Cyborg imagery can suggest a way out of the maze of dualisms in which we have explained our bodies and our tools to ourselves. This is a dream not of a common language, but of a powerful infidel heteroglossia. -Haraway

Janelle Monae’s album, The ArchAndroid contains such a beautiful explosion of musical references—it’s like every style and sound you’ve ever heard in one album, with one woman playing so many roles it’s impossible to imagine her as just one person. She skates over lines between races and genders as well as genres. Robyn sings in multiple languages, re-creates songs with changes in technology, brings impossible warmth to images of cold machines. She raps at breakneck speed in circles around Snoop Dogg, deftly making his language her own.

The world they envision is a world where space travel and robotics are everyday items, where we speed past war and land skidding in a place where love is our biggest concern.

It’s a world I wouldn’t mind living in.

All I have been doing lately is thinking about cyborgs and I think it's interesting that you approached them as a technological positive in regards to musix. I've mostly been thinking of them as an extension of our societal fear of the other, especially when you consider cyborgs in and human realistic robots in film.
Neat stuff.

I love the Janelle Monae video. I don't know if I'd want to live in that world, though--not as an android, anyway. One thing I've always noticed is the use by artists of the female-shaped android (gynoid?), which to me speaks not only to the created body mentioned in this article, but to the production and sales, as it were, of the female form. That is, after all, the basis of "Many Moons." The artists seem to be playing with the idea of the body as material vs. spiritual, owned object vs. autonomous being, as well as dealing with the subject of appearance: though an android appears to organic people as being merely an object, Monae's and Bjork's androids are shown as possessing feeling beneath their artificially constructed exteriors. There was a posting on Bitch a while ago about the Broken Bells video starring Christina Hendricks as an android who sells off her limbs to get to a paradise planet, and I can't help being reminded of that now.

Androids in that world are severely oppressed, and poverty is a huge problem. What you're watching in the "Many Moons" video is a slave auction; referring to that American past, the role of the entertainer (especially a Black entertainer) in a mediated world, the Civil Rights Movement, and the economic oppression of the inner city. Gaga is also auctioned off in the "Bad Romance" video, but she triumphs through sheer force of personality in an arena that lacks a larger political context. Monae's Cindi Mayweather is explicitly figured as a (perhaps unwilling) political movement leader. Monae is always referring back to today's political reality: another way that she is not utopian.

What Monae gets right and Haraway gets wrong (in my opinion) is that bodily difference is much more likely to be used as a fulcrum of oppression than as a mode of resistance.

<p>I agree about the dystopian nature of the monae video. i read the ending as a "<a href="http://www.nationalreview.com/nroriginals/?q=MDllNmVmNGU1NDVjY2IzODBlMjY... target="_blank">harrison bergeron</a>" type climax, where clearly one of the programmed people/machines began to understand personality and see the injustice in the system, and break the rules of the matrix. they end almost identically, actually, with the protagonist in midair, destroyed by the authority figure. i wouldn't be surprised if monae (or someone on the creative team) had that book in mind when they planned this video.</p>

Totally! I love that book!

thank you for this post, sara. i have been embarrassingly behind on the robyn revolution, and am stoked to get onboard. i read "cyborg manifesto" my first year in college, and remember food literally falling out of my mouth in the dining hall while i read, because my brain muscles were all being used to process that article. i should try again in light of your work and the general ways the cyborg conversation has developed in the last six years. i hope i kept it. thanks again for re-firing these neurons in my brain, and introducing me to robyn along the way!

So happy to see Janelle Monae get love here. Totally agree, best of this year. The albums hold together as concept albums about an android in metropolis but they are full of groovy dancable strong feminist/activist/humanist statements about the present day. "She'll fight for her man but not her rights even though it's 3005" from "Locked Inside" or "Daydreamers, please wake up, we can't sleep no more" from "Sincerely Jane" on the previous album. Besides which it is so much fun noticing the musical allusions in these songs... or just dancing. 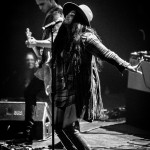