The Super Bowl is a spectacle you can’t ignore even if you want to.  Whether you spent the holiday pounding cheese sticks or eating redfish po’boys like me, you had to notice that yesterday’s record-setting 47th Super Bowl featured another key component: terrible commercials.  Companies shelled out nearly $4 million per 30-second segment and the spots battled each other to see which could be the most outrageous.  There were so many regrettable commercials this year and it was really hard to choose which were the worst.  Here are my top 5 most sexist Super Bowl ads of 2013.

1. GoDaddy: “Perfect Match”
Domain name service GoDaddy reigns supreme as the Super Bowl’s worst ad of 2013.  This 30-second commercial features super model, Bar Rafaeli, and a fuzzy haired “nerd” by the name of Walter.  Each represents the two sides of GoDaddy: sexy and smart. Naturally, Bar is reduced to her sexuality and the dude is reduced to nothin’ but a brain. The two proceed to engage in a 10-second long lip lock, intended to gross the viewer out.

2. Doritos: “Fashionista Daddy”
In this clip, we see a little girl dressed in a pink dress and tiara in her pink and purple bedroom.  She asks her football-toting dad if he’d play “princess” with her, but he uses the excuse of having his buddies waiting for him.  When she bribes him with Doritos, however, all things change.  We soon see her father in a dress and make-up.  His friends come looking for him and though they looked shocked, they too join in and are all dressed up, wearing makeup, and eating Doritos.  A nagging mom comes home, with groceries, and is annoyed at dad’s friend for wearing her wedding dress.  It’s hard to choose what’s worse about this commercial but I’m gonna go with the idea that a daughter must bribe her father in order to spend time with him.  Lastly, is it really necessary for the little girl in this ad to want to play princess?  I promise you that girls like to play other things too, Doritos.

3. Gildan: “Getaway”
Here we see a dude waking up from what looks like a wild one-night stand.  He emerges from the floor with lipstick smeared on his face and fuzzy leopard-print handcuffs around his wrist.  As he attempts to sneak out before the girl in bed wakes up but he realizes he’s left his favorite shirt.  Instead of sleazily making off without it, he chooses, rather creepily, to attempt to peel it off the girl WHILE SHE’S STILL SLEEPING.  Why is it that this guy is trying to flee the scene in the first place and how does Gildan think it is acceptable to suggest that taking off a lady’s top while she sleeps, and clearly without her consent, is okay?

4. 2 Broke Girls: “Spectacular”
Seriously?  This ad was the most blatant use of sexualization in the Bowl.  2 Broke Girls stars Kat Dennings and Beth Behrs both strip down to red thigh highs and patent leather outfits—complete with aprons—while dancing on a pole together to “Pour Some Sugar On Me.”  When Dennings pauses to ask why they are dancing at all, Behrs retorts “because it’s for the Super Bowl!” and the two continue, without question.  Does CBS think that girls who are poor should be stripping?  Er… do they just mean the girls on their show?  Either way, we’ll pass on the excuse.

5. Godaddy: “Your Big Idea”
Simply put?  This ad is obnoxious. Once again, we see the age-old stereotypical wife nagging her husband, whom, coincidentally, has the “next big idea” (not the wife, though, of course). The message winds up being that men should listen to their wives because—no matter how annoying her harping may be!—because you could end up rich,  just like the stuffy white folks at the end of the clip.

What was your pick for most tasteless ad from the Super Bowl?  Is there one we missed that should’ve made the list?  Let me know in the comments.

I think that #1 is missing - anyone else not seeing it?

Where's the fifth most sexist ad? I'm dying to know!

carl's jr. is always a winner for most sexist in my book.

Agreed! Apparently driving an Audi makes it acceptable to sexually assault someone and then run away with a swell look of victory. I couldn't help but stare at the TV in shock.

I agree. Choosing just 5 was a really hard decision. The fact that at the end of the ad they have the nerve to call it "bravery" is even more shocking.

panties. Any strange man engaging with panties is #1-#4, except where the girl thanks him for doing it. That is #5.

Yeah I'd swap that out with the #5 GoDaddy ad and make that one an honorable mention. As contrived as that ad was (the nagging wife thing), the messages weren't as terrifying and obscene as they typically are. And hey, my honey is always looking for the "next big thing" so I could relate a little bit..

Thanks for doing this list, Emily! I always teach the super bowl commercials in my classes so you saved me a lot of trouble of having to watch them all. And, for the record, I find #5 to be the absolute worst, because, you know, patriarchy is basically the same everywhere.

I actually mentioned that aspect in my write-up before edits were made. No matter what part of the world you're in, the message is the same! (Wives suck). 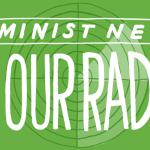 by Patricia Romero
Today we are reading about gun violence, Black Lives Matter, and Charlie Sheen.