My Summer With Agent Scully

The summer between sixth and seventh grade was a long one. I was super gawky—already six feet tall, equally passionate about science and musical theater, with pants that never quite reached the ground—and I spent most of my days on the sofa, wolfing down episodes of The X-Files.

Today, the show celebrates the 20th anniversary of the day its first episode hit the air. As a tween, I couldn’t have asked for a better role model than Agent Dana Scully.

Looking back on the show, it seems extremely cheesy. Aliens, conspiracy theories, FBI agents tromping around through foggy woods—was there really a time when I thought that low-budget intro montage with the lightning plasma ball was truly awesome? But when I was 12, first defining my identity via pop culture, I really did love the show.

During that summer, I recognized my addiction and decided to limit myself: no more than three episodes of The X-Files a day. In the days before the internet, this meant walking every afternoon to the video store, where I could rent a VHS tape with two X-Files episodes, and then staying up late enough to watch the episode broadcast at 9pm on FX. It’s arguable that I hung out more with Dana Scully than with any real-life individual. Which is alright, actually, because Agent Dana Scully is a smart person to make my BFF. She’s the woman with all the acronyms (B.S, M.D, FBI), a brave and hard-nosed scientist who believes in justice and skepticism.

What I loved most about Agent Scully was her steely confidence. Despite her advanced science degrees, the men around Scully on The X-Files are constantly telling her she’s wrong. The plots of most episodes are built around a central, repetitive conflict: something unbelievable happens (a human is sucked dry of all blood, say), and Scully comes up with a realtively logical, science-based theory (murder) which her partner Fox Mulder immediately rolls his eyes at and dismisses, insisting that the supernatural must be at work (“IT CAN BE ONLY VAMPIRES! Unless it’s the chupacabra.”) Usually, in the end, both agents are a little right and a little wrong, but the important part is that no one can bulldoze Scully. She’s not a preachy spoil-sport, she’s written as a rational person who never fails to stand up for her ideas.

What’s rare about Scully’s character is that while she’s and the show’s male lead have some ongoing sexual tension, she’s not defined by her relationship to any of the X-Files male characters. Scully is definitely her own person, not a sidekick or a sex object or a plot device to further Mulder’s story. She’s not a damsel in distress, either, as Scully often rescues Mulder when he finds himself on the wrong end of a poison dart or nuclear submarine. Often when there’s a smart women who’s can shoot guns, arrest bad guys, and stand up for herself, she gets written as a Strong Female Character who lacks complexity and contradictions. But Agent Scully is open-minded and her science-minded personality is complicated by the fact that she’s also Catholic. Her struggles to balance her beliefs in science and Catholicism—while challenging Mulder’s zanier supernatural beliefs—develop her into a character with depth.

Finally, Scully is straight-up capable. She’s the character on the show who actually gets shit done. While Mulder chases down supernatural creatures, she’s the one who does the nitty-gritty work of dissecting them. The show never shies away from a chance to show Scully dropping a disgusting internal organ onto a medical scale, reminding viewers that Scully’s responsible for the unglamorous, practical day-to-day work that actually leads to clues and solving crimes.

The X-Files certainly didn’t get everything right. It’s monster-of-the-week formula occasionally featured distorted, stereotypical versions of African and Native American spirituality, for example, there were few main characters of color, and don’t even get me started on the worthless last few seasons of the show.

But for a young girl looking spending a summer flipping through channels, Agent Scully stood out as a realistic character who excelled in her career, expressed herself boldly, and could rock a trench coat like no other. Happy anniversary, Scully.

I could relate to this article until the misplaced "few main characters of color" line. Why should every (or any) TV show feature a shiny happy multiracial cast? It's not representative of the real world, especially in the US, where the X-Files is generally set. 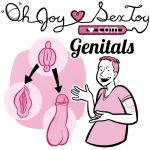 by Erika Moen
In her sex-positive comic strip, Erika Moen explains the basics of human anatomy.