A Tale of Two Bunnies: Naturi Naughton in Mad Men and The Playboy Club | Bitch Media

A Tale of Two Bunnies: Naturi Naughton in Mad Men and The Playboy Club

Those of you who’ve seen both AMC’s Mad Men and NBC’s soon-to-be-cancelled The Playboy Club have probably noticed a similarity between the two shows. No, it’s not the guy on The Playboy Club who’s doing his best Don Draper impression, it’s Naturi Naughton, America’s favorite “chocolate” Playboy bunny (yes, she is referred to as a chocolate bunny in both shows. Ugh). Who wore it better? Trick question, you guys.

Though Naughton’s being cast as the token black Playboy bunny in both shows might be a mere coincidence (or maybe she owns her own bunny suits), her performances—and the two show’s handlings of the complicated race, class, and gender issues a black Playboy bunny might have faced in the early ’60s—are begging for a comparison. Let’s get to it!

Naughton’s character:
In Mad Men she’s Toni Charles, the clandestine love interest of (white, wealthy) Lane Pryce. Though the two clearly care for one another, Toni is the cautious one in the relationship, knowing that her job and possibly her safety is at risk if the wrong people find out about the interracial coupling. Lane, on the other hand, makes an ass out of himself—twice—introducing her to his racist jerk of a dad.

In The Playboy Club, Naughton is Brenda, a nice-seeming woman whose primary goal within the context of the show is to be the first “chocolate centerfold” in Playboy magazine. She mentions encountering racism in the world at large, but says that within the Utopian world of the club “no one can discriminate against these” (referring to her breasts, natch—a line of dialogue most likely written by someone unfamiliar with the racist history surrounding black women’s sexuality). Full disclosure: I only watched the first of The Playboy Club’s three episodes, but here’s Brenda’s show bio with a bit more info:

Being a young, African-American woman, Brenda is keenly aware of how the world views her. But inside the Playboy Club, she’s safe to dream big. Brenda knows how lucky she is to be a Bunny and doesn’t take it for granted. She’s close with the other Bunnies and relies on them to keep her in check at times since she can be quite competitive and hotheaded. Sassy and bold, Brenda has no problem telling it like it is—except when it comes to her own family. Her Baptist pastor father thinks she’s a schoolteacher in Atlanta, and he’d be furious if he knew the truth. Though she plays the part of a rebellious daughter, deep down Brenda longs for her father’s approval.

Screen time and character development:
Toni Charles (note the last name) appeared in only one episode of Mad Men (watch it here), but she was shown both at work and outside of the club, wearing her bunny suit as well as two different modest (and darling) dresses. Though clearly a plot device to complicate Lane’s relationship with his father and necessitate his return to England, Toni is nonetheless portrayed as an individual with feelings and an identity beyond “chocolate bunny” (though Lane may be too nearsighted to see it). Bunny Brenda (note the lack of last name) gets more screen time on The Playboy Club, but she’s still very much a supporting player. We don’t see her much outside of the club (though it sounds like her back story was developed a bit in more recent episodes), and we aren’t given much insight into her as a person—just her as a bunny. Part of this is because The Playboy Club is about Playboy bunnies, of course, but keep in mind that we have seen some of the other women pursuing interests beyond the club’s walls.

Acknowledgment of racism:
Again, Toni is only in one episode of Mad Men. However, in keeping with the show’s reputation for nuance, her minute-and-a-half scene interacting with Lane, Don, and Lane’s dad in the club is chocked full of racially charged discomfort. It’s clear that Lane is using her to show off to and rebel against his dad, and the creepy way in which all three white men stare at her is very different than the (also creepy) way they stared at the white bunnies. Later in the episode, Lane confronts his father about disapproving of Toni because she’s black. Racism is certainly acknowledged (though still downplayed—she was only in one episode, after all) and it’s racism, combined with Lane’s cowardice, that ultimately breaks he and Toni up.

The Playboy Club tries to have it both ways when it comes to racism. They address Brenda’s token-ness by mentioning racism and discrimination, but they gloss over it by saying that she’s safe and sound inside the club. See what I mean in this short video clip:

Of course, Brenda is also written as “sassy and bold,” as well as “competitive and hotheaded” (notice her “welcome to the future, baby” closing line in that promo), which is hardly without racist connotations. On a better show, they’d acknowledge her less-than status within the hierarchy of Playboy bunnies as well as outside it. This is not that show.

In conclusion:
Though given a fraction of the screen time, Naughton’s character on Mad Men was more three-dimensional and relatable than her recurring role on The Playboy Club. I for one am glad that The Playboy Club is over, because it frees Naughton up for more Mad Men appearances (Attn Matthew Weiner: Bring her back in season five!).

Perhaps a more interesting question to ask, though, is which television show will ask Naturi Naughton to appear next? She’s clearly America’s pick for “lone ‘chocolate’ Playboy bunny” roles.

I never saw The Playboy Club (and don't care to) but I thought Naughton did an excellent job in Mad Men. I was actually surprised to read that she was only in one episode because I remember all of her scenes clearly and I rarely, if ever, remember any scenes when the actor's only been in one episode of a show. After reading this, I have to agree with you in saying Mad Men did a far better job at portraying the complexities of being an African-American Playboy bunny. Of course it could have been better, but compared to The Playboy Club, Mad Men hit it out of the park.

I'm all for portrayals of black women as sexy but not sex objects, especially when it's a darker skinned black woman, because usually it's an actress who's so light skinned she either is or appears biracial. (Disclaimer: I'm one of those so-light-skinned-she-looks-biracial women, so I'm definitely not hating.) Black women, including us light-skinned ladies, are usually portrayed as either totally unattractive or disposable sex objects, and obviously both of those are insanely racist and sexist stereotypes that I am beyond sick of.

Gloria Steinem must be happy-dancing now, right alongside the Parents TV Council (even though they have nothing in common), proof that strange bedfellows can actually stand for something alongside each other. Just by looking at the previews alone had me convinced that this was no <i>Mad Men</i> at all. Bonafide misogynistic TRASH was all <i>The Playboy Club</i> was in three episodes. Good riddance!

Love the insightful content as always at Bitch, but a bit sad that this article has tacitly endorsed the pirating of copyrighted material by linking to megavideo.

I looked everywhere I could think of for a clip of the episode, but couldn't find one and wanted those who hadn't seen the episode to see what I was talking about. If you (or anyone) has another source for the video, please let me know!

You know, I suspect this kind of thing counts as fair use, as well. It's a brief clip, not an entire episode, and it's being used in a critical/education context, to make a critical point about the piece. Just sayin.

I think you're right about fair use in this case because of the clip's being used for "educational purposes" (and not in a way that could be construed as competition for the original version). However, I couldn't find an embeddable clip! Hence the linkage.

Kelsey and Laura you are both correct that a critique using copyrighted material generally falls under the provisions of "fair use". Please remember that when using copyrighted material you must also consider the amount of material used as a proportion of the whole, and the effect the use of that material will have upon the market value of the original. A "clip" that shows a few minutes of a program that is an hour long is fine (unless perhaps you are showing a "spoiler" that would then put people off watching the entire thing). Using an entire episode is a bit dodgier, unless perhaps you are critiquing the entire series. Considering that you can watch the entire series of Mad Men on megavideo, that link could potentially constitute a market impact on the copyright holder.
However, I am unsure that a hyperlink constitutes a violation of copyright (I suspect it is merely thin ice). My complaint was *not* that Bitch violated copyright, it was instead that Bitch condoned piracy by providing a link to pirated material. I am one of those fuddy-duddy librarian types who thinks copyright is important, and as a nationally published magazine, I would hope that Bitch would agree and would set an example of proper "fair use", not hand the tools of piracy to its readers.

<div><p>I have never seen either of these two shows and it appears that I will not get the opportunity, if I wanted to, to see "The Playboy Club." Thanks for this great article and I can't wait to see what else you have to offer. </p><p>If you wager at an <a href="http://www.freshpokertips.com/tips-for-playing-pai-gow-poker/">tips</a> then you already know how the gambling action can keep you wagering for hours.</p></div>

I watched the first two episodes and it deserved cancellation. It was trying to be Mad Men with costumes and Eddie Cibrian making Don Draper faces, but none of the dialogue matched the era. Of the episodes I witnessed, racial issues were dealt with badly. New Bunny, Bunny Maureen, seemed to be dropped into the past from the future. While Brenda is opening up to her about how she wants to own a nice home someday and that she might not be able to because she'll be discriminated against, Maureen seems all too confused by the concept of discrimination. Along with Brenda, there was one more black character who was a costumer. To me, in their brief appearances, the black characters served as "magical negroes." They existed almost solely to impart wisdom to naive white women. This advice was mostly in regards to Nick Dalton (Eddie Cibrian). This show was problematic and wasn't any good, I'm glad to see it go.

Relevant: From Producer Salma Hayek, "The Prophet" Focuses on the Political Power of Poetry 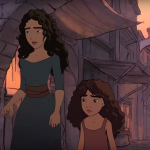 by Stephanie Abraham
Salma Hayek and Quvenzhané Wallis voice a brave mother and daughter in a the dreamy, poetic film.