Nearly Three Hundred Girls Were Kidnapped in Nigeria. So Why Isn't It Front Page News?

Three weeks ago, roughly 276 girls were kidnapped from a school in Northeastern Nigeria. The girls’ parents are devastated, the Nigerian government seems unable to track down the victims, and the leader of the group that has claimed responsibility for the kidnapping is threatening to sell the girls as slaves.

So why isn’t this front-page news in the United States? Only in the past day, as thousands of concerned people around the world have joined onto a campaign to raise attention about the girls’ plight, have news outlets picked up the story in a big way.

While the story has sporadically been in the New York Times and other major outlets over the past three weeks, it has been dwarfed by issues like the tensions in Ukraine and Korea’s ferry disaster. In the absence of mainstream media coverage, thousands of concerned individuals have been rallying on social media and in person to bring attention to the kidnappings and prompt Nigerian and international action.  Over the past week, people have filled the hashtag #BringBackOurGirls with tweets and posts about how people around the world need to learn about the kidnappings. At a rally outside the Nigerian embassy in Washington DC today, hundreds of supporters wearing bright red shirts emblazoned with #BringBackOurGirls called on Obama to support the search for the girls. The protest and grassroots pressure on social media seems to have potentially worked to get the government’s attention, as the White House agreed late in the day to offer Nigeria the help of American military experts. In Nigeria, meanwhile, the girls’ parents and supporters have staged numerous protest marches and rallies, but the country’s First Lady allegedly ordered police to arrest the protest organizers. That’s certainly not the kind of action the parents of the abducted girls were hoping for.

The increasingly loud demand for media coverage of these kidnappings highlights how while some crimes dominate international headlines, others comes and go as barely any attention. In this case, experts and news watchers can agree that if the massive kidnapping were happening on any continent but Africa, there would likely be much more pressure to report on the case and prompt international action.

Chicago journalist Bob Jordan is working on a book about the issue of what topics get media coverage and what don’t. During his 40 years as a TV news reporter and anchor, mostly for Chicago station WGN, Jordan has seen first-hand how race, age, class, and geography impact what stories get covered. For his book, he surveyed assignment editors on what they would do in a hypothetical situation: Imagine you have one TV crew and find out about two simultaneous shootings—one is a boy shot while walking to school, another is a boy police suspect to be a gang member who was hanging out on a street corner. Every single editor elected to send the TV crew to cover the death of the boy walking to school. The research reveals what we all know: in media, all human lives are clearly not created equal. That’s especially obvious with the case of the kidnapped Nigerian girls, says Jordan.

“If this was a school in London, there would be news crews from all over the world on the scene. There would be helicopters in the air,” says Jordan. While international stories like the disappearance of Malaysian jet MH370 are front-page news for weeks, until today, the Nigerian girls were barely a blip on the radar of American news media.

The lack of media coverage is bigger than just decisions made on the assignment desk, though. Jordan’s colleague WGN Morning News producer Tyra Martin is one of the journalists who tried all last week to cover the story of the kidnapped girls—but she had trouble making any progress. Martin spent a full week trying to find experts, officials, or human rights workers on the scene in Nigeria who could talk to press. She got zilch. Finally, an intern found a DePaul University Political Science Professor who happens to be from Nigeria and could at least address the political situation in the country. “The segment will air this Saturday on our public affairs show, but interest just hasn’t been strong enough to do more than a :13 voiceover story on the big show, WGN Morning News,” Martin wrote, via email on Friday.  Martin says that, as an African American woman, she’s sensitive to how underserved communities are portrayed in the news. But getting the girls’ story into national media requires images, video, experts—all sorts of resources that are hard to come by when news agencies don’t have an established presence in a country.  “On this issue specifically, it’s terribly frustrating because if was happening here in the States, we’d lead the news with it every hour. If the girls were missing from France or Canada, the story would certainly be in the first block. But 230 missing school girls from Africa are barely mentioned and when they are, it’s less than 20 seconds often without video… just a map.”

Now, thanks to the campaign of #BringBackOurGirls, the world seems to be watching. The story landed on CNN and New York Time’s front page this afternoon, especially as a new kidnapping and Obama’s offer of help gave the tragedy a fresh news hook. Advocates and activists have successfully put the missing girls in the spotlight.  Let’s hope all the attention leads to actions that help get those girls home.

<p>Hmmm... I disagree with the statement "If the girls were missing from France or Canada" - race is still a factor here in Canada. There are currently thousand(s) of missing and murdered Indigenous women in Canada as documented by our national police force http://www.cbc.ca/news/politics/rcmp-confirm-report-of-more-than-1-000-m.... Some (mostly family members or friends, some communities) are demanding answers but it's not constantly covered in the media. When white girls/ women go missing it's a much bigger deal in the media and much more prominent in social media than with girls/ women of colour. As an indigenous woman in Canada, I believe it's important to point out that life is unequally valued here too...</p>

<p>How about the fact that the images being used to garner attention for the Nigerian girls <a href="http://lens.blogs.nytimes.com/2014/05/08/the-real-story-about-the-wrong-... of girls from an entirely different context in Guinea-Bissau</a>? Lack of media coverage is certainly at issue here, but so is the fact that apparently any African girl can stand in for any other.</p>

<p>Thanks for linking to the <em>New York Times </em>story that shows that many of the images this campaign put together, including the one I had in this post, were not associated with the kidnapping. I'll swap out the #bringbackourgirls photo I had in this post for one that doesn't use anyone's face.&nbsp;</p> 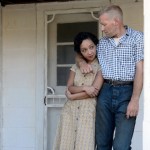 by Stephanie Abraham
The new movie is a powerful portrayal of Loving v. Virginia, the landmark case that struck down laws banning interracial marriage.