New Book Tells Stories from Inside a Mexican Women's Prison In the capital of Oaxaca, Mexico, the prison of Santa Maria de Ixcotel serves as a penitentiary for women. In one of those cells, Mary Ellen Sanger spent 33 days.

That time in Oaxacan prison spurred Sanger to write a book, Blackbirds in the Pomegranate Tree, which collects the voices of Mexican incarcerated women. Between 2007 and 2011, the number of women incarcerated for federal crimes in Mexico rose 400 percent, according to a report by the National Commission for Human Rights. Blackbirds in the Pomegranate Tree puts personal stories to the statistics of prison growth and overcrowding, as women discuss their daily lives in prison and their dealings with corruption in the judicial system.

The author’s first night in prison was spent in a corner called the cacahuate—the peanut, in allusion to its size—where 45 women slept tightly on the cement floor with only two stacked mattresses for four women. Woven through the portraits of women and of her own life in the country, Sanger’s stories create an intimate, personal understanding of how women inmates fit into Mexico’s socio-political landscape.

As Mexican Cervantes Prize-winning author Elena Poniatowska explains in the introduction to the book, “Mexico is a country where truth is NOT spoken, nor is there a culture of truth. How would the imprisoned women get a chance to speak their own truths?”

This winter, Sanger (below) and I talked about her experiences inside Ixcotel and the portraits of incarcerated women whose stories deserve recognition. CAROLINA DRAKE: Was it difficult to adapt as an American guera in a Mexican women’s compound?

MARY ELLEN SANGER: I had lived in Mexico for 17 years at the time I was arrested. And I worked very hard at learning the way to be a part of the life and culture there. But I didn’t know much about prisons. The closest I had gotten was when a friend was raped and we dealt together with the weighted justice system on her case.

During the first six days of my imprisonment, as well as I spoke the language, I didn’t have a clue how to approach the women—and I didn’t know how they would approach me. But in roll call during those six days holding, I made friends with sex workers and mothers. We all shared that we were inside. It was that simple. And we didn’t know anything about how to get out. Except I had a lawyer. I had visitors. I had people on the other end of the phone, and a Consulate that cared. When I moved to the general women’s compound, where 110 women smoked and shouted and sewed and showered, within an hour or so it became obvious to me that we had more in common than we had in opposition. We were all inside, and we were women who missed our lives out there and sometimes didn’t understand why we were behind bars.

What are some general reasons why the women where incarcerated? Where any incarcerated unfairly?

Many were incarcerated unfairly. I was not the only innocent woman there, by far. Many were there on similar land scandals, some were there because they were tricked for fraud and one—whose story appears in the book— was in for kidnapping her own child. The Mexican justice system is easy to manipulate, in my own case witnesses and judges were very likely bought or coerced.

How did you spend your time in prison, at night, and during the day? What were some of your fears?

The first thing that always comes to mind when I recall the activity of those days was the sweeping. At all hours we were sweeping!

So the place was clean enough, because we were responsible for keeping it clean! The newbies like me did latrine duty, too. That’s another way the women showed solidarity, because they helped me find the best way to do this! But during the day, there were circles of women doing needlework, circles of women listening to a boom box and singing along, circles of women praying, other circles just chatting. I was the luckiest. I always and every day had visitors. This wasn’t true for most of the women. Their families often lived far away, or could not afford the transportation. My visitors took on the whole compound, bringing snacks enough to pass around and sitting and chatting what they could with the women around me.

Can you tell us about some of the women you met and your relationship to them?

One friend, who had been in prison in the states, said to make friends with the biggest, brawniest woman there. I knew clearly who that was: the one woman who killed a rat with her foot! And that took care of itself, because she pretty quickly made friends with me! Concha and I shared a love of writing, my story in the book tells of how we helped each other deal with the theme of love. She let me see a surprising side of her, and I gifted her with a poem at the end.

You write about community in prison. Could you talk about that more?

Community was the whole thing. The supportive community on the outside that went from the US Senate to the band of friends who did daily rotations to make sure I was fed and watered! And the amazing community of women, who didn’t have a fraction of what I had in terms of support or possibilities—and did not hold my privilege against me. They took every opportunity to show that we were all suffering together from being suddenly alone. Imprisoned against our will, guilty or not. Sure, occasionally someone complained that her bra was missing. Or they fought over the distribution of my oatmeal bars. But there anyway, in Ixcotel, it was pretty tame, though one woman who had been in a larger prison in Puebla said “You wouldn’t have lasted a day there, teacher.”

Do you think it helped you to be an American citizen in this case?

Absolutely it helped to be an American citizen! I was news! I was on the BBC, NPR, Washington Post, Chicago Tribune, all kinds of media—what headlines! My hometown paper said, “Local Woman Goes to Mexico to Find a Story and Becomes One.” Wrong on the reason I went, but catchy!

In part, the book is a way to get the other stories out.

There were women inside from a wide range of socio-economic classes, different indigenous backgrounds, and different religions. While it was far from “kumbaya,” we mostly all got along.  If I had to explain it, I would say there is a certain kind of understanding that forms between women when the strongest unifier between us is the inability to leave. In a short time it was evident to me that the fears I had of being rejected for being “Gringa” were unfounded, and the women learned, too, that I would do what I could to narrow the privilege chasm between us.

Perhaps many of the women I knew inside Ixcotel are out. Perhaps not. But I know through my experience now, that there are so many innocents incarcerated. And I know of the conditions, and the disparities and the great injustices that continue.

Mary Ellen Sanger’s book Blackbirds in the Pomegranate Tree: Stories from Ixcotel State Prison was published by CreateSpace in November 2013. Carolina Drake is a freelance Argentine writer. She misses watching the rain fall endlessly in Mexico and tweets @CarolinaADrake. 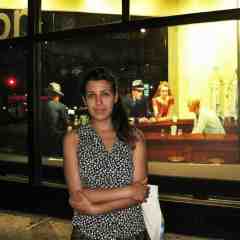 I appreciate the opening to talk a little about women, prisons and justice. The women of Ixcotel are no longer there -- the prison is closed and the women have been moved still further away from the city, where it may be even more difficult for their families to visit. For some pictures from Ixcotel and other Mexican prisons for women, please see photos by Vida Yovanovich as part of her series "Abyss of Absence" -- www.vidayovanovich.com