New Documentary “The Mask You Live In” Dissects Modern Masculinity 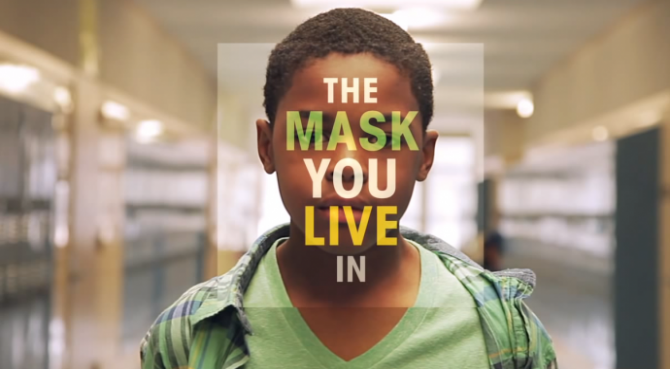 You don’t get more traditionally masculine than Joe Ehrmann. The defensive lineman played in the NFL for eight years, where his job was to relentlessly tackle dudes. So it’s a surprise to hear him empathetically recall his very earliest memory at the beginning of new documentary The Mask You Live In. Ehrmann explains how he viscerally remembers his dad telling him to stop crying—to “be a man.” “That’s one of the most destructive phrases in this culture,” says Ehrmann.

In 2011, directors Jennifer Siebel Newsom and Kimberlee Acquaro put together Miss Representation, an engaging documentary that illuminates many of the myriad ways women and girls are poorly represented in American pop culture. The response to the documentary was resounding—it has been screened in thousands of schools, as it’s a particularly excellent resource for helping young adults develop media literacy around gender representation. After Miss Representation’s release, Newsom founded The Representation Project, a non-profit that encourages people to rethink gender stereotypes. The Mask You Live In, which is currently screening at festivals and upon request, is The Representation Project’s crucial follow-up film dissecting modern masculinity. Like Miss Representation, The Mask You Live In has an accompanying text curriculum (including middle-school-friendly infographics) and is geared toward being screened in educational settings—like school health classes or media workshops—rather than wide-release.

The Mask You Live In weaves personal stories like Ehrmann’s with context from experts on psychology, gender, and media. All together, their voices convey a powerful message: The way boys are taught to be “manly” hurts them and hurts our whole society. The documentary is wide-ranging, touching on everything from superheroes to domestic violence to the school-to-prison pipeline. While it’s sweeping in scope, the documentary does an admirable job explaining how our culture creates masculinity. It makes a point, too, to frame the conversation at the outset by differentiating sex and gender.

“From a young age, we’re taught not to express our emotions,” says educator and anti-violence advocate Tony Porter in the film, explaining how both parents and pop culture impress upon boys that they must not be emotional—boys are often told that being tough means never being vulnerable. That attitude teaches boys to be quiet about their feelings, which leads to repressed emotions bursting to the surface in violent ways. This has wide-ranging consequences. As the film points out, one in four boys is bullied in school—but only 30 percent of bullied boys ever notify an adult. It can lead to a loss of intimate friendships and a reliance on getting drunk to talk honestly about your thoughts. Psychologists note that the “language of emotions” disappears as boys get older—at the same ages that rates of suicide go up. Once they’re in high school, fewer than 50 percent of boys with mental health problems ever seek help. The film connects the dots between a masculine ideal that valorizes lack of empathy and physical force to the creation of a society rife with sexual assault and domestic violence. 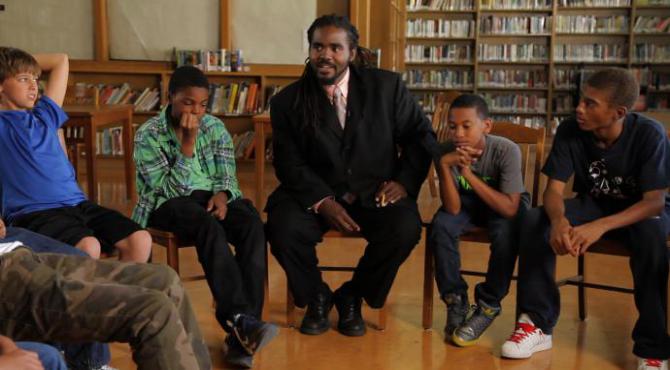 Some of the strongest scenes in the film come during an after-school discussion on masculinity led by Ashanti Branch, an assistant principal in Oakland who works to help his male students build an “emotional tool box.” Branch asks the group of teen boys to take out a piece of paper and, on the front, write the image of themselves they think other people see. The teens write down various responses: funny, tough, strong. Then, on the back, Branch asks them to write what people don’t see. The responses are almost all the same: anger and isolation. As Branch makes clear, traditional masculinity and other oppressive influences—like racism and inequality—force teen boys to don a mask of invulnerability, one that often cuts them off from connecting with the people around them. That’s a tragedy. Branch and educators like him featured in the film aim to redefine “strength” to not mean dominance, but to mean seeking justice and having the bravery to be honest. When one of the boys in the group puts his head in his hands, his neighbor reaches out and silently places a hand on his back—a quiet but profound gesture of comfort and support. Watching that simple but rare action, I felt genuinely moved. 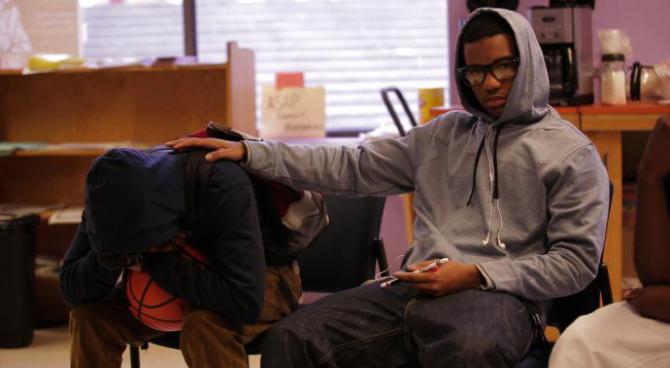 Another moving story in the film comes from Steven, a young dad who’s trying to raise his son, Jacksen, in a more open-minded way than he was brought up. Early on in his life as a dad, Steven resorted to Googling “how to be sensitive.” Now, he has developed many positive ways to support his son’s emotional openness, joy, and creativity. His son suggests they write notes to each other every week in order to tell each other things that are hard to say. Steven is on board for the idea and the resulting notes—placed in an adorable special mailbox—express all kinds of feelings, good and bad. Among all the depressing statistics about the problems of masculinity, it was great to see Steven, Jacksen, and Ashanti Branch offer proactive, positive counter-examples for men. It’s significant to note that the focus of this work is not to “make boys act more like girls” but to try and strip away the negative socialization about toughness and masculinity that’s piled on boys from a young age and rethink gender norms altogether.

People often ask me how men fit into modern feminism. I’m glad that in addition to pointing them to Jackson Katz, Byron Hurt, and Guante, I can now direct people to The Mask You Live In as a tremendous resource for considering how rigidly policed gender rules impact everyone badly. This documentary sheds no tears over imagined misandry, instead picking the more intelligent target: the way forcing a boy to “be a man” will make us all worse off in many ways. As the documentary makes clear, we all have role to play in creating a healthier culture.

Watch the trailer for The Mask You Live In: 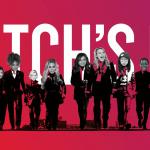