The holidays are here, which means we’re smack in the middle of six weeks celebrating colonialism (hi Thanksgiving), capitalism (hello Black Friday), and really terrible music coming out of every speaker in every public place (“Baby, It’s Cold Outside”). In other words, it’s the perfect time to tune out the noise and pump up the feminist jams. Let us be your Oprah this winter: You get new feminist music! And YOU get new feminist music! EVERYBODY GETS NEW FEMINIST MUSIC!

The video for “Empty Head,” the latest single from rock veterans Screaming Females, is mesmerizing. The band that’s about to celebrate 10 years as an ass-kicking punk trio are releasing their sixth album, Rose Mountain, in February. Things to love about this band: Their un-ironic love of 90s Sheryl Crow. All things Marissa Paternoster. And the aforementioned video for “Empty Head,” which features Paternoster drawing an elaborate Sharpie masterpiece advertising Rose Mountain. Check it out below!

2. Charlie Belle – Get to Know

I’m twice as old as the members of Austin pop-rock trio Charlie Belle, but I still want to be like them when we grow up. Brother and sister Gyasi and Jendayi Bonds started playing instruments before they hit double digits, and played a jaw-dropping Magnetic Fields cover in Gyasi’s bedroom in 2011 (Gyasi, on drums, IS EIGHT) that landed them mainstream media attention. (Side note: my elementary school hangouts were NEVER THIS COOL.) Jendayi, who is a veteran of Girls Rock Camp in Philadelphia and Austin, met future bassist Zoe Czarnecki at Girls Rock Camp soon after, and the trio are finally set to release their debut EP Get to Know in January. As usual, Amy Poehler knows what’s up. Here’s the video for the title track, below!

3. Kristin Diable – Create Your Own Mythology

I first heard Kristin Diable at Jazz Fest, in the singer’s home base of New Orleans, in 2013. She doesn’t tour west of NOLA terribly often, so it was a treat to catch her live in Austin last month in support of her forthcoming album, Create Your Own Mythology, that comes out in February. The soulful singer and guitarist has a room-commanding presence onstage, sounding like the best of Bonnie Rait and Lana Del Rey, with a grit and swing all her own. Lead single “I’ll Make Time For You” is sweet and powerful at the same time. My kind of love song. Hear it below!

DJ and producer Kim Ann Foxman incorporates beats from the electronic music scenes in Hawaii, San Francisco, and New York, where she now lives and works. Foxman started her own record label, Firehouse (named after her Brooklyn studio, which is an old fire station), to amplify the kind of queer, passionate dance music she wants more of in the world. Her latest single, “It’s All About You,” features her own ethereal vocals wrapped in a deep hypnotic beat. Keep up with Firehouse’s releases here and listen to “It’s All About You” below!

Oh Land is the stage name of Nanna Øland Fabricius, an electro-pop producer and singer who makes intimate songs with experimental, catchy soundscapes. Like Kim Ann Foxman, she releases music on her own imprint, Tusk or Tooth, and put out her fourth studio album, Earth Sick, in November. Fabricius operates on the same sort of melancholy/empowering dichotomy that made Robyn’s Body Talk such a blockbuster. Her voice is like a reassuring hand squeeze and a night out dancing with your best friend at the same time. Lead single “Head Up High” is mellow but anthemic. Watch the dramatic, beautiful video below!

Smoky-voiced singer-songwriter Nadine Shah announced her next album, out early next year, with the release of lead single “Stealing Cars.” The song is built on jangly guitar riffs and Shah’s low, urgent, spacious vocals. Her voice is familiar and unique at the same time, comforting in its low register but intense in its delivery. The kaleidoscopic video for “Stealing Cars” lends a surreal, experimental edge to Shah’s performance—the singer says she took inspiration from 70s horror films and their use of repetitive imagery. Her blend of influences and sounds could take her sophomore album in several directions, and we’re waiting giddily to hear more. Here’s the video for “Stealing Cars.”

Purple is a three-person punk outfit based in Austin, propelled by drummer and lead singer Hanna Brewer, who plays with enough raw energy to power a small country. Brewer says she channels the anger she felt growing up in a close-minded small town in East Texas into her drumming. “People say to me ‘You drum pretty well…for a girl,” says Brewer. That cutting remark makes her want to be more badass than the boys. “Anger can be extremely inspiring that way.” 409, the band’s debut album named for their hometown area code, comes out in January. Watch Hanna and her bandmates slam through “Thirteen” below.

8. Instead of the Kate Pierson song “Mister Sister” that we originally had here, check out The Advocate’s list of 37 transgender anthems by transgender artists. Read the comments at the end of this post for discussion on why we pulled this song.

9. Various Artists – The Empress Of The Blues

Our cup runneth over with the glorious all-female lineup featured on Empress of the Blues, a tribute to blues legend Bessie Smith featuring Tift Merritt, Jesca Hoop, Haley Bonar, Jenny Owen Youngs, Abigal Washburn, and many more, released in October. (We wrote about the inimitable Smith and her storied history in jazz and blues music here.) This tribute puts a modern spin on Smith’s standards, and gives each performer featured a chance to reimagine the spirit of each song. One of the grandest departures from the original is Simone White’s cover of “Backwater Blues,” which she transformed into a moody electronic rumination. It’s a testament to Smith’s vision and timelessness that her music stands up on its own half a century after her death, and a testament to her genius that these songs shine through any number of interpretations. Watch the video for White’s cover below, and follow Reimagine Music on Youtube for more releases from the album in coming weeks.

Katie Presley writes about books and music, and tweets about everything else @loveismaroon. She lives in Austin.

"mister sister' is not a feminist song! it's profoundly offensive to many trans women--hardly the trans feminist anthem that Pierson seems to think she's make. Her collaborator on the project is none other than TERF Alyson Palmer. Please don't promote this music--it's so deeply effed that a cis woman has decided to create a 'trans anthem' from entirely outside of the movement, and that she uses collaborators with anti-trans histories.
I know BITCH has demonstrated great trans feminist politics in the past, please make sure that you research how communities feel about things like this awful song before you promote it!

Thank you for reading and commenting. We're striking the Kate Pierson song from our roundup this month, and (always) take reader input about offensive material seriously. I had reservations about this particular song, and posted anyway. The error is mine, and I appreciate (and, in this case, needed) the critique.
Keep reading and keep rocking,
kp 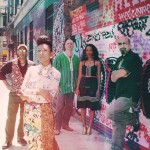