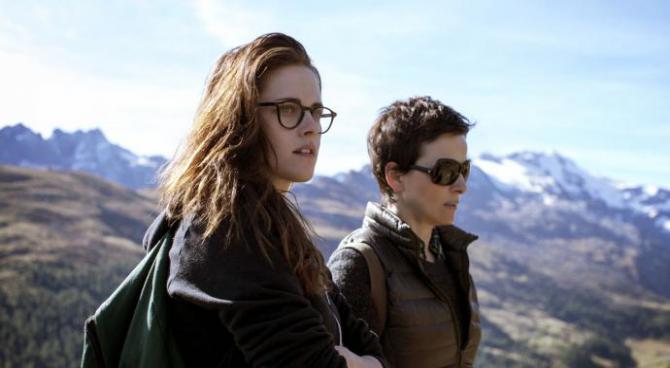 After director Olivier Assayas and actress Juliette Binoche worked together on 2008’s Summer Hours, Binoche said they should make another movie together, on one condition: It should be a female-centric film.  Out of her vision for a woman-driven movie came Clouds of Sils Maria, a contemplative film about acting, aging, and female relationships that portrays the ways life and performance so often interact. After spending a year on the festival circuit, Clouds of Sils Maria came out in wide release in the United States this month.

We enter Clouds of Sils Maria with Valentine (Kristen Stewart) taking a phone call on the train. The train wobbles back and forth while Val hangs up her call, responds to text messages on a different cell phone, and answers yet another call. Val is a personal assistant, and she’s fielding calls from directors as well as the soon-to-be ex-husband of well-known actress Maria Enders, played by Binoche. It makes sense that we’re thrown into this film amidst so many conflicting messages, with so many languages passing by on the train. Sils Maria itself plays out as a study of language’s duality, of the myriad ways one single sentiment, gesture, or person can be interpreted. This idea of multiple interpretations is seen most clearly in the film’s complicated relationship with queerness.

After Val finishes her calls, we learn that she and Maria are traveling to an event honoring playwright Wilhelm Melchior, the man who jumpstarted Maria’s career when she starred in one of his plays over 20 years ago. That play was Maloja Snake, which is about a young woman named Sigrid who seduces and manipulates an older woman, Helena. Maria became a star after she played the young Sigrid—now, decades later, she’s been asked to reprise the play in the role of Helena. 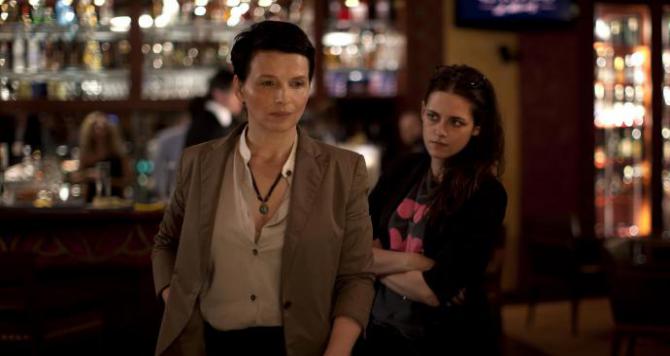 Val ultimately convinces Maria to take the role, and the two travel to Melchior’s home in the Swiss mountains so Maria can study. The two read lines together, Val filling in for Sigrid. Alone in the Swiss mountains, acting out two intense roles, the tension between Val and Maria ramps up. Maria struggles to accept herself as playing the older woman; she still sees herself as the cunning Sigrid, not the pathetic Helena. Maria explicitly expresses her anger at the text for only making Sigrid sympathetic, a not-so-subtle callout of Hollywood for perpetually favoring youth. But what’s fascinating about their line readings is the way the play’s text becomes Maria and Val’s dialogue. The lines between the fictional stage characters and the women reading their lines becomes blurred. We see a lot of their relationship, of how they care about each other, through their readings of Sigrid and Helena.

Very early in the film, Maria says Sigrid’s lesbianism wasn’t important. “I’ve always been straight,” she says, matter of factly. But even without the text of Maloja Snake filling in the dialogue between Val and Maria, there are moments that suggest a deep connection between the two. In one scene, they strip down to swim, neither phased by the other’s nudity, and in another, Maria opens the door to Valentine’s bedroom and sees her sleeping, bare behind exposed, and pauses for a moment. In yet another, Valentine quickly, gently caresses Maria’s hand before departing to her own bedroom alone.

But is queerness simply subtext between these two characters? If you watch the trailer before seeing the film, you’ll likely assume the characters are certainly queer. The trailer’s emphasis on their physical closeness makes it seem as though the film will contain more of those moments of obvious sexual tension, but the trailer includes every potentially sensual moment between the two. In the film, the women’s sexuality remains subtle. On the other hand, while both women are romantically involved with men—Maria is amidst a bitter divorce and Valentine briefly sees a photographer—it’s important to note that these relationships don’t work out. Certainly, any potentially ambiguous sexuality doesn’t need to be pinned down here, but it feels deliberate that the only heterosexual relationships they mention were failures. “The play is an object,” Valentine tells Maria. “It changes depending how you look at it.” And perhaps the same could be said for their relationship.

But no matter how you look at it, their relationship never rises above subtleties and subtext. This wouldn’t have disappointed me at all—except that it made me feel that the trailer is queerbaiting, creating an expectation that the film did not meet. But on its own, as a study of art’s power, the film is stunning and the acting is incredible. Stewart won a César—a prestigious honor in the French film world—for her supporting role, and she’s the first-ever American actress to receive the award. Both she and Binoche shine in the film; they’re electric individually and together.

Jess Kibler is a Portland writer, Bitch Media’s New Media intern, and clearly has a crush on Kristen Stewart.

Thank you for this brilliant commentary! I saw Clouds of Sils Maria last week and it left me sort of stumped. While I enjoyed watching it and was very intrigued by it, in the end I was mainly confused, uncertain what to make of what I saw. So much in the film is subtle subtext, hints, like the queerness of the relationship between Maria und Val. Reading your review made me appreciate the film more, as it helped order my thoughts.Thank you for your insight!

This post has already been written on here a while back. Why is it up again?

This review is new and was published this week because the film is now (finally!) in wide release. But you might be thinking of a review we published when Clouds of Sils Maria was screening at festivals last year. That review focused more singularly on the representation of queerness in the film in comparison to other films like Blue is the Warmest Color, whereas this review discusses more of the movie as a whole.

this is a great review. i saw the trailer about a week ago and thought that anything with Binoche is pretty great, but the breath-holding dynamic just in the trailer was really good. and the author's bio is very cute and funny. :-P