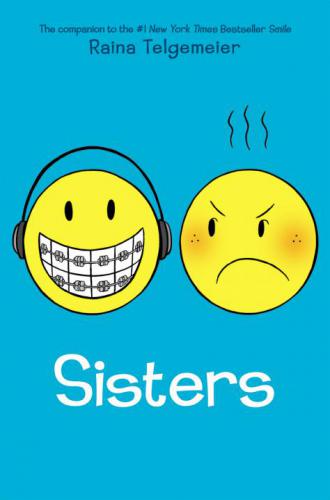 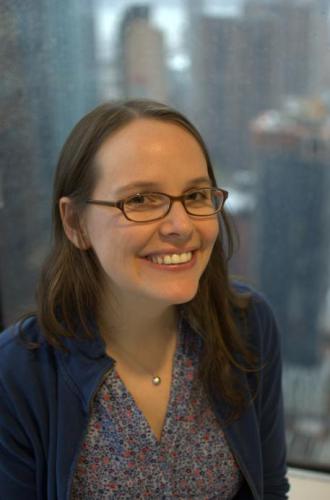 Raina Telgemeier’s new book Sisters is a great read for smart preteens looking ahead to adolescence.

If only Raina Telgemeier’s YA graphic novels had been published earlier, I could have used them as a series of impeccably drawn security blankets to get me through the dark times of adolescence. Her books Drama and Smile remind adult readers why we would never time-travel back to middle school, while preparing her intended audience for the mortifications ahead, such as wearing full-on orthodontic headgear to school or falling for someone who will never, ever be attracted to you.  The New York Times described her work as “part of a boom in smart, wholesome comics for young people.”

In her new book out this fall, Sisters, Telgemeier channels Lynda Barry to expose her ‘90s family life, complete with financial struggle, shouting fests, and a Walkman catastrophically out of batteries. Even the family chameleon is killed by its dinner. During these tragicomic episodes, Telgemeier and her sister seethe and one-up each other at visual arts, while pulling closer together under the surface.

I spoke with Telgemeier about her advice to cartoonists, her family’s reaction to Sisters, and why preteens connect with her stories. First, here’s a sneak peek of three pages from Sisters: 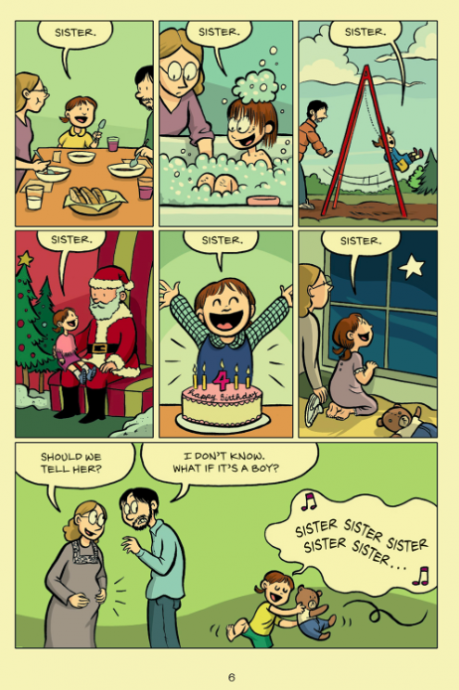 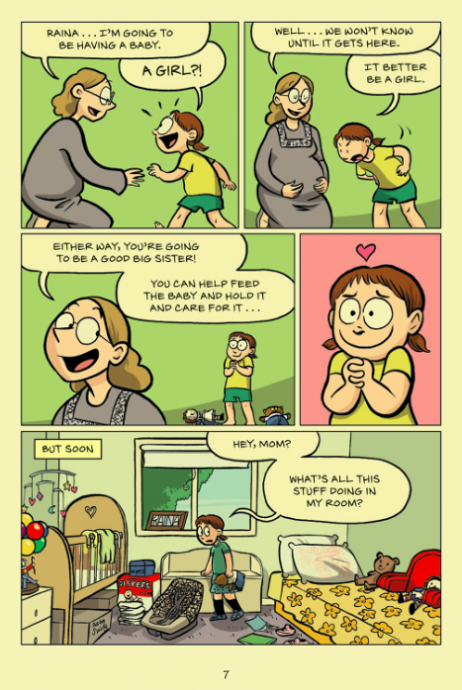 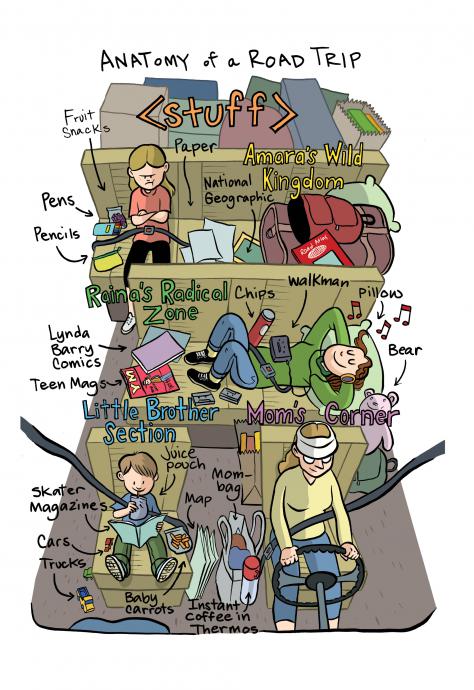 REBECCA HUVAL: My fifth grade tutoring students went nuts over your books and hounded me to buy them, which I did. I feel like your stories prepared them for middle school. How did you figure out a way to write books that young readers love?

RAINA TELGEMEIER: It was a happy accident. I had been keeping diaries from fifth grade to college and they always had a lot of drawings in them. Eventually, Scholastic tapped me to illustrate The Baby-Sitters Club. I had also put the story about my dental experience on the web, and it had two or three readers a week, but when the book was published [by Scholastic] as Smile, I was shocked by how many people were into it. I went from a couple hundred to thousands of readers in a very short period of time. Scholastic recognized Smile was good for middle schoolers. The Scholastic situation and me just telling my story added up to something.

In Sisters, a Lynda Barry book is lying next to you in the van. How has Lynda Barry influenced you? Who are some of your other inspirations?

I think my parents started buying her books around the time I was 10 or 11. Because I like comic strips, I was like, “What are these, can I read these?” They said, “I don’t know if you’ll like her as much.” But I loved her raw honesty, and her characters were way worse than my life. It was a window into someone whose life was really tragic. Kids get something similar out of reading YA novels where the characters are suicidal or wanting to cut themselves, and Lynda Barry captures that state of being. It’s weird to say how helpful that is, but it was cathartic. Her characters are ugly and covered in weird marks, but also really funny and moving. The way her characters speak is so similar to what comes out of real people, and I had never heard that captured so well. Eventually, my parents said, “Alright, Raina, these are your books.” I still have them, but they’re just destroyed and taped together.

Most of my first inspirations came from the funny pages: Calvin and Hobbes by Bill Watterson, For Better or Worse by Lynn Johnson, Luann by Greg Evans, Bill Amend’s FoxTrot. Those are my top four. Optic Nerve comics also spoke to me, probably because of the same reason that Lynda Barry spoke to me—they were bleak but felt true to my experience. Later, I read Bone by Jeff Smith and that made me want to write graphic novels.

What advice would you give to an aspiring young illustrator or graphic novelist?

My advice to any young artist is to do it because you love it. It takes a lot of dedication, and you have to draw the same things over and over again. Cartoonists don’t mind because it’s the only way to get your stuff out there. I also say start small. It’s a great skill to practice, writing short stories and illustrating those, too. It’s great to draw things you’re not good at drawing. I hated backgrounds, and for Baby-Sitters Club, I had to draw dogs, fences, cars and things I never had to draw before. My favorite thing to draw was people. But I had to branch out, and now I love atmosphere and environments. You should draw hands, draw cars, draw horses.

How has your family reacted to Sisters?

They seem to enjoy it, strangely enough. My sister read it first. I insisted that she read it before I started drawing it. I thought she would take me to task, but she helped me remember more about how my brother acted and my family dynamic. She said, “Okay, you can put this out there.” Without that, I wouldn’t have been comfortable publishing it. I didn’t show it to my parents until it was finished, which was a risk, but they liked it and thought it was funny instead of thinking I ripped my family into pieces by putting them on the page. They enjoy the attention. My mother teaches fifth grade, and her students think she’s a rock star because she’s in this book they read.

Your books teach solid values—Drama showed that even if you don’t end up with your crush, you can still have a happy ending. Were you consciously thinking about how young girls might digest your stories’ morals?

Not originally. When I wrote Smile, I wasn’t thinking about who was going to be reading it other than me. I started working with an editor halfway through. I started to feel like, “Oh, I need to make this all make sense.” I leaned more toward a moral with Smile because of the feedback from Scholastic. With Sisters, I wanted to be optimistic about what felt like a bad deal at the time. It’s about my family unraveling as a unit, but knowing you’ve got someone who understands you and has got your back. I don’t write stories to tell a message, but choose the stories I do if the story will make the reader feel better about themselves. I’m sure I’ll write a dark story at some point, but I like closing the last phase of a book and feeling better about the world. I also like happy tears.

Your work deals with some more complex issues. For example: crushing on a gay guy, getting over it, and staying friends. In Smile, you tell a story where you have the courage to say goodbye to your friends if they’re plain jerks, even if it means you’d be lonely for a while. Were you hoping to introduce kids to issues they might not see in their standard children’s books?

Not consciously. I have gone through these things in my own life and felt it was worth sharing and showing people you can go through these things and still go out on top. As far as losing friends, that’s what I had to do when I got to high school, but letting a weight off your back that has been there for a while feels so good, even if you’re alone. And I’m an introvert, so it didn’t feel too bad.

[Her friends’] real life counterparts are both gay. One was really sure of himself, and the other wasn’t, and I fell in love with him. It’s not a good memory, but an integral memory. I’m trying to get at truthful memories. I guess you can call that coming of age.

Who are some of your favorite contemporary graphic novelists?

My favorite YA graphic novelist is Faith Erin Hicks. She’s pulling a lot of inspiration from manga. It’s cool to see her bridging the gap between Japanese comics and American comics and making them specifically for teenagers. Anya’s Ghost by Vera Brosgol is one of my favorites. It has an interesting character living in an interesting world, and starts out as realistic fiction and weaves its way into a fantasy world. I’ve never done something fantastical, and I’d love to do that. It’s great as a standalone. Series have their place, but I love books with a beginning, middle and end.

Rebecca Huval is a writer and editor living in San Francisco.

by Samantha Riedel
Women in comics have deeper problems, like getting work in the first place.