New Netflix Show "Orange is the New Black" is a Complex Look at Sex, Gender, and Prison | Bitch Media

ScreenCultureActivismprisonraceTVqueerOrange is the new Black

New Netflix Show “Orange is the New Black” is a Complex Look at Sex, Gender, and Prison Orange is the New Black—the new Netflix original series premiering July 11—is a prison drama. But that’s definitely not all it is. Following naïve yuppie Piper Chapman (Taylor Schilling) as she enters a women’s prison for a 15-month stay, this rich, tactile show delves into gender and sexuality in a deeper way than first meets the eye.

Yes, Piper navigates the cells and communal showers and guards with nasty mustaches, but Orange is the New Black’s first episodes give women plenty of airtime to speak volumes about themselves in a way that’s rare in mainstream media. By telling the stories of a diverse cast of unique and opinionated women, Orange teaches us that everything—love, adventure, friendship, survival—is about perspective. And by doing so, it prompts us to re-examine our own beliefs about prison, identity, and sexuality.

When we first meet Piper, she’s a “nice blonde lady” with a nice fiancé named Larry (Jason Biggs) and a nice little career in artisanal bath products. It’s not until her past as a cash mule for her lesbian ex-girlfriend’s drug ring is exposed that she is forced to examine her past, confront questions about her sexuality, and go to jail on conspiracy charges. Piper’s optimistic attitude about her sentence (“I’m going to get ripped – like, Jackie Warner ripped. And I’m going to read everything on my Amazon wish list.”) is quickly subverted by the reality awaiting her. Piper’s fish-out-of-water ineptitude provides a good dose of both humor and drama. However, prison seems to be the perfect location for Piper to try to puzzle out who she is, and reconcile her past actions with her current identity. The show is based on a memoir of the same title by Piper Kerman, who spent a year in prison.

Show creator Jenji Kohan is up front about the impact of choosing white, middle-class Piper as a lead.  She told After Ellen:

There’s this whole story about how America is a melting pot, blah, blah, but it’s bullshit – it’s a mosaic. We all live in our little pieces up against each other, and I’m always looking for those places where you can lead into other groups and get a glimpse into these things. That’s what excites me, when you get out of your comfort zone and can experience other people that you ordinarily wouldn’t, and share these experiences and reactions in your own way. Also, you know, Piper’s a gateway drug. I don’t think I could have sold a show about black and Latina and old women in prison, you know? But if I had the girl-next-door coming in as my fish out of water, I can draw a certain audience in through her that can identify with her, and then I can tell all of these stories once she’s in, once we’ve signed onto this journey. She’s just a great entry point for a lot of people.

As far as prisons go, Orange’s is pretty soft. Piper’s official surrender is, amusingly, kind of like doing paperwork at the DMV. Once inside, we see that yes, there are fights and shady bartering, and racism maintains a tenuous system of alliances, but this is not the Oz or Sing Sing that the TV-viewing public is used to. Rather, we see that prison isn’t just a dark and scary place. Instead, prison is a place where people are forced to learn about themselves and others. It’s the setting of nuanced social interactions and is composed of a wide network of complicated relationships. Sometimes, as evidenced by one of Piper’s roommates whose mother is also an inmate, prison is also where families reunite to work out their issues.

In the first few episodes of the season, Piper spends a lot of time trying to figure out how she fits in with the women around her. Her idea of herself (nice, clean, logical) rubs up against her reality, and she’s forced to readjust to make herself fit. (Many viewers will no doubt find this eerily relatable, as they imagine what they would do if faced with a similar situation.) In the first episodes alone, we already see Piper’s perspective of herself change as she adapts to the prison’s barter system and learns the ropes of race division. Just like everyone else, Piper is there because she’s been labeled a criminal; as she is forced out of necessity to fit in, she has to reconcile this as part of her identity, to grow around it.

The deeper exploration of identity doesn’t stop with Piper. A lot of stereotypes are introduced in the pilot, but the show avoids the danger of these characters remaining offensively two-dimensional by introducing plot points that sidestep assumptions. For example, the usual stereotype of age is completely subverted—there is no hint in Orange that youth equals any sort of increased power or value. In fact, it’s the opposite: the elders seem to run the joint. Orange also give illness a twist, with one inmate who sees her massive heart attack as no big deal, and another with cancer who is thankful for the disease because of the preferential treatment it earns her (“No one f-cks with cancer.”). As characters get fleshed out and their backstories unfurl, our perspectives change and we see that, like Piper, they too are greater than the sum of their crimes. History exposes motivations, desires, and pain, revealing that each woman is so much more than her first impression. For example, when the vulnerable former life of “Red” (Kate Mulgrew), the vengeful kitchen boss, is exposed, we see how her quest for respect catapulted her from outcast to iron fist. All in all, Orange is a valuable reminder that identity is complicated, subjective, fleeting, and always a matter of perspective.

The same message is true for sexuality in Orange. Misguided real-life assumptions about queerness in prison are reflected in the show through some of the male characters, such as Piper’s well-meaning but oblivious counselor, Mr. Healy (Michael Harney), who assures her that, “You do not have to have lesbian sex.” Dynamic sexuality is an accepted concept from the very beginning of the series when Piper reveals to her family that she was a lesbian “at the time” of her crime. In a somewhat contrived plot twist, she is forced to confront her latent queerness when she realizes her ex-girlfriend, Alex (Laura Prepon), is confined to the same prison. Alex tries to reconnect with Piper at the same time as Piper’s fiance begins to pull away emotionally (or am I overreacting to the fact that he watched Mad Men without her?), which opens the door for some relationship drama down the road. Add to that “Crazy Eyes” (Uzo Aduba), the inmate who wants to be Piper’s prison wife, and Piper’s romantic situation is rather overwhelming.

As Piper, her fiance, her family, and her fellow inmates are all trying to understand her sexuality, other characters also defy traditional sexual and romantic bounds. One inmate, Morello (Yael Stone), is engaged to a man at home but having a relationship with one of Piper’s roommates in prison. Several points on the LGBT spectrum are represented, putting to rest any notion of heterogeneity in prison with characters like male-to-female transgender character Sophia (Laverne Cox), butch dyke “Big Boo” (Lea DeLaria), and celibate nun Sister Ingalls (Beth Fowler). Sex is seen to serve different purposes for different people, too–for Morello, it seems a matter of convenience; for Nichols, it’s a definite pleasure. The takeaway? People’s sexuality is never as simple on the inside as it looks from the outside. And if your perspective is too rigid, you may come off sounding like ignorant Mr. Healy.

Orange is the New Black is thoroughly watchable and ultimately consuming. It asks its viewers to be open to new perspectives of prison, of identity, and of sexuality, but it also gives a whole lot back: A varied representation of women, plenty of understated humor, and some truly tender moments. Though it looks and feels a lot like other high-caliber cable shows, by its very nature it’s one of the most incredibly diverse female casts onscreen.

Watch the Orange is the New Black trailer below (it features a Rilo Kiley song!): 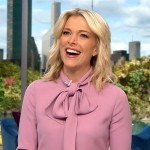