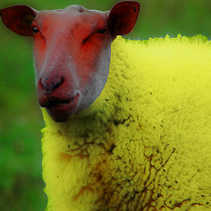 I am a teaching artist, and I work every year with high school creative writing students at the San Francisco School of the Arts. The unit I've designed this year is on the topic of hybrid text, which really is a way to talk to a bunch of brilliant young people about more than just that. This week, we explored questions collectively like: why are people afraid--rather than curious--about the unknown? Why do we equate hybrid with "monster" or "progress" more than anything else? The socio-political topics covered so far have included people transgressing the gender binary as well as multiracial identity politics.

I love teaching, mostly because I love the almost physical process of a young person opening their mind.

And, walking home from school this week, I caught up with an October 2nd episode of WNYC's Radiolab podcast. Radiolab, an amazing show that explores big, philosophical science questions, described this episode on their site as follows: "How do you tell the difference between a sea change and a ripple in the water? Is a peacenik baboon, a man in a dress, or a cuddly fox a sign of things to come? Or just a flukey outlier from the norm? Is there ever really even a norm? In this hour we examine three stories that reframe our sense of normalcy."

Yes, man in a dress was listed as a topic. And, as far as I can tell, Stu Rasmussen--born male and lifelong resident of conservative Silverton, Oregon and our country's first transgender mayor--identifies as both "he" and trans. In what might be the most public example of gender subversion ever, Stu is my new hero. On his site, he addresses his doubters and gawkers with a generous dismissal:

"If you just stumbled on this site you may be asking yourself "Is this guy for real?" or "Is that really a guy?" I'm Stu Rasmussen. I own and operate several small businesses in Silverton, Oregon. I have also served 20 years as an elected official in local government, as City Councilor, Mayor and member of the Silver Falls Library board. I am currently completing my third 4-year term on the Silverton City Council. Now I'm running for Mayor of Silverton (population 9,588). It's a position I have already been elected to twice before - in 1988 and 1990. I just happen to be transgendered - something I didn't even know the word for until I discovered it on the Internet. I've been a crossdresser or transvestite my whole life, only 'coming out' recently and thereby discovering that life goes on very nicely." 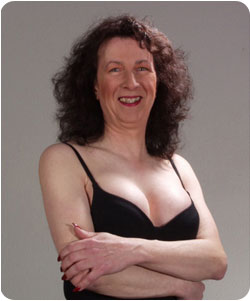 Stu! I would vote for him in a heartbeat. What a testament to what happens when you commit to be your most authentic self.

And Radiolab! Radiolab focused this portion of the episode on the question of what happens when people are challenged in their understanding of what normalacy is. They explore what happens to the townspeople--who are generally a little wary of their mayor's "flamboyance" but whose attitude is that Stu is "just Stu"--when a bunch of evangicals from the plains come to town and march in their streets with that special brand of hateful nutjob zeal that we all know so well i.e. "Your Mayor is Going to Hell and So Are You." "God hates fags" (Stu, by the way, is in a thirty year relationship with a woman. And I'm pretty sure that, if God exists, s/he doesn't hate anybody but that's beyond the scope of this blog). Anyhow, they were charming, as per usual.

The important part is that the townspeople--get this--retaliate by crossdressing and staging a response protest of their own in Stu's defense!

WHAT? Yes. Big, burly Oregon men in dresses, standing up for their transgender mayor because he is their friend. This confirms my long-held theory that, in a certain way, the revolution will begin in smaller communities. I am from a small town, and my best friend and I were openly queer around the time that Ellen's coming out episode shocked the world. And--though often uncomfortable to varying degrees--people were kind to us, by and large.

In this episode of Radiolab, Stu cries when recounting his amazement at people he'd known his whole life--people who seemed to tolerate his "eccentricities" but not quite understand them--marching down the street in dresses and suits in solidarity. I got choked up, myself. What does this say about what is possible?

If people in Silverton can remember that a person is defined by their spirit, by their history, by their generousity and bravery and by every incarnation of what they have been--than maybe everybody can be given the room to grow into who they are. For the sake of the youth I work with, for my sake, for yours--I really want to believe that that is true.

Amazing--the story, the writing. Page, this made my heart swell. 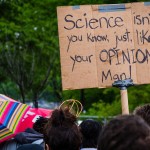 by Sarah Mirk
Behold! Using the power of science to interrogate societal assumptions around race and gender!