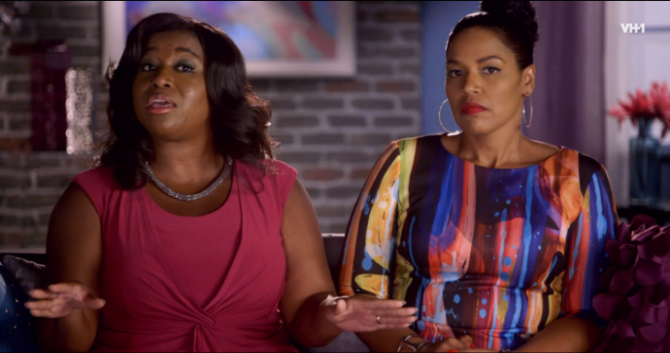 This summer, Lifetime premiered Girlfriend Intervention, a makeover show aimed at helping “basic” white women conquer life’s challenges with the assistance of a quartet of Black women.  The show purports to be helping these unfortunate white women discover their “true selves.” Unfortunately for any viewers with a shred of social consciousness, that journey to their “true self” involves channeling the stereotypical “strong Black woman” that the show claims is inside every white woman, just waiting to bust out.

Although the show was widely criticized, it was apparently popular enough that VH1 decided they, too, needed to catch this racist money train while they could. This past week, VH1 debuted a similarly themed racial-makeover show called Bye Felicia. For those who don’t know, “Bye, Felicia” is a phrase used in the Ice Cube movie Friday, and has become a meme used as a way to dismiss someone.  On the new show, two Black women help the white women of L.A. say “bye” to what is ostensibly their inner Felicia. 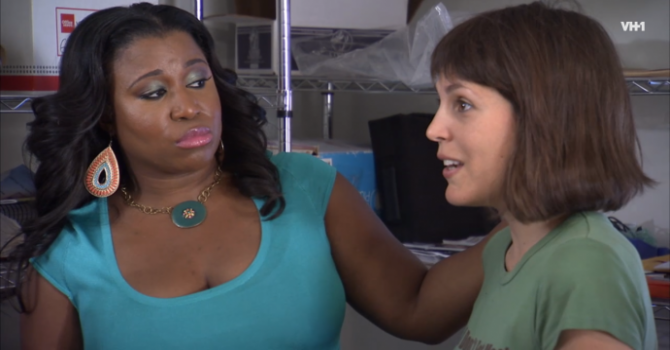 On one episode, Deb and Missy counsel Monique, a “raw vegan activist”

Having watched both Girlfriend Intervention and Bye Felicia, I have to say that at least the actual dialogue in the latter doesn’t involve repeated blatant assertions about the essential nature of Black womanhood (e.g. “A Black woman would never be that comfortable letting herself go” and “All sistas have a signature style”). Perhaps learning from the criticism leveled at Girlfriend Intervention, the creators of Bye Felicia decided the best way to get across racial stereotypes was to do it implicitly. In that spirit, the stars (Deborah Hawkes and Missy Young) are serving us some serious sassy Black woman action—complete with all the neck-rolling, rhyming, and girrrrlll-ing we’ve come to expect from portrayals of Black women on TV. Now, this may or may not be how Hawkes and Young behave off-screen. If it is, that’s all fine and good; I’m not mad at them for it. Hell, I engage in plenty of “ratchet” behavior from time to time. In the grand scheme of things, whether it’s an act or not, the ultimate responsibility for popularizing this type of entertainment does not fall on their shoulders.

The cast of Girlfriend Intervention.

On Girlfriend Intervention, Tanisha Thomas (the woman responsible for making over the white women’s “souls”) states: “We’re four Black women taught to always have it together.”  Have no doubt that the ideal of the “strong Black woman” and the impetus to embody that ideal is alive and well. The fact that it’s become something to be admired and even emulated by white women speaks to the lack of insight so many white people have into the lived experience of Black women. Inner strength is not something Black women are imparted with along with some extra melanin and nappy hair. Being raised with the pressure to “always have it together” isn’t some type of organization technique or life hack.  It’s more a defense mechanism that young Black girls learn to help us in a world where we are reviled. It’s a defense mechanism that white women, on the whole, have not been forced to develop.

The idea of Black women being called on to impart their essence into a white woman in order for her to become empowered is laughable, when you consider the fact that actual Black women are systematically disempowered in American society. Yet when viewed in the context of the social construction of an essential Black culture, and white folks’ subsequent appropriation of said culture, it makes total sense. Why not pick and choose the most desirable aspects of what you’ve created and incorporate them into your own identity? Why not then shame the people whose culture you stole, reconstructed, and marketed back to them for engaging in those same activities? Why worry about the historical significance of your actions when nothing other than the protests of those occupying a lesser social status compel you to do so?

For example, Kim Kardashian feels free to participate in a photoshoot that is reminiscent of the exploitation of Saartjie Baartman, brag about it, and not think twice—even after the significance of the imagery is pointed out to her. Miley Cyrus probably still honestly believes there was nothing wrong with her performance at the 2013 MTV VMAs, or with uttering tripe like “I feel like Lil’ Kim is who I am on the inside.” And Iggy Azalea, a white woman from Australia who spent nary a day of her life in any type of hood, now apparently runs a musical genre in which respect for most Black female artists is still absent—but refuses to provide any real support to the Black community when things get real. Instead, she basically instructs us to contact our local representative. Paul Mooney’s quote from Chappelle’s Show seems apropos of this foolishness: “Everybody wanna be a nigga, but nobody wanna be a nigga.”

Black men are complicit in promoting this simultaneous appropriation and devaluing of Black womanhood. In fact, they’re often the ones handing out the passes to these white women. T.I. backs Iggy Azalea, Miley Cyrus has gotten the high sign from Juicy J, 50 Cent, Snoop Lion, and Pharrell. And the Kardashian sisters… well, they’ve been emboldened enough that Khloe thought reposting a meme stating the trio was “the only KKK to ever let Black men in” would fly. While Black women are taught to protect Black manhood at all costs because our men are demonized by the rest of the world, Black men are not instilled with the same level of loyalty. This was painfully evident after the publication of Beverly Johnson’ s recent piece for Vanity Fair saying that Bill Cosby drugged and assaulted her. Johnson states:

As I thought of going public with what follows, a voice in my head kept whispering, “Black men have enough enemies out there already, they certainly don’t need someone like you, an African American with a familiar face and a famous name, fanning the flames.”

Despite the fact that Johnson reiterated her knowledge of the hardships they face, many Black men still vilified her for daring to come forward, and continued to defend Cosby. So, it’s really not surprising that when we protest at seeing aspects of ourselves that are derided by society appropriated by white women, the pushback from Black men who are so inclined is invariably that we’re just jealous. Because, you know, that’s our nature.

Shows like Girlfriend Intervention and Bye Felicia serve to not only promote stereotypical views of how Black women behave, but to reinforce the antiquated notion that Black womanhood exists only in the context of white womanhood. Black women are useful when we can uplift white women—in this case, by helping them empower themselves by adopting an attitude Black women have developed in response to centuries of racist oppression. These shows are not mindless entertainment; they’re a modern-day, serial re-enactment of the scene in Gone With the Wind in which Mammy laces up Scarlett’s corset and cautions her against eating too much in front of the men. We’re still playing that supporting role, still in the shadow of a standard of womanhood constructed by white women—we’re just allowed to trade the kerchief for a weave.

Tasha Fierce is a Black feminist writer, blogger, and Los Angeles native. Her work has been featured in Jezebel, The Huffington Post, Racialicious, Clutch, and Corset Magazine. She blogs about race, politics, sex, and pop culture at Tastefully Ratchet. You can find her on Twitter as @misstashafierce.