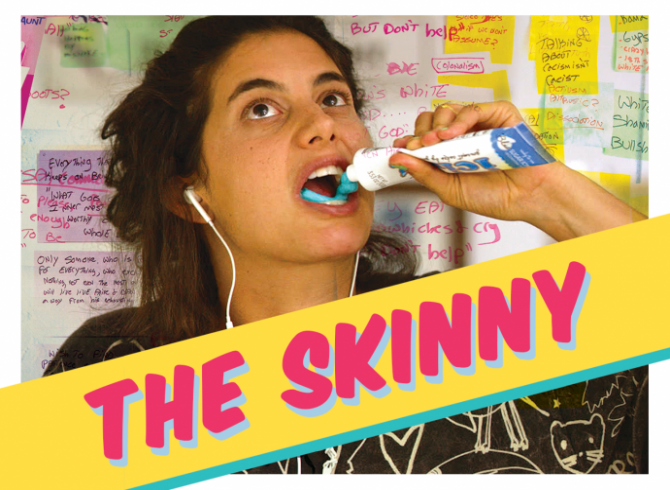 Jessie Kahnweiler is a comedian who revels in tackling tough topics. Her new webseries, The Skinny—set to debut on Wifey TV this spring—is a dark comedy about an LA comedian trying to live, love, and get over her bulimia. The main character is based off of Kahnweiler, whose own experiences with bulimia inspired her to write the series. After the success of her video Meet My Rapist, a seven-minute short film about a young woman coming to terms with sexual assault in her past, Kahnweiler continues to push the comedic envelope. In The Skinny, she confidently embraces a topic mainstream media is hesitant to touch and does so with good humor and tact.

The Kickstarter-funded series is still in production, but judging from the available clips, Kahnweiler’s jokes land successfully at the intersection of funny and tragic. Her style focuses on the levity of dark moments, as perfectly captured in a moment from the teaser video: Kahnweiler’s character is taking a huge bite out of a head of lettuce while talking on the phone with her mother, who asks through the headset, “What are you eating?” Kahnweiler replies with her mouth full, “Nothing. I’m cleansing.” The moment seems absurd, but it also highlights the severity of bulimia by representing some of its manifestations: over-eating, secretiveness, and insistence that one’s habits are healthy. The Skinny portrays a more realistic, complex view of eating disorders than we often see onscreen. It shows that women with eating disorders can feel sad, embarrassed, or ashamed, and still have moments of happiness and humor. 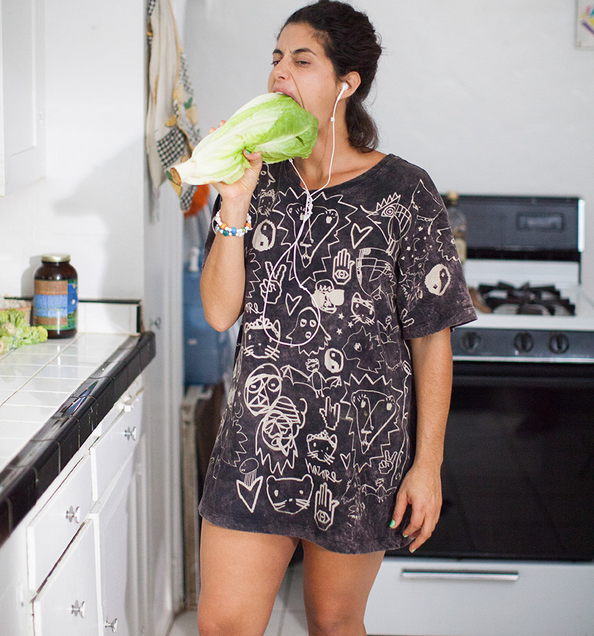 The thought alone of joking about eating disorders likely makes some audiences uncomfortable, but Kahnweiler approaches the subject with honesty and rawness. As she mentions in a recent interview with HLN, “When you’re going through something hard, it’s never really just funny or just sad or black and white. I really wanted to stay true to this experience and be vulnerable and honest. And to me honesty is comedy.”

Discomfort is actually integral to the success of her dark comedy. The Skinny works because it catches audience members by surprise and plays with their level of comfort. It does so by highlighting the ridiculousness of a culture that is so hostile to women that anorexia, bulimia, and binging are commonplace. “Comedy is not about, ‘Oh, let me make fun of something,’” Kahnweiler told me in an interview recently. “It’s just [pointing to] the absurdity of what it means to be a human being.”

By highlighting some uncomfortable truths, Kahnweiler doesn’t use jokes to assert power over anyone struggling with an eating disorder (i.e. to insist they suffer more or feel ashamed). Instead, she shares power with them by suggesting that they are not alone, that help is available, and that their stories are worth telling. “I’m getting criticism that I’m making fun of eating disorders or trivializing it,” she says. “But this is my experience. Say your experience. There are so many different narratives.” In making this comedy about her own story, Kahnweiler allows us to think more deeply about eating disorders and the people affected by them, instead of erasing them altogether.

Kahnweiler’s work to realistically portray a woman’s experience with bulimia brings to light some larger concerns about mainstream media production and consumption. In her description of the idea behind The Skinny, Kahnweiler explains the resistance she met while pitching the series to mostly male media executives. “At the end of my pitch, (insert white dude name) would sweetly reveal, ‘There’s nothing funny, or more importantly, sexy about eating disorders,’” she writes. 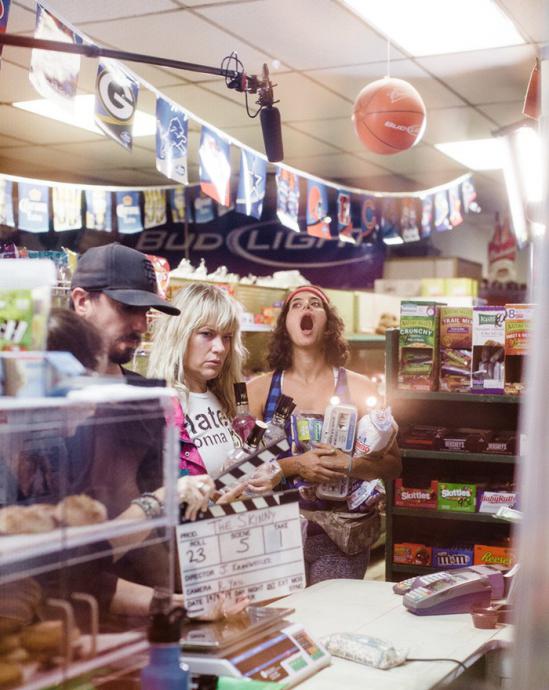 Like Kahnweiler, many women creators are limited by this double bind: they are told that their stories won’t connect with audiences, aren’t likable, or aren’t not sexy enough. For Kahnweiler, the hesitance men in the industry expressed about the need for a bulimia-comedy emphasized how important it is for her, a female comedian struggling with her own bulimia, to tell this story. “I refuse to wait for ‘the man’ to give me permission to speak,” she writes, in her half-joking-actually-serious style.

When characters with eating disorders show up onscreen, the discussion of the disorder often falls flat. The reality of how complex living with one can be is lost. It only makes sense that Kahnweiler, as a comedian and a woman who has struggled with an eating disorder, would take the comedy into her own hands.

In an article called “We Need To Laugh About Eating Disorders,” Kahnweiler writes:

“I’ve always been a television addict and relied on the screen to help me understand myself and the world around me. But I never saw anything that resembled my fucked-up experience with food. The few Lifetime-esque shows and movies that did tackle eating disorders only made me feel more alienated, because I didn’t look or act like those girls. I wasn’t a prima ballerina or Kelly Taylor on 90210—I wasn’t even skinny.”

Related Reading: We Crunched the Numbers on How Much Stagetime Female Comedians Get.

Claire Tighe is a Chicago-based writer. Tweet her @ecofeminismo.

Very into this! As someone who has gone through 10+ years of the roller coaster that is bulimia (and continues to work on recovery every day - 1 year & 5 months purge-free, bitches), this is something I can really get behind. If the Kickstarter wasn't closed, I would have definitely backed this. Looking forward to its premiere.

I guess it's somehow healthy to add humor to this, possibly providing levity. The tragedy is that it already is massively buoyant, and adding the addition of humor likely will normalize the issue.