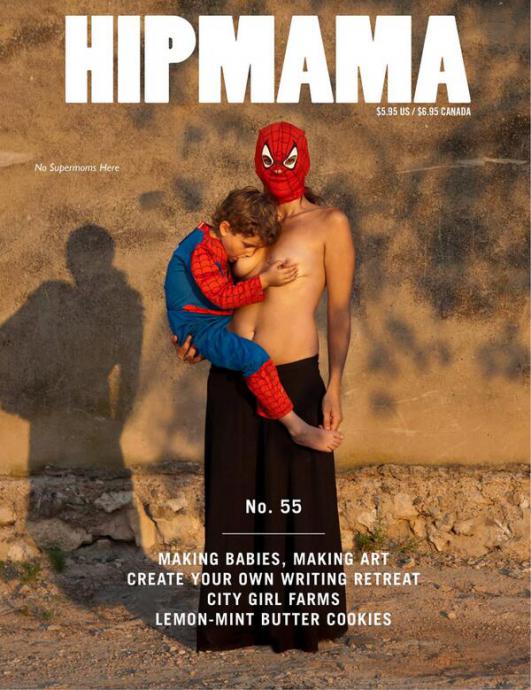 Long-running alternative parenting magazine Hip Mama just re-launched its print edition this spring and it’s already making waves. The cover of its 55th issue was banned from Facebook and newsstands.

Barcelona artist Ana Alvarez-Erreclade’s self portrait seemed like a natural choice for the new issue of Hip Mama, which will come out on Mother’s Day this May. The cover shows Alvarez-Erreclade breastfeeding her four-year-old son, who wears a Spiderman costume, next to the tagline, “No Supermoms Here.” When Gore posted the image on Hip Mama’s Facebook, the cover got a lot of love, but also some backlash; complaints ranging from “nudity” to “open breastfeeding” to concerns about the age of the child prompted Facebook to ban the image. Hip Mama’s print magazine vendors were quick to follow, with several vendors telling Gore that they would not be shelving the magazine because of its cover.

The image is certainly striking—it’s a bold contrast to the typical covers of women’s magazines that feature scantily clad celebrities.  Alvarez-Erreclade isn’t wearing any less clothing than women on recent covers of Rolling Stone and other mainstream magazines, but her attitude in the portrait seems defiant rather than demure. As Gore told website The Stir, “It doesn’t bug me at all to see another mother breastfeeding her child in a self-directed image that isn’t exploiting anyone. It didn’t occur to me that anyone would raise an eyebrow. I figured that if anyone didn’t like breasts, they would, as I do when I see images I don’t care for, mind their own business.” Faced with pulling the magazine from newsstands or changing the cover, contributors and editors decided to add a big red dot to the newsstand version of the magazine. 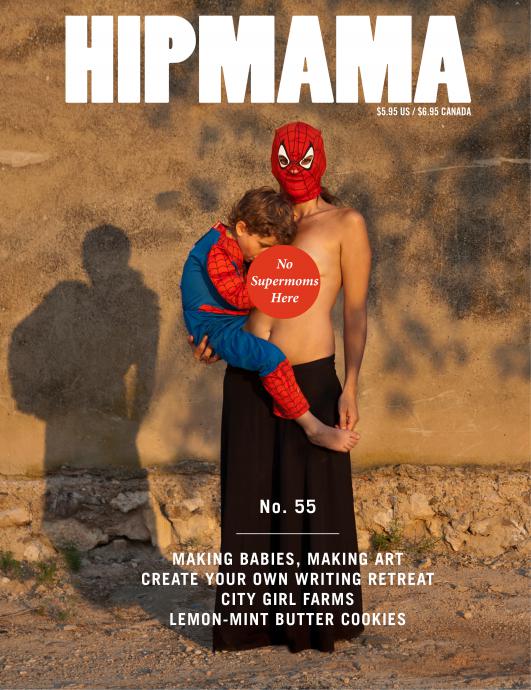 People can still see the original cover and order a copy of the magazine with the uncensored cover online. On Hip Mama’s site, Gore points out the irony of backlash over women breastfeeding in public, while media is full of images of women’s boobs being used to sell products, “We are asked to go into seclusion to feed our kids. This, while truly offensive sexist images are in our face daily in the name of ‘sex sells’ and deeply disturbing and exploitative images of violence go unchecked in news media, marketing campaigns, and on social media.”

Related Reading: In Her New Memoir The End of Eve, Ariel Gore Breaks Down Myths About Moms and Daughters.

Remember the TIME Magazine cover from May 2012, of the conventionally pretty blonde woman whose three-year-old son stood on a chair to reach her breast? All under the headline "Are You Mom Enough" (for attachment parenting)?

The cover elicited lots of responses but I don't remember it being banned.

Doesn't seem quite fair for Hip Mama, does it?