As part of Mattel and Barbie’s spring line (I didn’t realize she HAD a spring line, let alone any “line” at all), the newly inked Barbie comes with a set of tattoo stickers that can be placed on her body as well the body of her owner. 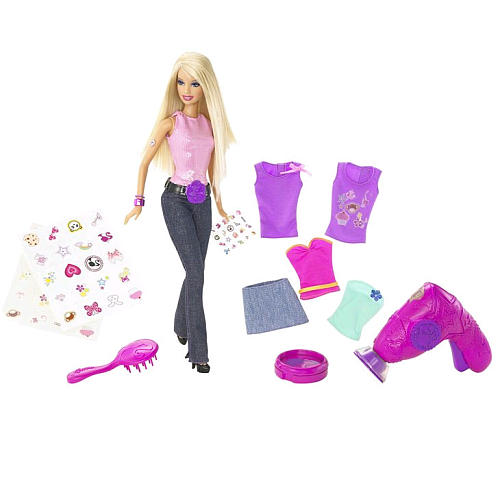 The object on the far right? That’s a tattoo gun. Well, more like a water gun so kids can apply the washable tattoos wherever they so please.

To be quite honest, I’m not quite sure what to think of this. On the one hand, it’s great to see what is arguably THE most pointed-at object of unrealistic representations of women “wear” something that, statistically, 1 in 4 women have and could signal a shift of opinion over the perceived taboo nature of tattoos. Plus, the tattoos offered are pretty innocuous and standard fare of butterflies and flowers - though I think some poorly translated Kanji, barbed-wire and Yakuza tattoos could’ve been thrown in there as well.

However, this IS still Barbie and Mattel we’re talking about here. I can’t help but think this is another instance of corporate appropriation, like what MTV did with street/graffiti culture. Obviously, there’s been an uproar about this new Barbie with many parents saying they would never buy it for their daughters as it “encourages girls to show off their bodies,” especially when the median age for Barbie owners is 10 to 13. Mattel has stated that they are not planning on discontinuing it as apparently, sales have been doing very well. Well, at least the Toys R’ Us stock is out.

What do you guys think? Are these parents overreacting or are they right to be concerned?

Totally Stylin’ Tattoo Barbie could soon evolve into the following! 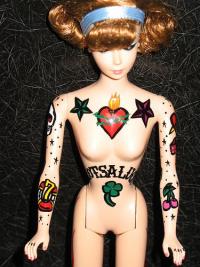 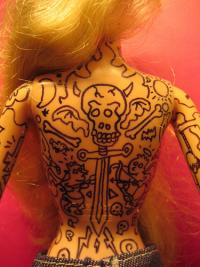 Barbie broke up with Ken because he is gay? I know it's been a myth for a long time but I love, love, love believing it. ;-)

Belin, I cracked up at your "poorly translated kanji" comment...which is saying a lot on this Monday. Didn't one of the Spice Girls get a messed-up "girl power" tattoo? That's what I want to see for Barbie. I suppose failing that, the sh*tty "tribal" pattern around the Ken heart is going to have to do.

Also I like to think that Barbie's brown friends, who never got the pink clothes or the best accessories when I was growing up, are apparently too smart for this whole embarrasing-drunken-tattoo-choice thing. One is a graphic artist who has some beautiful pieces of her own design; the other has no tattoos at all but recently pierced her chin. Or whatever...I get to make it up, right?

Well THIS is a new development...I'm not exactly sure what I think about it either...but I guess I could sum it up best as follows:

I'm fine with tattoos. I love tattoos. However, I DO have a problem with the fact that some people get them without sufficient thought. I believe that a lengthy amount to time should go into deciding whether or not to get inked, and that there should some sort of meaning behind one's body art. I'm not a big fan of the, "I just got a butterfly on my hip because it's just SO cute!!!" kind of tattoos. Unfortunately, I don't see this Barbie sending that message-she's got stereotypical, impersonal patterns that defy the traditional permanence of the art. Really, this sort of thing just enforces the bad reputation ink gets. If I was a parent, I would object to my child getting this toy on those levels. I would much rather give my child a sharpie and a new doll and say, "You can draw anything you want on this toy, but once the art is there, it has to stay, so think about it."

I've got to say, I agree that a more creative outlet for this idea, and definitely cheaper, would be to pick up an older Barbie at a thrift store for a child, and like this poster said, hand them a Sharpie. The idea of tattooed women as equally beautiful is indeed a positive one, as tattooed women (depending on the quantity, content, etc. of their tattoos), can be stigmatized as unfeminine. However, I don't think that this doll is really putting out that message, especially as it pretty much deducts from the creative possibilities the children have in terms of choice of tattoos.

Plus, in her aged wisdom Barbie has to know that if you get a name tattoo, it spells doom for the relationship...Ken won't be around for long. Not to mention that getting a man's name permanently inscribed on your body is usually not the most independent and empowering action.

Try again Mattel, not quite there.

I really love how parents are upset about this, of all the things Barbie is fucked up for and perpetuates in girls, it's the tattoos. If they're concerned, they should be concerned about all the pink, the unrealistic body image, all the things we already know are bad about Barbie. And you're right, Belin, total corporate appropriation. This is weird. What's next? Body piercing Barbie with piercing gun and stud accessories? Pink ones, of course.

Right on, Ashley. If Barbie is causing any trouble for young women, it's sure as hell not due to some stick-on body art. I'm still smarting from not getting my boobies...ever. Screw you, Babs, screw you.

I don't care if this might make tattoos more palatable...it wreaks of corporate BS.
Speaking of Barbie, anyone see the latest freak model of the Devil Doll?
http://hateonme.com/2009/02/16/barbie-eating-disorders-are-fun/

And clipping coupons has to do with Barbie how? 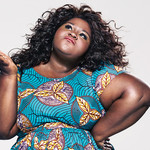