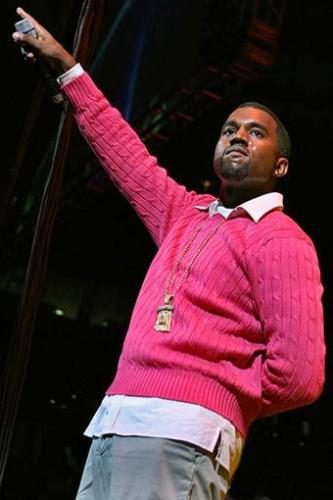 On Monday night, Kanye West will be the featured performer on VH1’s Storytellers, the show that gets songwriters to perform in an intimate setting, in the hopes that they will open up to the audience and explain a bit about their creative process, or whatever else might be on their mind. For anyone acquainted with Kanye (who happens to write the most prolific celebrity blog on the web), you know you don’t need much to get him talking. The results are always uncensored and frequently entertaining. But what you won’t see on the show are a few choice comments that ended up on the cutting room floor, one or two in particular that should give any feminist pause.

In the excised footage (three hours of performance was edited down to a 90-minute show), not only did Kanye try to be an apologist for Bitch’s Douchebague du Jour, the partner-abusing singer Chris Brown (“can’t we give Chris a break?.. I know I make mistakes in life,” he told the audience”), he also seemed to give the increasingly odious O.J. Simpson a pass on his crimes, calling him “amazing,” and not in a bad way.

I should say that I am a fan of West’s music. I even find his off-stage personality and antics fascinating and even endearing for the most part, and I think he’s one of the more complicated and intriguing artists in hip-hop. And judging from remarks he made about Michael Phelps that did make it into the show, a charitable reading of his mental state might suggest that he was making a case for judging someone’s works separately from their personal imperfections.

But there’s a world of difference between, say, a continued affection for the music of James Brown and actually advocating that he be excused for the spousal abuse that seemed to plague his marriage. When an artist of Kanye’s popularity asks the audience to give Chris Brown a pass on what even he admits was an instance of domestic violence, he’s crossing the line from entertaining to harmful.

Disturbingly, most artists seem inclined to give Chris Brown a break, or at least seem worried enough about breaking some sort of rule of professional decorum that they can’t do the right thing and stand up for Rihanna in what seems to be an obvious case of right and wrong. It’s probably too late in the day to still hope that our celebrities will be more aware of their status as role models, but at this point I’d be happy if they’d just shut up.

Having not seen this missing footage (wherever do you get your hands on such an awesome thing?), I'm wondering outloud if Kanye really meant letting Chris off the hook, to imply that it is no big deal. I really doubt it. When everyone else was keeping mum, Kanye was one of the first to come out and take a stand for Rhianna. Within days of the incident, Kanye told Ryan Seacrest:

“[Rihanna] has the potential to be, you know, the greatest artist of all time and, in that sense, I feel like [she is] my baby sis,” added West. “I would do any and everything to help her in any situation.”

“I feel like, just as a person, I don’t care how famous she is or even if she just worked at McDonald’s, that should never happen. It should never come to that, to that place.”

I don't know what he meant when he said what he did, but I know that after reading all the hate and vitriol being spewed online about both Chris and Rhianna, I feel like its time to step back and get focused on what needs to happen and what we want for both people.

I hope with my whole heart that Rhianna has a team of witnesses standing beside her, holding her pain with her, remaining vigilant to her needs, being with her as she gains her life back, her sense of self and a freedom from fear.

Truthfully, I wish the same for Chris, and that his love is a tough love. That he too is surrounded by people who truly love him and who will demonstrate that love by holding him accountable to a path of healing and restoration.

I write about the issue of privacy, abuse and celebrity in my blog here:

Aspen, this was a wonderful comment and I truly appreciate your generosity of spirit concerning all parties involved in this really unfortunate situation. I had indeed read Kanye's earlier comments (and should've alluded to them), and was surprised by this more recent turn, especially when he tossed in a comment about O.J. And I'm completely willing to believe in the possibility that Kanye was, like you, sick of the media circus and tornado of hate erupting on blogs and forums across the internet, and was just wishing everyone would take a more measured approach to the situation.

Sadly, I think that he sort of bungled things, if that was indeed his intent. By mentioning Brown in the same breath as O.J., he's confusing the issue and increasing the amount of vitriol. I don't think that West is the worst offender in the Chris Brown apologists' camp, and I think that ultimately he's probably a pretty decent sort of fellow, but I just wish he would be more careful about what he says about these things.

And I didn't actually see the footage. Reuters had a story about it on the wire this weekend, complete with full quotes, so I based my story on that. I should've mentioned that in my post. 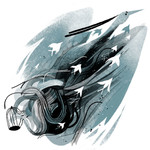 by Lexie Bean
Those of us living at the intersection of nonbinary and survivor are forced to reconcile with others reshaping their bodies and needs.