So, great. Tons of women (and men) writing thoughtful, nuanced critiques of how media sexism has played—and will continue to play—an indelible role in Clinton's campaign and the discourse around it, and Pappas has to come with a series of statements so packed with the worst stereotypes about feminism and essentialist "sisterhood" they could have been written by the staff of the Onion.

National NOW president Kim Gandy issued a terse, if indirect, statement of respect for Sen. Kennedy's choice, and several other NOW chapters have rushed to emphasize that Pappas does not speak for them. Today's New York Times, in typically irritating style casts the whole debacle as part of a larger generation divide within feminism — I don't even have the energy to explain my frustration with the article, but luckily the awesome Veronica at Viva La Feminista summed it up beautifully.

So now I'm torn: On the one hand, I'm completely sick of the conversation around the issue of whether sexual politics and biases are being employed to an egregious level in this election season. Obviously, they are: Is it really even a question? On the other hand, addressing and mitigating this whole Pappas incident requires a whole new cycle of dispatches emphasizing, once again, that this election is about a lot more than women matching their own plumbing to that of their candidate's. I'll read them, but I won't be happy about it.

Relevant: On TV, One Character Can't Represent an Entire Culture 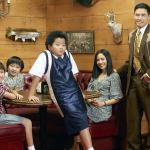 by Evette Dionne
"Fresh Off the Boat" points out the burdens of representation carried by the few realistic characters of color on TV.